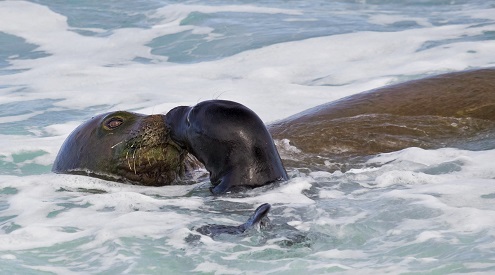 The bill passed the House on a bipartisan vote in June. The Senate bill now has 42 cosponsors overall, including 16 Republicans.

“This bill will make a critical difference for many of Hawaii’s highly endangered native wildlife species and give our state agencies the capacity they need to address the threats these species face,” said Colleen Heyer, President of the board for Conservation Council for Hawai’i. “We are deeply grateful for Senator Hirono’s support of this important bipartisan effort to protect the wildlife heritage of our islands.”

The bipartisan bill will send $59.1 million to the Department of Land and Natural Resources (DLNR), which the agency will use to implement its wildlife action plan. Roughly 6,252 local species would benefit – including the ‘īlio-holo-i-ka-uaua (Hawaiian monk seal), Koholā (humpback whale), and U'au (Hawaiian petrel).

Representative(s) Ed Case and Kaiali’i Kahele are among the more than 230 representatives that voted to pass the Recovering America’s Wildlife Act through the House.

"The Hawaii stamp of approval from both Senator Hirono and Senator Schatz will be a key reason why this bill makes it to the president’s desk,” said Collin O’Mara, president and CEO of the National Wildlife Federation. “There's no such thing as a Republican palila bird or a Democratic humpback whale and this bill shows that wildlife conservation can still bring Congress together, even in these divided times.”

At least 15 percent of the funds will be used to help species already designated as endangered or threatened. Federally recognized tribal nations would share $97.5 million annually to fund wildlife conservation efforts on tribal lands.