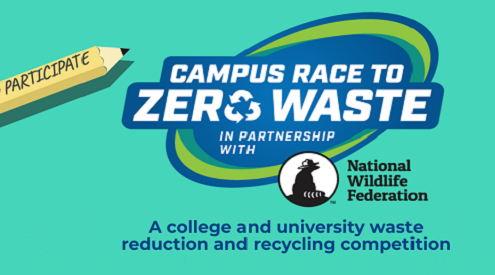 “The commitment of colleges and universities to relaunching and strengthening initiatives to engage students, faculty and staff in advancing waste minimization and zero waste efforts on campus this year was deeply impressive, particularly considering the challenges facing campuses due to the pandemic,” said Kristy Jones, director of higher education programs at the National Wildlife Federation. “Programs like the Campus Race to Zero Waste inspire and motivate students and environmentalists across the country.”

During the 2022 Campus Race to Zero Waste competition, campus participants donated, composted and recycled 27.9 million pounds of waste, keeping more than 200 million single-use plastic containers out of the landfill. As part of the annual competition, each year the Campus Race to Zero Waste (formerly RecycleMania) program calls for best practice case studies from campuses across the U.S. and Canada to showcase programs and strategies in waste minimization, food waste reduction, and education and awareness. The case study resource is an opportunity to gain recognition for campus efforts to reduce waste and to share helpful information for campuses that are working on similar efforts.

Winners are recognized in four categories: waste minimization, food waste reduction, education and awareness, and summary of waste minimization efforts over a year or more. Judging is based on criteria including creativity, transferability (how easily could the initiative be replicated), and measurable impact.

Food Waste Reduction Winner:
Chapman University increases awareness about post-consumer waste by collecting all the uneaten food from Randall Dining Commons for a lunch period and weighing it (California).

Summary of Waste Reduction Efforts Winner (efforts over more than one year):
University of Nebraska Lincoln designs and implements a pilot project focused on standardizing recycling efforts on campus to reduce waste and improve recycling. (Nebraska)

The 2023 Campus Race to Zero Waste competition is open for registration, learn more at www.CampusRacetoZeroWaste.org

About Campus Race to Zero Waste

Campus Race to Zero Waste – formerly known as RecycleMania – is the nation’s premier waste reduction and recycling competition among colleges and universities, managed by National Wildlife Federation, and governed by RecycleMania, Inc.

Campus Race to Zero Waste has been helping campuses minimize waste and improve their reuse and recycling efforts, since its launch in 2001. Today it is the nation’s premier waste reduction competition among colleges and universities, in partnership with the National Wildlife Federation. To date, over 1,100 colleges and universities in the U.S. and Canada have participated in the Campus Race to Zero Waste program, diverting more than 1,100 million pounds of waste through minimization efforts, donation, reuse, composting, and recycling. Through these efforts, campuses have also prevented the release of nearly 1.68 million metric tons of carbon dioxide equivalent, which is comparable to removing over 346,000 gas engine passenger vehicles from the road for one year.