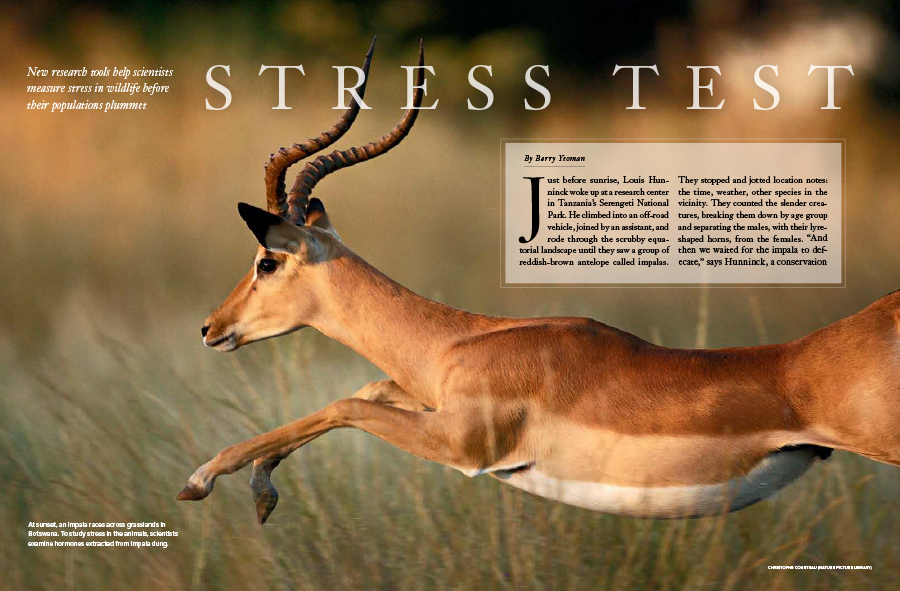 At sunset, an impala races across grasslands in Botswana. To study stress in the animals, scientists examine hormones extracted from impala dung. (Photo by Christophe Courteau/Nature Picture Library)

JUST BEFORE SUNRISE, LOUIS HUNNINCK woke up at a research center in Tanzania’s Serengeti National Park. He climbed into an off-road vehicle, joined by an assistant, and rode through the scrubby equatorial landscape until they saw a group of reddish-brown antelope called impalas. They stopped and jotted location notes: the time, weather, other species in the vicinity. They counted the slender creatures, breaking them down by age group and separating the males, with their lyre-shaped horns, from the females. “And then we waited for the impala to defecate,” says Hunninck, a conservation biologist now at the University of Illinois Urbana–Champaign. “Basically, to poop.”

The fecal samples they collected (stored on ice until brought to a University of Massachusetts–Dartmouth lab) contained a trove of information about how much stress the impalas were under. By measuring the concentrations of stress-related hormones and analyzing them alongside the environmental data, Hunninck could infer which human activities took the heaviest toll on the impalas’ bodies.

Called wildlife-stress physiology, this branch of science has been flourishing lately—with big implications for conservation. Measuring how stress affects individual creatures, scientists say, could serve as an early-warning system for populations in trouble.

“The traditional approach is that we monitor populations, and we see that they are declining. And that often takes several years,” Hunninck says. “And then we try to figure out what is causing this. And only then do we try and figure out how to stop that threat. And that can take many decades.”

Yet threats can be sublethal before they become lethal, and that’s where stress research comes in. “If you can predict what human activities—whether that’s hunting or tourism or building roads—will do to an animal population by looking at what it does to the physiology of one animal or group of animals,” Hunninck says, “you can start to prevent population declines before they happen.”

In 2020, Hunninck published some of his findings in Conservation Physiology. By examining stress hormones called glucocorticoids, he found that concentrations were highest during weeks without rainfall, when the vegetation impalas eat dried up and shed some nutritional value. Climate change is likely to bring more such droughts in the future.

Hunninck looked at local factors, too, including the proximity of Maasai cattle grazers, who live in clusters of thatched-roof huts. Impalas living near denser human settlements had higher glucocorticoid levels. But those settlements had a smaller impact than the dry weather and parched grasslands—suggesting that impala survival depends primarily on addressing global issues such as climate disruption. “Even with this grazing pressure, the Maasai are not the issue here,” Hunninck says. “It is bigger drivers of change that are more important.” 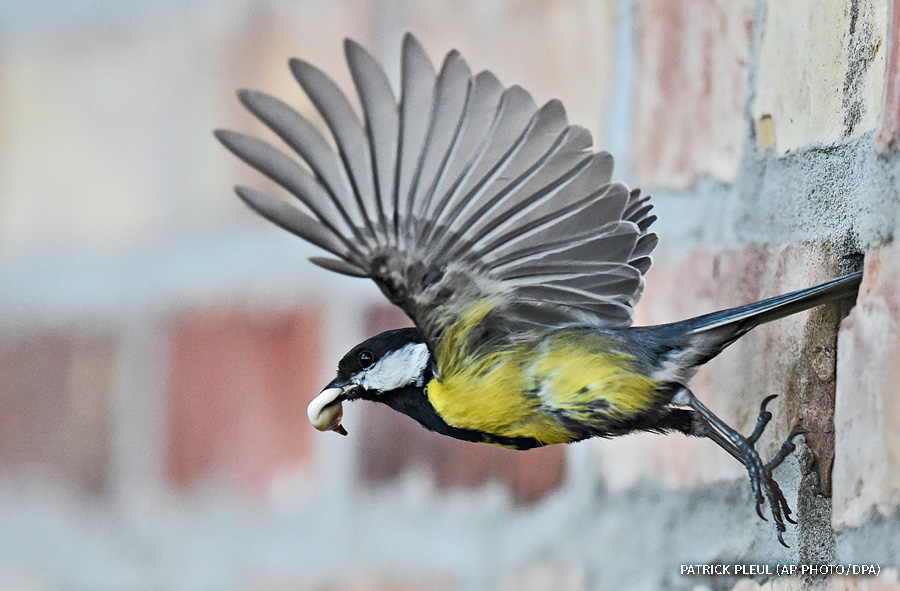 A great tit exits a nest hole (above) in Petersdorf, Germany, one of many European cities where the birds seem to be adapting to stressors such as noise. In Tanzania, impalas (below) are more stressed by drought than by human neighbors.

Stress in the city

It should come as no surprise that wildlife-stress physiology is enjoying a moment. Two critical factors have converged: the need and the technology. First, there’s growing public alarm over climate change, pollution and habitat destruction—human activities that threaten wild animal populations. It’s clear something needs to be done, but first researchers need to understand the problems.

Meanwhile, tools to measure stress have grown more sophisticated, less invasive and easier to use in the field. “Instead of assuming that some ecological stressor is going to be bad or good for an animal,” says Michael Sheriff, a physiological ecologist at the University of Massachusetts–Dartmouth, “we can actually go and ask the animal itself.” 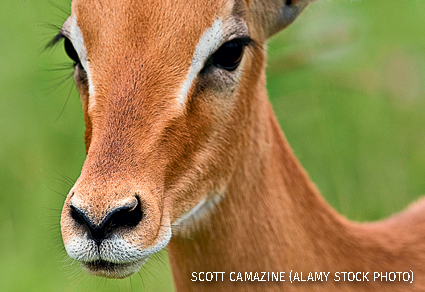 One promising tool uses telomeres, the caps that anchor the ends of chromosomes and keep them from degrading. In many animals, including humans, telomeres shorten over time, like a biological timer counting down. The faster they shrink, the faster an animal ages. “When you have environmental stress, the telomeres will shorten at a much faster rate,” says Caroline Isaksson, an ecophysiologist at Lund University in Sweden.

Isaksson studies great tits, European songbirds with black stripes running down their yellow chests and squeaky calls that sound like bicycle pumps. Ranging across the continent, they have expanded from woodlands into cities and suburbs. But urban areas are full of stressors: noise, dirty air, artificial lights. There’s plenty of food (ample white bread, for example), but it’s less nutritious than what rural birds eat.

To examine the birds’ chromosomes, Isaksson drew blood samples and extracted DNA. Great tits raised in cities, she discovered, had shorter telomeres. When Isaksson nest-swapped 2-day-old tits—moving country-hatched birds into city nest boxes and vice versa—she found the place of origin didn’t matter. It was where the birds grew up that governed their telomere lengths. “So it’s really an environmental effect,” she says. Following the same birds into the next season, she learned that the shorter its telomeres, the less likely a chick would grow into a breeding adult.

But chicks that did reach adulthood seemed to adapt, and Isaksson says that inheritance might play some role. In a study published last year in Nature Communications, she analyzed the DNA of great tits from nine European cities—including Glasgow, Barcelona, Paris and Milan—and their rural outskirts. No matter where they lived, the urban birds had evolved quickly, particularly in genes linked to cognition, circadian rhythms and behaviors such as aggression. They were more similar to one another, in fact, than to their closest rural neighbors. “They have to be tougher and more resilient,” Isaksson says, “to live with high densities of humans and traffic and noise and all these different factors that normally would freak them out.”

Stress is not always bad. This can be easy to forget because chronic stress exhausts us. It makes us restless and irritable. It takes a toll on our thinking, mental health and immune systems. But moderate stress keeps us alert. It powers us through deadlines and helps us respond to crises.

Likewise, for wildlife, stress is two sided. It can be lethal at its worse, says Sheriff. But at lower levels it can have “adaptive benefits,” helping animals cope with punishing environments.

Sheriff has studied snowshoe hares, which live in North American boreal forests in a violent pas de deux with Canada lynx. The hares have camouflaged coats that change with the season and giant hind legs that leap 12 feet at a time—tools for evading their feline predators. But lynx have sharp ears, good eyes and reflexes that have evolved to catch hares, which make up the majority of their diet.

The two mammal populations oscillate in tandem. From the U.S. Rockies and Appalachians into Canada and all the way up to Alaska, abundant hares provide a feast for lynx, whose population surges in response. Then the hares’ numbers plummet, and their predators’ numbers soon follow.

As a Ph.D. student in the 2000s, Sheriff wondered if stress plays a role in these fluctuations. Traveling to spruce and willow forests of the Yukon, he livetrapped hares and collected blood and fecal samples to measure glucocorticoids.

When lynx were plentiful, he discovered, hares had elevated hormone levels. In an experiment, Sheriff simulated high predation risk by penning some of the hares and exposing them to a trained dog. Just seeing and smelling the dog reduced their survival rates, even though they had no direct contact. “So, being scared to death,” he says, bluntly.

In the wild, stressed female hares had fewer and smaller offspring. This might sound like a problem, but Sheriff calls it adaptive: Fewer young cuts down the amount of time mothers must forage to feed them. “Lighter babies eat less,” he says. “Fewer babies eat less. So it allows mom to not have to expose herself to predators as much. Because if mom dies, it doesn’t matter how big you are. If mom dies, you die.”

Sheriff also discovered that the offspring of stressed mothers had high glucocorticoid levels as well, even if they had never seen a lynx themselves. Those hormones are linked to fear behaviors such as hiding, which he speculates help the young survive.

“If those babies weren’t fearful at all, but there were a whole bunch of predators wandering around, all those babies are going to be eaten,” he says. “They just wander up the meadow and get picked off.” 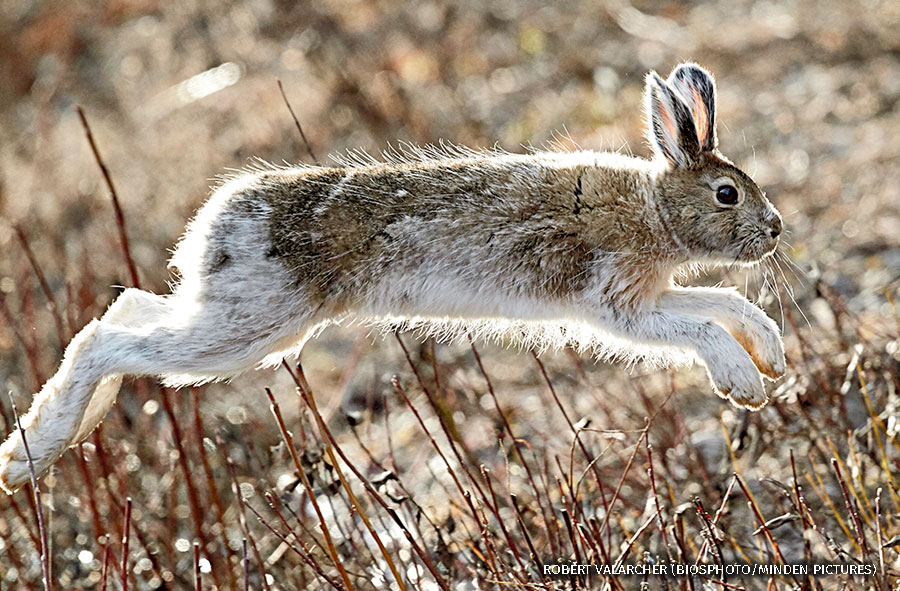 By measuring stress hormones called glucocorticoids, scientists found that snowshoe hares (above) have higher levels when their primary predator, Canada lynx (below, feasting on a hare), are plentiful. The hares’ resulting fear responses help them avoid capture.

To discuss some of the recent findings from wildlife-stress research—along with implications of the work—Bernhard Voelkl, a biologist at Switzerland’s University of Bern, invited 11 colleagues to a Swiss mountain chalet last year. Participants, including Isaksson (via Zoom) and Sheriff, talked about advances in wildlife-stress biomarkers as well as their own research on animal species ranging from pandas, polar bears and grizzlies to squirrels, snowshoe hares and birds. 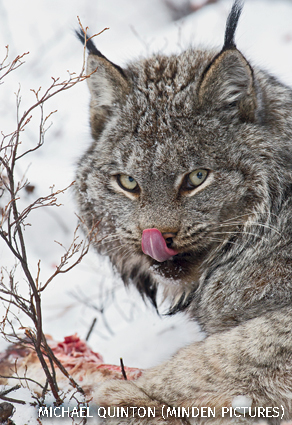 Many of the scientists were concerned primarily with population health. Others had a different focus: the well-being of individual animals. These two branches of science tend to operate independently, and some of those at the gathering hoped that a bit of cross-fertilization might benefit everyone (including the animals).

This shifts the paradigm a bit. “Our concern for animal welfare has been limited to animals in our custody: farm animals, lab animals, pets, zoo animals, circus animals,” says Hanno Würbel, an animal-welfare scientist also at the University of Bern. But humans play a growing role in managing wild populations and the ecosystems they inhabit. “And so the boundary between wildlife and animals under our care is becoming increasingly blurry,” Würbel says. What’s more, he adds, wildlife and welfare scientists have each developed tools that can help the other.

For Voelkl, there is a moral component. “We acknowledge that animals are sentient beings,” he says. “There is a broad societal consent that humans should not inflict unnecessary pain and suffering.” The plight of a single creature can arouse the public—as with a popular 2017 video of an emaciated polar bear in the Canadian Arctic. No matter why that particular bear was starving, the video made a convincing case that melting sea ice caused by climate change threatens to decimate the species.

That can make it hard to separate conservation and welfare. “Very often, what is good for the individual turns out to be good for the population and vice versa,” Voelkl says. Scientific collaboration, it seems, could only benefit both.

Barry Yeoman is a writer based in Durham, North Carolina.