Bison: Bring Them Back

Montana has millions of acres of native prairie habitat just waiting for bison to return. Once covering North America by the millions, bison were driven to the brink of extinction by the late 19th century. We saved them, but just barely. Most bison today exist as captives in refuges or as privately owned livestock. No wild bison freely roam native prairie habitat in Montana. 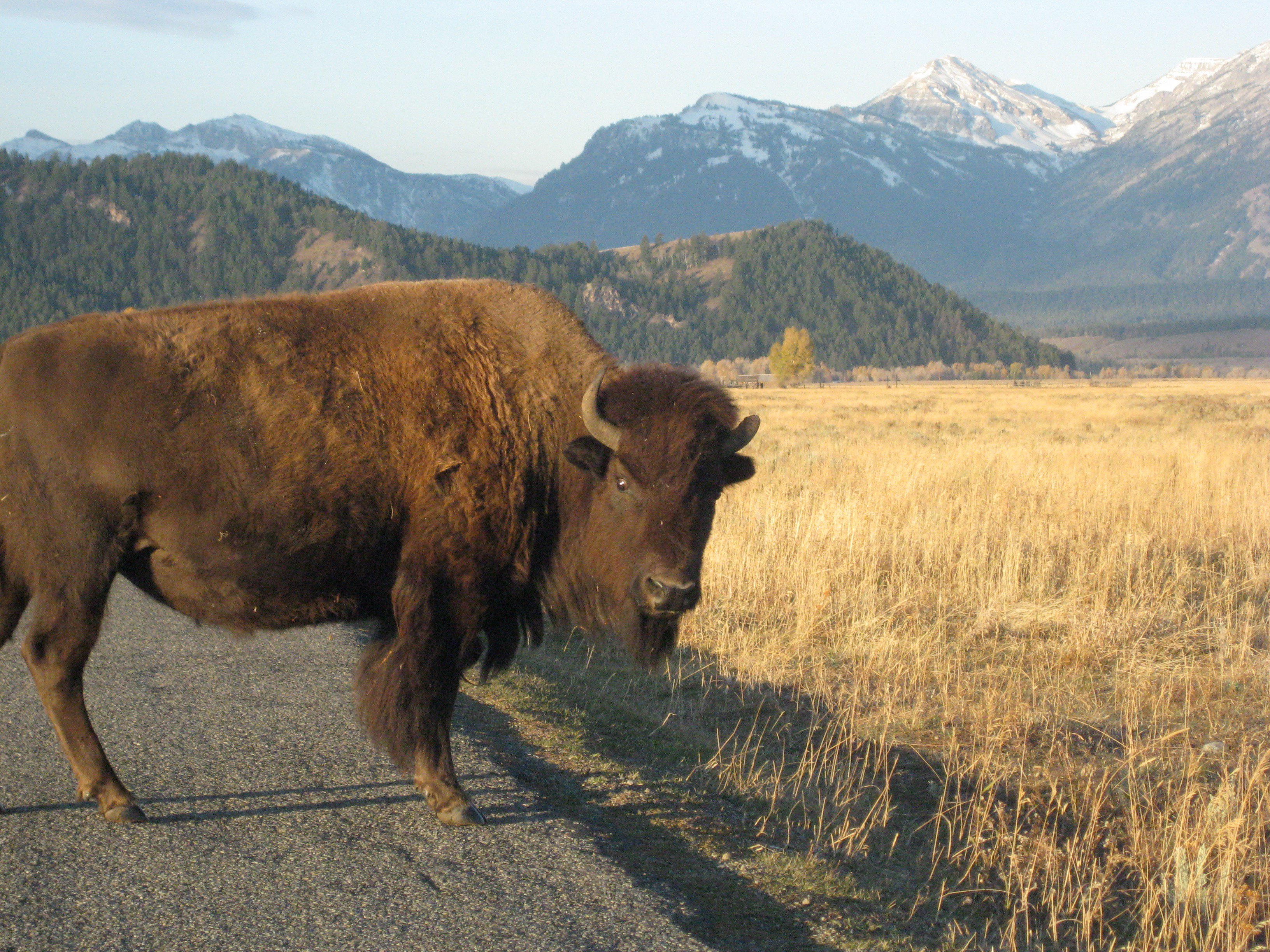 The National Wildlife Federation is working to restore wild bison to native prairie habitat across millions of acres of public land in north-central Montana. Saving bison from extinction was one of America’s earliest conservation successes, but we only saved the animal—not its ecological function. Nearly all the bison in America today exist in small captive herds in parks and refuges—or, most commonly, are privately owned as livestock. The National Wildlife Federation is committed to restoring a significant herd of truly wild bison to Montana’s million-acre Charles M. Russell National Wildlife Refuge as part of a broader vision—shared by many partners—of creating a multi-million-acre prairie reserve encompassing the refuge and the millions of acres of adjacent public lands.

This video was produced with thanks to the Eastern Shoshone tribe, the National Wildlife Federation and the coordinated efforts of a host of other individuals and organizations.

The National Wildlife Federation (NWF) has partnered with tribal governments and other partners to return more than 250 bison to tribal lands, ensuring tribal connections to bison for generations to come. By bringing bison back to reservations, we are revitalizing a landscape, habitat, and a diversity of wildlife, while also re-establishing Native Americans’ cultural and historic connections to wildlife and the land.

Jason Baldes, NWF Tribal Partnerships – Tribal Bison Coordinator, has worked to restore wild bison to their historic lands. In a recent blog post, Jason outlined the goals and accomplishments of the partnership between NWF and tribes in Montana and Wyoming: “Over the last 25 years, the National Wildlife Federation’s Tribal Partnership Program has worked with Tribes to bring wild buffalo back to our lands and cultures. We believed that Yellowstone buffalo, the last free-roaming wild herd in the United States, offered a way to start new conservation herds rather than see the buffalo shot or slaughtered when they migrated outside park boundaries. In 1997, a solution was proposed: a pasture facility where buffalo could be held, deemed healthy, and then made available for restoration to tribal and public lands.

“In 2012, after 15 years of hard work and legal battles, tribes, the National Wildlife Federation and bison conservation partners succeeded in working with the state of Montana to transfer 64 Yellowstone buffalo to the Fort Peck Tribes in Montana. The next fall, 34 of those Yellowstone buffalo were transferred to the Fort Belknap Tribes in Montana to start their own herd. In another landmark victory in November 2014, we successfully transferred 136 Yellowstone buffalo to Fort Peck. But this was just the beginning. The Eastern Shoshone Tribe on the Wind River Reservation now maintain 31 buffalo, and the Northern Arapaho Tribe has recently established a herd of 10 buffalo.”

The Montana Water Rights Protection Act (also known as the Flathead Water Compact) was jointly introduced by Montana Senators Steve Daines and Jon Tester and will give management of the National Bison Range to the Confederated Salish and Kootenai Tribes—where it belongs. Learn more about bison and the Montana Water Rights Protection Act in this document and in this blog post.

Hunters have played a key role as conservationists and have achieved tremendous success in restoring America’s native wildlife. This is especially true of bison. Yet there is much work to be done and restoring wild, free-roaming bison to suitable habitat on public land could be the crowning success of the hunter-conservationist.

While we may never again see vast herds of bison, the State of Montana is studying the possibility of establishing a significant herd of wild bison in the 1.1-million-acre Charles M. Russell National Wildlife Refuge and millions of acres of adjacent public land. The Refuge is a sprawling expanse of undeveloped prairie habitat already dedicated to wildlife restoration and conservation, and it’s contiguous to millions of additional acres of superb habitat on public land. This land remains virtually unchanged over time and is just waiting for bison to return. Charles M. Russell National Wildlife Refuge in Montana is the absolute best place for wild bison–all accessible and open to recreational use, as well as hunting.

See our Hunters for Bison Outdoors and Facebook pages to get involved. 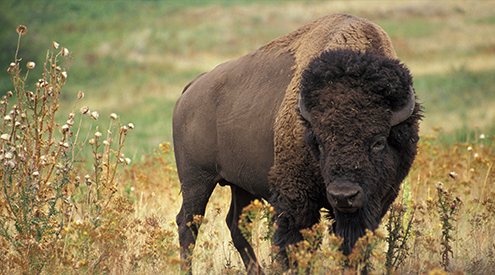 Restoring Bison to the CMR

The National Wildlife Federation has a vision to return bison to their native home in and around the 1.1-million-acre refuge. 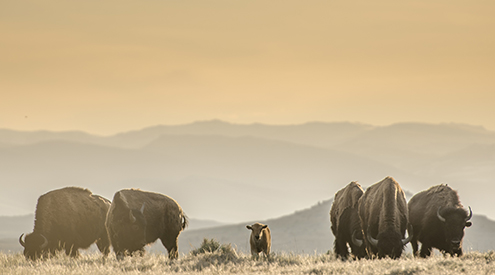 Stories Intertwined: How Bison Create a Network of Healing

The history between Native Americans and buffalo is not a story that everyone knows, but our histories are intricately intertwined–and that story should be shared with all Americans. 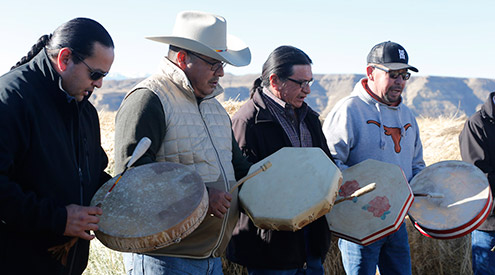 When a Treasured Relative Returns

A reverent gathering of tribal members celebrates the return of bison to their land. 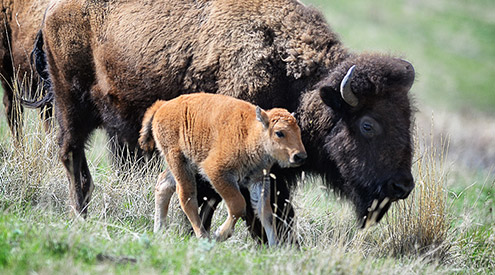 Do you care about bringing bison back? Sign the petition to support restoring thousands of wild bison to millions of acres of native prairie habitat on tribal lands!

4 Wildlife Species That Need Your Help This Wildfire Season