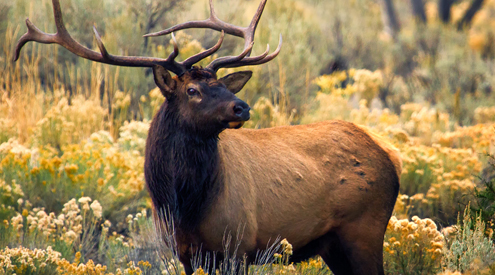 WASHINGTON, D.C. — The National Wildlife Federation and Congressional Sportsmen’s Foundation, two of the nation’s leading conservation and outdoor advocates, urged members of the U.S. Senate to show up for hunters and anglers by supporting the Great American Outdoors Act. The bill, which is the most important conservation legislation to receive an up-or-down vote in decades, would expand access for hunters and anglers, invest in critical wildlife habitat and public lands, and strengthen the nation’s outdoor heritage for generations to come.

“America’s public lands are the birthright of all Americans and the foundation of our outdoor heritage. Every U.S. Senator can demonstrate their commitment to revitalizing our public lands and connecting all Americans with nature — including millions of hunters and anglers — by showing up and supporting the Great American Outdoors Act,” said Collin O’Mara, president and CEO of the National Wildlife Federation. “The Great American Outdoors Act is the most important conservation bill to go before the U.S. Senate in decades — and would create hundreds of thousands of desperately needed jobs, while ensuring that wildlife and our public lands endure for every man and women eager to cast a line or hunt for wild game.”

“The Great American Outdoors Act is a once-in-a-lifetime opportunity, ” said Jeff Crane, president of the Congressional Sportsmen’s Foundation. “This legislation not only takes historic steps forward to promote conservation and increase access for America’s sportsmen and women, but will also serve as a multiplier by creating near-term job creation at a much needed time, and it is critically important that our leaders show their commitment to the nation by being present when the bill is considered in the Senate. The time is now to pass the bill on the Senate floor.”

The Great American Outdoors Act’s inclusion of funding to address the maintenance backlog on these lands is critical for America’s hunters and anglers. Of 439 million acres managed by the U.S. Forest Service and Bureau of Land Management, 99 percent are open to hunting and fishing. In addition, the National Wildlife Refuge System supports approximately 2.7 million hunting days and nearly 8 million fishing days each year.