Once nearly extinct, a rare parrot is staging a surprise recovery 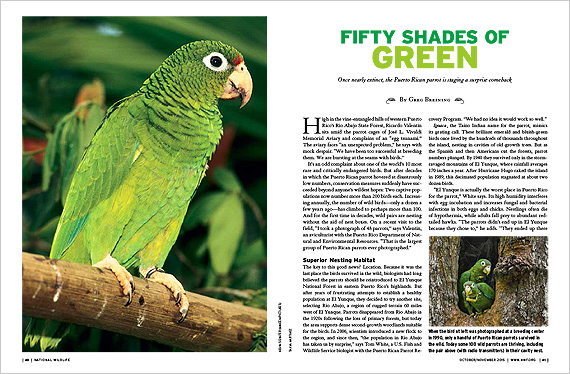 HIGH IN THE VINE-ENTANGLED HILLS of western Puerto Rico’s Rio Abajo State Forest, Ricardo Valentin sits amid the parrot cages of José L. Vivaldi Memorial Aviary and complains of an “egg tsunami.” The aviary faces “an unexpected problem,” he says with mock despair. “We have been too successful at breeding them. We are bursting at the seams with birds.”

It’s an odd complaint about one of the world’s 10 most rare and critically endangered birds. But after decades in which the Puerto Rican parrot hovered at disastrously low numbers, conservation measures suddenly have succeeded beyond anyone’s wildest hopes: Two captive populations now number more than 200 birds each. Increasing annually, the number of wild birds—only a dozen a few years ago—has climbed to perhaps more than 100. And for the first time in decades, wild pairs are nesting without the aid of nest boxes. On a recent visit to the field, “I took a photograph of 48 parrots,” says Valentin, an aviculturist with the Puerto Rico Department of Natural and Environmental Resources. “That is the largest group of Puerto Rican parrots ever photographed.” 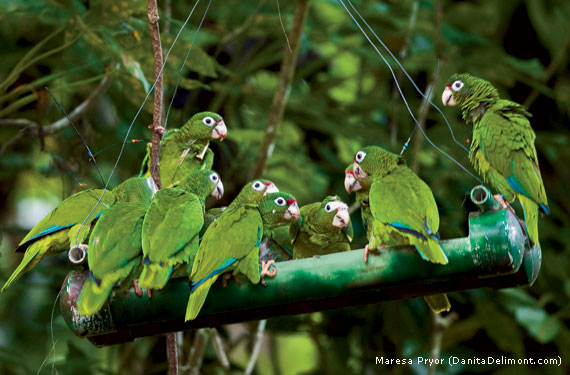 The key to this good news? Location. Because it was the last place the birds survived in the wild, biologists had long believed the parrots should be reintroduced to El Yunque National Forest in eastern Puerto Rico’s highlands. But after years of frustrating attempts to establish a healthy population at El Yunque, they decided to try another site, selecting Rio Abajo, a region of rugged terrain 60 miles west of El Yunque.

Parrots disappeared from Rio Abajo in the 1920s following the loss of primary forests, but today the area supports dense second-growth woodlands suitable for the birds. In 2006, scientists introduced a new flock to the region, and since then, “the population in Rio Abajo has taken us by surprise,” says Tom White, a U.S. Fish and Wildlife Service biologist with the Puerto Rican Parrot Recovery Program. “We had no idea it would work so well.”

Iguaca, the Taino Indian name for the parrot, mimics its grating call. These brilliant emerald and bluish-green birds once lived by the hundreds of thousands throughout the island, nesting in cavities of old-growth trees. But as the Spanish and then Americans cut the forests, parrot numbers plunged. By 1940 they survived only in the storm-ravaged mountains of El Yunque, where rainfall averages 170 inches a year. After Hurricane Hugo raked the island in 1989, this decimated population stagnated at about two dozen birds.

“El Yunque is actually the worst place in Puerto Rico for the parrot,” White says. Its high humidity interferes with egg incubation and increases fungal and bacterial infections in both eggs and chicks. Nestlings often die of hypothermia, while adults fall prey to abundant red-tailed hawks. “The parrots didn’t end up in El Yunque because they chose to,” he adds. “They ended up there because that was the last refuge left for them when Puerto Rico was deforested.”

I met White at El Yunque in 2007, when we climbed a muddy trail up the mountains before daybreak to spy on nesting parrots from a canvas-covered blind. The forest dripped with rain. Morning light barely penetrated dense fog as the harsh calls of adults echoed through the rain forest. Finally, a bright green male with a red forehead alighted near his nest. A female swooped in and dove down the nest’s entrance. On a monitor we watched as the parents jammed their beaks down the mouths of each of two chicks and fed them violently, as if with jackhammers.

Wild birds then numbered about 18. When I talked to White recently, he said El Yunque’s population—despite continued monitoring, maintenance of nesting boxes and release of captive birds—had fallen to perhaps 12.

El Yunque always was important habitat for parrots to find the fruits, flowers, seeds, bark and leaves they eat, White says. “But the nesting habitat was the drier coastal areas with less rainfall, less humidity and different tree species. The birds could nest on the coast, and in five or six wing beats they’re up into some fine foraging habitat.”

But most coastal forest is now gone. In addition, scientists long believed it was essential to try and save imperiled species in their last redoubt—in this case, El Yunque. “All throughout the beginning of the recovery program until probably 15 or 20 years ago, that was the assumption,” White says. Still, he and other biologists argued that a second wild population was needed. “If we stopped management efforts with this particular population, in a matter of years it would probably be gone,” White says. 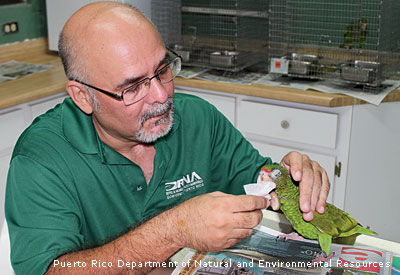 To raise birds for the second population, the Vivaldi aviary in Rio Abajo opened in 1993. Set among limestone outcrops and haystack-shaped hills covered with lush bamboo, ferns and trees, the aviary receives less than half the precipitation of El Yunque.

When I visited Rio Abajo, I expected a tour of the aviary’s nests, but Valentin made clear that wouldn’t happen. “The parrots react violently and viciously to intruders around their nests and have been known to abandon chicks and break eggs if provoked,” he explained.

In preparation for releasing parrots to the wild, Valentin’s colleagues were putting his charges though “boot camp,” chasing birds around the main flight cage to improve their condition and flight skills. To protect them from red-tailed hawks, the parrots underwent raptor training: Trainers would sound a hawk’s reedy cry and pass a hawk silhouette overhead, noting which parrots froze or hid and which continued to squawk and eat. After the same hawk call and silhouette, a trained red tail attacked the cage. Then, in full view of the Puerto Rican parrots, the hawk was set loose on a closely related but common Hispaniolan parrot (outfitted in a leather vest for protection). Now, when the traumatized Puerto Rican parrots heard the hawk call and saw the silhouette, nearly all of them hid, froze in place or looked overhead for danger.

Still, when trainers released the first 22 birds in 2006, each fitted with a radio transmitter, hawks picked off six almost immediately. “The birds that clumped together around the aviary survived,” Valentin says. The aviary quickly became the anchor of a growing wild population. Despite some outliers that fled and managed to survive up to 20 miles away, the main flock orbits the aviary.

Today after nine releases of 133 birds, the Rio Abajo flock numbers at least 72 and perhaps as many as 134. (The lower figure is the number positively identified during the last official count, but parrots can disappear into this rugged terrain for months.) At least 69 birds have fledged from wild nests. Many continue to settle around the aviary cages, creating a flock of captive and wild birds that sounds and behaves much like the flocks of old. The sight of wild parrots wheeling through the forest and the sound of their clown-horn squawks stimulate captive birds to lay. When Valentin checks nests of captive birds, wild parrots swoop in to watch him. “They want to see what mischief I am getting into,” he says.

In 2016 Puerto Rican and federal wildlife managers are planning to begin a third wild flock in the mountains of Maricao State Forest in southwestern Puerto Rico. The terrain is rough, but neither as high nor as wet as El Yunque. And, says Valentin, “there’s a lot of food.”

Wildlife managers have built cages on the new site and will stock them with captive birds before releasing parrots to the wild. They hope that, as in Rio Abajo, the caged birds will act as a magnet for released birds.

Biologists see this third population as insurance against disease or hurricanes that might decimate the other flocks. A third flock also will allow managers to pull back on their extraordinary efforts to maintain birds in El Yunque. “We can start capturing wild breeding pairs from El Yunque and release them into these other newly established populations in better habitat,” White says.

With a third flock, wildlife managers might feel hope they finally can secure a future for one of the world’s rarest birds. “If Maricao is half as successful as Rio Abajo,” White says, “it will be a resounding success.”


Minnesota-based science, nature and travel writer Greg Breining is the author of more than a dozen books.