After the Marshall Spill: Pipelines in the Great Lakes Region 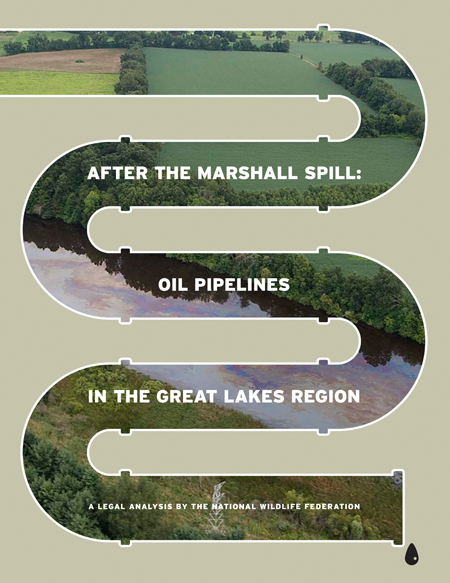 On July 25, 2010, Line 6B of Enbridge Energy Partners ruptured near Marshall, Michigan, causing one of the largest oil spills in Midwest history. The complex cleanup is still ongoing.

Approximately one million gallons of diluted bitumen, a heavy crude oil, spilled into a wetland that feeds Talmadge Creek, and from there into the Kalamazoo River. The spill affected wetlands, farmlands, residential areas, and businesses, raising health concerns and leading to evacuations and warnings about swimming, fishing, and drinking water. By August 5th, the spill had contaminated 30 miles of the Kalamazoo River but had stopped well short of Lake Michigan. The cause of the rupture is not yet known. In 2011, Enbridge estimated that the cleanup costs would be at least $725 million.

After the spill in Marshall, the pressing question is whether laws governing pipelines adequately protect the Great Lakes Basin from oil pollution. Unfortunately, federal laws are inadequate in several respects, and states have not passed their own laws to fill in the gaps.

At the federal level, there is no review of the long-term risks associated with routing of new pipelines or consideration of impacts to entire watersheds such as the Great Lakes Basin. The federal Pipeline and Hazardous Material Safety Administration's (PHMSA's) Integrity Management program--which requres pipeline operators to assess the condition of their existing lines, install leak detection systems, and repair defects on a set timeline--only applies to pipeline segments that could affect "high consequence areas," a subset of all environmentally sensitive areas.

Public involvement in federal pipeline regulation is limited, as is public access to information. Up until this year, the public had no right to access industry standards incorporated into the regulations without paying a fee. There is no opportunity for the public to comment on the safety of individual lines when they are constructed or during later operation except when an operator applies to obtain a waiver from general requirements. Moreover, the public does not have an opportunity to comment on operators’ spill response plans.

Within the Great Lakes region, only a few states have chosen to regulate the safety and environmental impacts of oil pipelines. Those requirements are minimal. Michigan, Minnesota, and Illinois require operators to obtain a routing permit for new oil pipeline; only Minnesota and Illinois consider a range of environmental factors in the decision to approve a route. While Indiana, Minnesota, and New York have certified programs to regulate intrastate hazardous liquid pipelines, the states have not imposed more stringent safety requirements on the design, operation, and maintenance of pipelines. No state in the region has its own spill response planning requirement, although Illinois, Indiana, and Minnesota require operators to report oil spills.

The report offers common-sense recommendations to improve the regulatory framework governing pipelines.  These include:

"Spills like the one in Marshall remind us that oil pipelines pose significant risks to the environment, including the natural resources of the Great Lakes Basin," said Sara Gosman, water resources attorney at the National Wildlife Federation and author of the report, along with University of Michigan Law students.  "Our report carefully analyzes pipeline laws and concludes that more can—and should—be done to protect these resources."

After The Marshall Spill: Pipelines in The Great Lakes Region

Nearly two years after one of the worst oil spills in Midwest history a new report asks the pressing question: “Do laws governing pipelines adequately protect the Great Lakes basin and its communities from oil pollution?”