Restoring the Gulf of Mexico for People and Wildlife 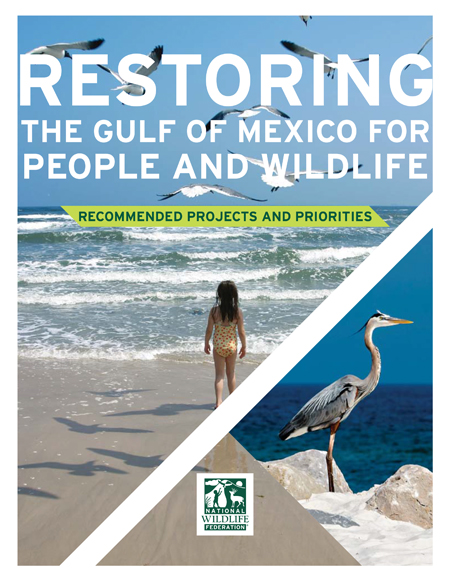 The National Wildlife Federation has a long history of advocacy in the Gulf of Mexico region. In 2000, our four million members and supporters were instrumental in securing Congressional support for the Comprehensive Everglades Restoration Plan. For more than a decade we have worked to ensure that Texas bays have the fresh water they need to support healthy fish and wildlife populations. And since well before Hurricane Katrina, we have championed the restoration of Louisiana’s disappearing coastal wetlands.

The 2010 Deepwater Horizon oil spill focused the world’s attention on the Gulf of Mexico, and in particular, on its natural resource value. In addition to causing the tragic deaths of 11 men, the 87-day disaster closed vast areas of the Gulf to fishing, killed and injured marine mammals, shorebirds, sea turtles, and other wildlife and damaged the Gulf’s delicate web of life in ways that are still unfolding. The spill also drew attention to the longstanding conservation and restoration needs of a Gulf ecosystem that supports much of the region’s economy but has been overworked and under-protected.

The National Wildlife Federation and our state affiliates, together representing millions of sportsmen and outdoor enthusiasts, actively supported the 2012 RESTORE Act, which sends 80 percent of the civil penalties arising from the 2010 oil spill back to the Gulf for restoration and recovery. With the passage of this groundbreaking legislation, Congress sent a message that the historic neglect of the Gulf Coast’s natural systems must be remedied.

Now, as the Gulf region recovers from the largest oil spill in U.S. history, state and federal leaders have an opportunity to invest in the long-term health and resiliency of its coastal lands and waters. The National Wildlife Federation believes that the highest return on this investment will come from efforts to restore and protect Gulf estuaries. These coastal waters are among the most productive natural habitats in the world. Estuaries serve as spawning, nursery, and feeding grounds for nearly all of the Gulf’s commercial and recreational 􀂿sh species and provide essential habitat for hundreds of species of birds, waterfowl, and other wildlife.

Despite their ecological and economic importance, most of the Gulf’s estuaries have been adversely affected over the years by human alterations to land and water upstream. This is true of the marshes of coastal Louisiana, Apalachicola Bay and adjacent sea grass beds, the Mobile Bay estuary, Charlotte Harbor and Florida Bay in southwest Florida, the Mississippi Sound and the estuaries along the Texas coast.

The National Wildlife Federation has compiled the following recommended state-by-state list of projects to begin a robust investment by the Council in the health and productivity of Gulf estuaries. These waters are the lifeblood of communities and businesses across the Gulf.

Their protection and restoration are key to both the near-term recovery and the long-term resiliency of the national treasure that is the Gulf of Mexico.

Restoring the Gulf of Mexico for People and Wildlife