Tar Sands at Our Doorstep 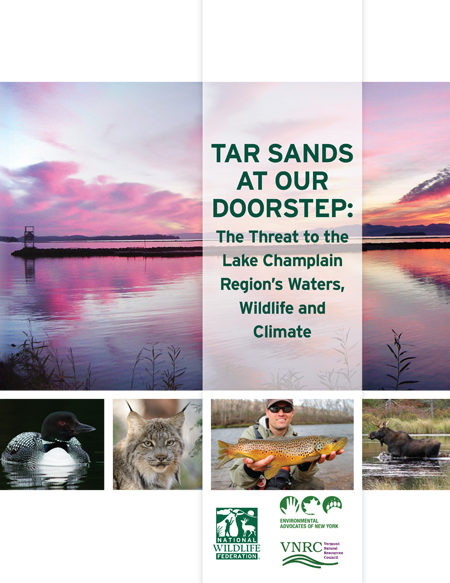 A major battle is unfolding across New England, New York, and beyond. The fight is whether our region, with a long history of successfully reducing pollution, protecting wildlife, improving public health, and growing our economy with clean energy technologies, will become a large user and major transportation corridor of one of the dirtiest fossil fuels on Earth—tar sands oil from Alberta, Canada. The outcome of this fight will have dramatic implications on wildlife and communities, from potential toxic oil spills in our lakes and rivers to substantial increases in greenhouse gas pollution fueling climate change.

Tar Sands at Our Doorstep documents the tar sands oil industry’s three pronged attack to infiltrate the region with dirty, dangerous tar sands oil. The report highlights the impacts on one of the region’s most important natural resources, Lake Champlain, an international treasure often referred as the sixth Great Lake, and other critical habitats across the state of Vermont.

The oil industry is making moves to bring tar sands to the Northeast in three ways:

With avenues like Keystone XL stalled and likely to be denied, the industry is getting desperate to move its carbon polluting, land-locked tar sands oil to markets—particularly abroad—and make good on plans to greatly expand tar sands oil production in the coming years. This report, for the first time in one place, shows the Exxon-owned Portland Pipe Line Corporation’s true intentions to transport tar sands oil through the region.

The report makes critical recommendations to ensure that the region’s residents and policy makers are alerted to the serious risks posed by dirty tar sands oil. In particular, the report recommends:

Tar Sands at Our Doorstep

The Threat to the Lake Champlain Region's Waters, Wildlife, and Climate