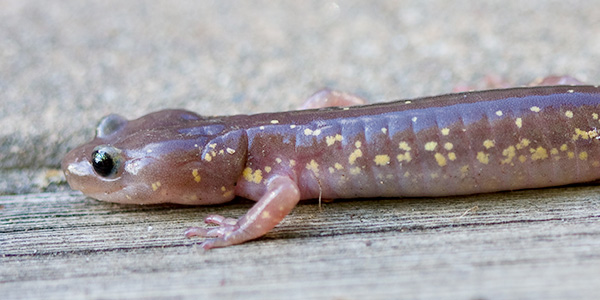 As their name implies, arboreal salamanders are excellent tree climbers. The amphibian’s large toes and prehensile tail aid it in climbing up to 60 feet above the ground. They have large, triangular heads and thick bodies, which can reach seven inches (18 centimeters) in length, including the tail. The arboreal salamander’s back is dark brown or gray, usually with yellow or white spots, and its underside has a cream coloration.

Arboreal salamanders live in the United States along the coast of California, from Humboldt County to the northern part of the Baja Peninsula. An inland population occurs in the Sierra Nevada foothills. They live in coastal oak woodlands and yellow pine and black oak forests. Arboreal salamanders have no lungs, so they breathe through their skin and membranes in their mouths and throats. For this reason, they are restricted to areas with plenty of moisture. Much of their time is spent under leaf litter on the forest floor, but they retreat to tree cavities in the summer to wait out the dry weather. Snakes and birds are common predators.

These amphibians use several defense mechanisms to avoid becoming dinner for jays and Pacific rattlesnakes. When disturbed, they exhibit a defensive stance, squeak, jump, and attempt to flee. If necessary, they use their teeth to inflict a wound on their attacker. While their bite is too small to do significant damage on large animals, the open gash can become infected and prove fatal.

Arboreal salamanders breed in late spring to early summer. A female lays about 12 to 24 eggs at a time, usually in a moist log or tree cavity. The female broods the eggs, which hatch within three to four months. Unlike some other amphibians, these salamanders don’t undergo a larval stage. Newly hatched arboreal salamanders look just like miniature adults. On average, an arboreal salamander lives about five years.

1. Arboreal salamanders belong to the family Plethodontidae, meaning “many teeth.”

2. In the dry season, somearboreal salamanders retreat to rodent burrows to stay moist.

3. When space and moisture is limited, arboreal salamanders come together in groups of a dozenor more.