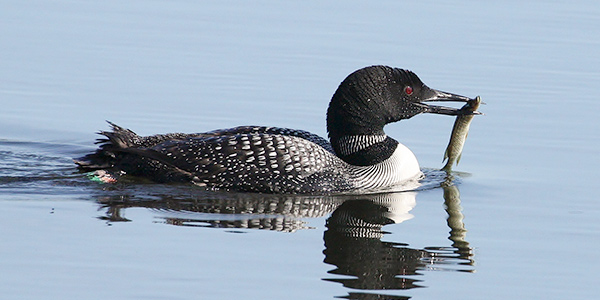 Common loons, with their eerie calls, are icons of northern lakes. These long-bodied birds are impressive swimmers and divers. Unlike the majority of bird species, common loons have solid bones, which makes them less buoyant and more effective at maneuvering through water. Their legs are set far back on their bodies, which also helps them maneuver through water, but causes them to move awkwardly on land. The common loon spends little time on land though, typically only going ashore to nest.

The loon can stay underwater for up to five minutes, its signature red eyes helping it locate prey while submerged. Common loons are skilled in flight, sometimes reaching speeds of 70 miles (110 kilometers) an hour. Because of their relatively heavy bodies, they need a long "runway" to take off for flight and can only do so from water. Their legs trail out behind them while in flight, a characteristic held by all loons.

During the summer breeding months, adults have a black rounded head, pointed black bill, black-and-white barred neck, white breast, and a black-and-white checkered back. From September to March, however, their throat is white and the rest of their body is gray. Common loons reach a size of 28 to 32 inches (71 to 81 centimeters) in length with a wingspan of about 46 inches (117 centimeters). They can weigh between 9 and 12 pounds (4 and 5.5 kilograms). Males are generally larger than females.

Common loons breed on lakes surrounded by forests in Canada and the northern United States, including Alaska. In the winter they migrate from northern lakes to coastal ocean waters.

Adult loons are rarely prey for other species, with the possible exception of sea otters and large raptors such as bald eagles and ospreys. However, their eggs and chicks are eaten by raccoons, ravens, bald eagles, minks, gulls, crows, snapping turtles, skunks, foxes, northern pike, and muskies.

The common loon feeds primarily on fish. Common loons will often consume their prey underwater, instead of bringing it to the surface to eat. They will also eat a variety of other aquatic animals, such as crayfish and shrimp, as well as vegetation.

Common loons are thought to be monogamous, having the same partner for life. Male and female common loons will prepare a nest of grasses and reeds together in a sheltered location along a lakeshore, or on an island near deep water where they can swim to and from the nest without alerting predators. They incubate one to two eggs for 26 to 30 days. Within hours of hatching, chicks are able to swim and ride on their parents’ backs. The nesting pair will often return to an existing nest the next year. Loons begin breeding at about six years old and are thought to be long-lived birds, living up to 30 years.

North American common loon populations are stable overall. They depend on clean water in lakes and other bodies of water, and are sensitive to the effects of pollution and human disturbances. They have special conservation status in some states, such as Michigan, where they are listed as threatened.

Common loons have four different calls, each used for a different purpose.