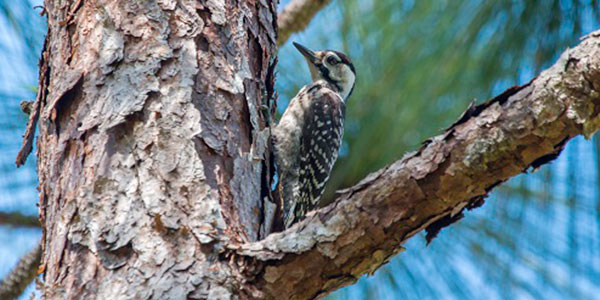 Red-cockaded woodpeckers are named for the line of red feathers sported by males between their black caps and white cheeks. When the birds were given a name about two centuries ago, cockades—ribbons or ornaments worn in hats—were quite popular, and the decorative feathers on the male were reminiscent of one. The red cockade is one of the only features that distinguishes a male from a female. Both males and females have grayish-white bellies and black-and-white striped backs. Red-cockaded woodpeckers are 7.8 to 9.1 inches (20 to 23 centimeters) in length with a 14-inch (36-centimeter) wingspan.

Red-cockaded woodpeckers have been extirpated from the northern part of their range. They are now found in a patchy distribution from Virginia south to Florida and west to Arkansas, Oklahoma, and Texas.

The woodpeckers live in mature pine forests that are maintained by fire. Mature trees are preferred over young ones for two reasons. First, young trees may not be large enough in diameter for cavity excavation. Second, mature trees are more likely to be infected with a fungus called red heart disease. This makes the wood of the tree softer and easier for the woodpecker to remove. Fire is important because it keeps the forest midstory from getting too tall. It’s thought that when the midstory rises too high, predators and nest competitors have easier access to woodpecker cavities. Red-cockaded woodpeckers drill sap wells near the entrance to their nests to deter rat snakes, a major tree-climbing predator. The woodpeckers must also watch out for several other bird and mammal species that seize their nest cavities while they’re still in use.

Most of the red-cockaded woodpecker's diet is comprised of insects and spiders foraged from under loose pine bark. They supplement their insectivorous diet with seeds and berries.

Red-cockaded woodpeckers are cooperative breeders, meaning multiple birds take care of the young. Females lay their eggs in the roost cavities of their male mates. The male and several helper birds, which are usually relatives of the breeding pair, incubate the eggs. The whole family sticks together while the young are raised. Red-cockaded woodpeckers have been recorded living up to 12 years, but the average lifespan is lower.

Red-cockaded woodpeckers now occupy a much smaller portion of their original range, and they are federally listed as endangered. Red-cockaded woodpeckers have a preference for longleaf pine forests, but these have been extensively logged and replaced with other pine species. The woodpeckers will nest in shortleaf, slash, and loblolly pines, but it takes the young, replanted trees years to mature to the level at which they become habitable for the woodpeckers. Additionally, natural, beneficial fires have been suppressed in the forests, which results in more habitat for predators of the woodpeckers.

When red-cockaded woodpeckers begin excavating a nest cavity, they remove wood at an upward angle so sap drains out and rainwater doesn’t flood the hollow. Once they drill past the outer sapwood, the nest cavity starts to take shape in the heartwood.