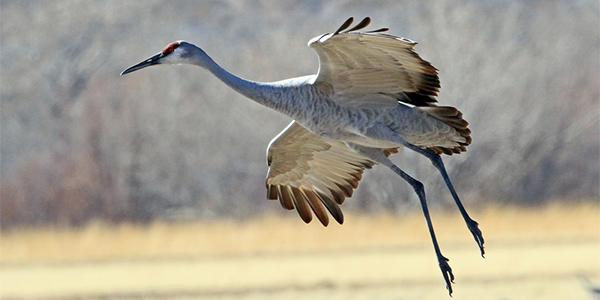 Sandhill cranes are large birds with long, thin legs and necks. The bird's cheeks are white and its forehead has a bright red patch, which is one of the bird's most noticeable features. Sandhill cranes have mostly grayish feathers, but the shade of gray can vary widely. Although the feathers are gray, sometimes they can have a reddish-brown appearance. This is because sandhill cranes preen themselves by rubbing mud on their feathers and mud from iron-rich environments is often red. Sandhill cranes are about three to four feet (0.9 to 1.2 meters) tall with a wingspan that can be more than five feet (1.5 meters).

Sandhill cranes are opportunistic feeders. They will change their diet based on what's available. They most often eat plants and grains, but also dine on invertebrates or even small mammals, amphibians, and reptiles.

Sandhill cranes mate for life. When they form a pair bond, it can last for years, until one of the cranes dies. After a mate passes away, the surviving crane will seek out a new mate.

In the early spring, as sandhill cranes are migrating to their breeding grounds, single cranes will start pairing up. The loudest and most noticeable call made by a sandhill crane is during the mating season. Males and females will perform unison calling to create a bond.

During mating, sandhill cranes perform dancing displays. Although the dancing is most common in the breeding season, the cranes can dance all year long. Sometimes the dance involves wing-flapping, bowing, and jumping. They might also throw a stick or some plants into the air.

When the pair reaches the northern breeding grounds, they mate and build a nest. Cranes build a ground nest out of plant materials. They often have two eggs. The pair will take care of the nest together with the male standing guard.

It takes about a month for the eggs to hatch and over two months for the chicks to be independent. In the fall, the juvenile sandhill cranes migrate south with their parents. After two years, the juvenile cranes reach sexual maturity and begin the search to find their own mates. Sandhill cranes in the wild have a greater chance of dying young, but these cranes can live for 20 years or more.

Sandhill cranes have an interesting and distinctive call. Both the males and females make a rattling "kar-r-r-r- o-o-o" sound.