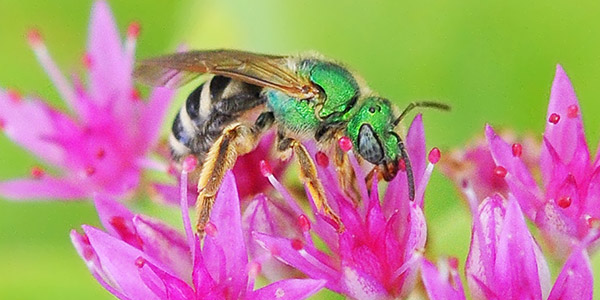 Like all insects, a bee’s body is divided into three parts: a head with two antennae, a thorax with six legs, and an abdomen. All bees have branched hairs somewhere on their bodies and two pairs of wings. Only female bees have stingers (which are modified ovipositors, organs originally used to lay eggs). Many bee species have black and yellow coloration, but many do not—they actually come in a variety of colors, including green, blue, red, or black. Some are striped, and some even have a metallic sheen. They range in size from large carpenter bees and bumble bees to the tiny Perdita minima bee, which is less than two millimeters long.

There are over 20,000 bee species worldwide, including the honey bee, which originated in Eurasia and has been imported around the globe as a domesticated species. Wild bees species live on every continent except Antarctica. In North America there are approximately 4,000 native bee species occupying ecosystems from forests to deserts to grasslands.

Bees feed exclusively on sugary nectar and protein-rich pollen from flowering plants, unlike the carnivorous wasps from which they evolved.

As they forage, bees perform the critical act of pollination. As a bee enters a flower to feed on nectar and gather pollen, some of the pollen sticks to the bee’s body. When the bee flies on, it deposits some of that pollen on the next flower it visits, resulting in fertilization, allowing the plant to reproduce and to generate the fruits and seeds so many other wildlife species rely on as a food source. In fact, bees pollinate a staggering 80 percent of all flowering plants, including approximately 75 percent of the fruits, nuts, and vegetables grown in the United States.

Though all female bees can sting, they only do so when threatened. Honey bees, with hives filled with honey and larvae that need protecting, are generally more aggressive and likely to sting when disturbed than solitary native bees.

Bees begin life as eggs, which hatch into larvae the feed and pupate and eventually emerge in their adult form, where they visit flowers to feed on and gather nectar and pollen.

Unlike the hive-forming domesticated honey bee or wild bumble bee species, most bees are solitary nesters. They don’t form hives, create honey, or live a communal lifestyle. Instead, they lay their eggs in a series of tiny chambers in tunnels in the ground, in hollow plant stems, or in decaying wood. Unlike hive-forming bee species, which collectively care for their young, female solitary bees provision their eggs with a ball of nectar and pollen and leave them to grow and pupate on their own with no parental care.

However, some species do not build nests at all. These “cuckoo bees" will lay their eggs in nests built by other species. Cuckoo bees will sometimes kill the host species’ larvae to ensure their own eggs will have enough food to grow to adulthood.

Queen bumble bees can live for a year and workers for a month. Solitary bees also live for about a year, with the majority of that time spent developing in their nesting chamber where they hatch, pupate, and often overwinter. Their adult lives, during which they are active, lasts approximately three to eight weeks. Females tend to live a bit longer, as they need to build a nest and lay eggs.

Both domesticated honey bees and many native bee species are in decline. In fact some species, such as the once-common rusty patched bumblebee, are now listed as endangered in the U.S. Potential causes of these declines include habitat destruction, disease, agricultural and lawn and garden practices, use of pesticides, habitat fragmentation, changes in land use, invasive species, and climate change.

Pollinators, notably native bees, are critical to the survival of North America’s native plants, other wildlife, and people alike. The National Wildlife Federation maintains and supports several initiatives that support pollinators. Learn more about our work through Garden for Wildlife.

Some species of bee employ a technique called sonication, or buzz pollination, when they harvest pollen. During sonication, the bee rapidly vibrates its flight muscles while attached to the flower. This loosens the pollen, which makes it easier to collect.