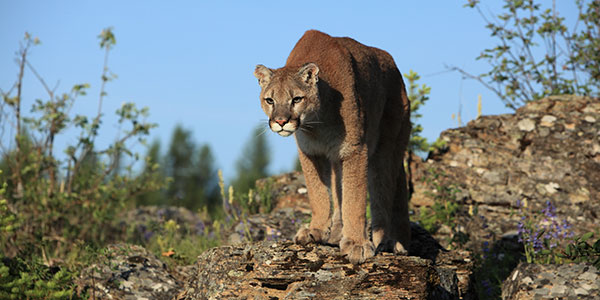 The mountain lion—also known as the cougar, puma, panther, or catamount—is a large cat species native to the Americas. Mountain lions are large, tan cats. Their bodies are mainly covered in tawny-beige fur, except for the whitish-gray belly and chest. Black markings decorate the tip of the tail, ears, and around the snout. Mountain lions vary hugely in average body size depending on geographic location—their size is smallest closer to the equator and largest closer to the poles. Generally, though, males weigh between 115 and 220 pounds (52 and 100 kilograms) and females weigh between 64 and 141 pounds (29 and 64 kilograms).

The mountain lion’s range spreads all across the Americas, from the Canadian Yukon to The Strait of Magellan, the greatest of range of any living mammal in the Americas. Mountain lions inhabit a wide range of ecosystems, making their home anywhere there is shelter and prey, including mountains, forests, deserts, and wetlands. They are territorial and have naturally low population densities, which means the species requires large swaths of wilderness habitat to thrive.

Mountain lions are stealthy predators, hunting at night and often lying in wait for prey or silently stalking it before pouncing from behind and delivering a lethal bite to the spinal cord. Typically they prey on deer, but also feed on smaller animals, even insects, when necessary. Like all cats, mountain lions are strict carnivores, and they only rarely consume vegetation.

Mountain lions can breed year-round. Female mountain lions usually give birth every two years. Litters can range in size from one to six cubs. The young may stay with their mother for as long as 26 months, but usually separate after about 15 months. In the wild, a mountain lion can live up to 10 years. In captivity, they can live up to 21 years.

The historic range of the mountain lion included almost all of North and South America. The species was so wide-reaching and populous that it had multiple subspecies that varied based on location. Throughout the 1800s and early 1900s, people feared the mountain lion because it posed a risk to their livestock. The species was maliciously hunted and almost eradicated from the eastern United States. Due to conservation efforts, mountain lion populations in the western United States are stable, although far lower than they were historically. While there are still several thousand mountain lions in the wild, their population has significantly decreased from their historical population due to unsustainable hunting, habitat destruction, and conflicts with livestock.

The eastern cougar, a subspecies of mountain lion, was declared officially extinct by the U.S. Fish & Wildlife Service in 2011, although individuals from western populations have been confirmed to wander as far as the East Coast. Florida panthers, the other U.S. subspecies of mountain lion, are listed as critically endangered on the endangered species list. There are less than 160 Florida panthers left in the wild.

Learn more about our work through our Save LA Cougars campaign.

Unlike other large cats, they cannot roar. Instead they growl, shriek, hiss and purr, similar to house cats. Mountain lions are territorial and solitary. They use pheromones and physical signs (like claw markings or feces) to define their territory.