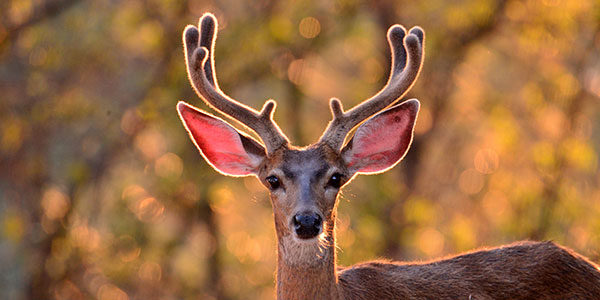 Mule deer’s defining characteristic are their large ears, which are about three-fourths the length of the head. They have a distinctive black forehead, or mask, that contrasts with a light gray face. In the summer, mule deer are tannish-brown and in the winter are brownish-gray in color. They have a white rump patch and a small white tail with a black tip. When running, they bound in a motion called “stotting,” in which all four hooves push off the ground at the same time.

Black-tailed deer are a subspecies of mule deer found in the Northwest and, as their name suggests, have black tails instead of white. White-tailed deer are a different species but overlap in range with the mule deer in some places. Mule deer are slightly larger, have bigger ears, smaller tails, and have a forked antler structure rather than having points that grow from a central branch. The easiest way to differentiate the species is to look at the tail. Only the underside of the white-tailed deer’s tail is white, while the mule deer’s tail is all-white with a black tip and is much smaller. In addition, mule deer do not flash their tails in alarm.

Mule deer are among the most beloved and iconic wildlife of the American West. These deer are found west of the Missouri River, especially in the Rocky Mountain region of North America. Mule deer are adapted to arid, rocky environments. They thrive in habitats that have a combination of early-stage plant growth, mixed-species plant communities, and diverse and extensive shrub growth. A mixture of plant communities provides better forage than any single species. Plants that are young and emerging are more nutritious than mature trees and shrubs.

Mule deer are browsers, feeding on herbaceous plants and the leaves and twigs of woody shrubs. Mule deer are selective feeders. Instead of eating large quantities of low-quality feed like grass, they must select the most nutritious plants and parts of plants. Because of this, mule deer have more specific forage requirements than cattle or elk that share their habitat.

Between November and February (depending on the locality), bucks that are evenly matched in size and strength engage in battles for the right to mate with females. They lock antlers and fight until the point of exhaustion, when one will back down and flee from the victor. These victorious bucks attract females to them and attempt to defend them against the attention of other (often younger) bucks. Sexual maturity is attained at the age of about 18 months in does, but young bucks are not allowed to participate in the rut until they are three to four years old.

The gestation period is approximately 200 to 210 days, and the fawning period extends over several weeks in the summer. The female sequesters herself and drops her fawn in a protected spot, where it remains for a period of a week or 10 days before it is strong enough to follow her. At birth, fawns are spotted and weigh approximately 5.5 pounds (2.5 kilograms). The young ones are weaned at about the age of 60 or 75 days, at which time they begin to lose their spots. Mule deer usually live 9 to 11 years in the wild.

Now declining deer populations have people wondering if the factory is running down. Mule deer populations have been dropping across the West for several years. State wildlife managers and wildlife groups are trying to determine what’s behind the declines in western Colorado. The renowned White River herd in northwest Colorado has plummeted from more than 100,000 in the early 1980s to the current estimate of 32,000 deer. The National Wildlife Federation's work includes a fact sheet, “Legacy in the Crosshairs: Colorado’s ‘Mule-Deer Factory’ on the Decline” that homes in on shrinking habitat due to development, including increased oil and gas drilling, and a growing human population as likely contributors to the decreases.

Mule deer get their name from their big, mule-like ears.

The Mammals of Texas