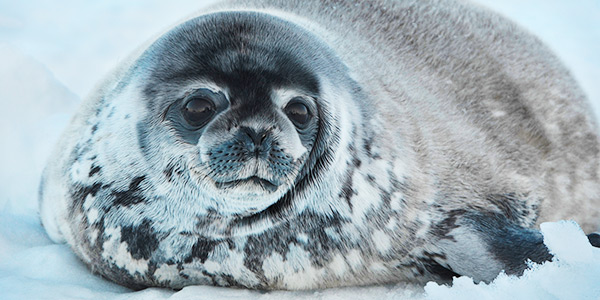 The ringed seal, which gets its name from the pattern of small, light circles on its back, is the smallest of the pinniped species. Ringed seals are gray or brown in color with small heads, short snouts, and small front flippers with strong claws. Ringed seals vary greatly in size, reaching anywhere from 3.6 to 5.7 feet (1.1 to 1.7 meters) and weighing between 70 and 270 pounds (30 and 120 kilograms).

Ringed seals live in the Arctic seas and the North Pacific Ocean, as far south as Japan. They are mainly found in or around ice-covered areas. Sea ice is important to ringed seals, as it provides protection from some of its predators. However, polar bears—a predator of ringed seals—spend a lot of time on sea ice hunting these seals.

A ringed seal will eat what's available to it, including fish, crustaceans, and cephalopods. Younger seals tend to eat more crustaceans than adults. During their spring molt, ringed seals reduce their food intake.

Most ringed seals give birth in lairs on ice floes. Pups are born with a white coat, also called a lanugo, which they shed after about three weeks. Adult ringed seals molt from mid-May to mid-July, after each breeding season.

Ringed seals are also threatened by reduced snowfall. Their pups are born and spend the first few weeks of life in snow dens, which protect them from predators and freezing. Diminishing snowfall, earlier snow melt, and winter rains are pushing more pups out of their shelters before they are able to survive in the open. An additional challenge is that ringed seals have only one pup per year, making them especially vulnerable to environmental changes.

In December 2012, the National Oceanic and Atmospheric Administration announced that the ringed seal, as well as the bearded seal, would be listed as a threatened species under the Endangered Species Act because of the risks posed by melting sea ice and reduced snowfall.

A young ringed seal doubles its weight within two months of birth.