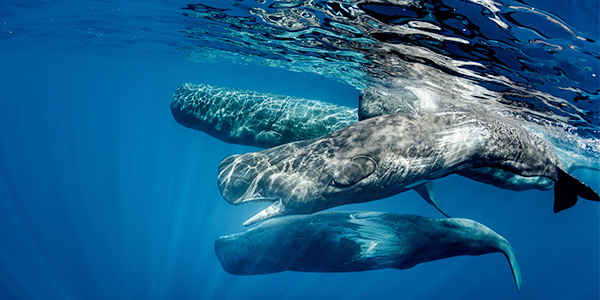 The sperm whale, also called a cachalot, made its biggest public splash in the guise of Moby Dick. The whale is generally gray with wrinkled, prune-like skin covering a torpedo-shaped body. The blunt head of the sperm whale accounts for a third of its body length, and much of it is filled with a waxy, oily substance called spermaceti that lies above and in front of the skull. This substance once was used for fine lubrication and for fueling lamps.

Whales are mammals, which means the sperm whale has lungs and breathes air. It inhales and exhales through a blowhole located toward the front of the head. The exhalation is misty with condensed moisture, usually projected forward, and is characteristically bushy shaped.

The tail, which is plainly visible when the animal goes down headfirst for a deep dive, is triangular. Each sperm whale bears 20 to 26 banana-shaped teeth on its lower jaw, which fit into sockets in the upper jaw. Upper teeth are rudimentary and may not show, but lower teeth may each weigh as much as two pounds (32 ounces). A large male may grow to more than 60 feet (18 meters), females up to about 40 feet (12 meters). The sperm whale is the largest of all toothed-whale species. Its closest rival in size among toothed whales is Baird's beaked whale, which grows to about 40 feet long.

The sperm whale occurs throughout the world's oceans and in the Mediterranean Sea. Prior to whaling, sperm whales may have numbered 1.1 million worldwide, according to the American Cetacean Society. Today the number is perhaps 300,000. The sperm whale prefers ice-free waters at least 3,300 feet (1,000 meters) deep. When hunting squid, a whale may dive in excess of 6,500 feet (2,000 meters)—more than a mile—and can stay underwater for more than an hour.

Much of the sperm whale's life is spent under the sea far from land, so the species largely remains a mystery. Individuals are born into groups composed of about a dozen females and their young.

Like elephants, females tend to stay together, but males leave the group as early as their fifth year. Young males form groups with others about their age. As they mature, the males break into smaller groups; older males usually live alone. The bulls tend to stay in cooler, higher latitudes, while females remain in warmer waters. Males are ready to breed at 18 years old but don't reach full size until about 50. They return to female ranges to mate.

Females are sexually mature at 7 to 13 years old and produce young at intervals of every three to six years with gestation lasting 14 to 16 months, usually resulting in a single offspring. Females will cooperate in defending young from dangers such as orcas and also will suckle one another's young. Their typical lifespan is 70 years, but some may live longer.

The sperm whale is federally listed as endangered under the Endangered Species Act. The animal is safeguarded in U.S. waters by the Marine Mammal Protection Act and worldwide by international whaling agreements. Because few are killed by hunters yearly, future prospects for this species are promising.

The sperm whale was hunted for centuries for oil taken from reservoirs in its massive head and rendered from its blubber. The species was especially beleaguered by whalers from the end of World War II until 1985, when the International Whaling Commission created a treaty among its members that virtually stopped sperm whale hunting. The species is still recovering, though its numbers are likely increasing. Nonetheless, whaling—which targeted large males—so severely affected the species that males today are rarely more than 60 feet long (historic records suggest they once may have exceeded 70 feet).

A small population of fewer than 1,500 sperm whales lives in the Gulf of Mexico; the species was much more numerous there before whaling put a dent in its numbers. Studies have found that gulf whales are a distinct population—they use combinations of calls different from those of other sperm whale populations and are smaller in size, probably an adaptive response to the limitations of their habitat and its food sources. For years now, biologists have feared that oil development in the gulf could harm sperm whales. During the past decade, oil companies have been drilling in increasingly deeper waters. The Gulf of Mexico is studded with 4,000 offshore oil platforms and holds 25,000 miles of active petroleum pipeline; the platforms and various exploratory activities are focused on the Mississippi Canyon and continental-shelf edge favored by sperm whales. Studies have suggested that loud sounds used by the oil industry to detect oil deposits under the gulf floor may interfere with the whales' use of sonar to locate prey.

Oil spills, such as the 2010 Deepwater Horizon oil spill, pose several threats to sperm whales and to other whale species in the gulf, as well as to dolphins. Oil floating at the surface can emit toxic fumes that surfacing whales and dolphins will breathe. Oil can coat baleen—comb-like growths in the mouths of toothless whales used for filtering prey out of ingested water—and make it ineffective for capturing prey. For sperm whales, which are not filter feeders, the biggest threat from an oil disaster and from the toxic chemical dispersants used to break up the oil, is the harm that may be done to prey species deep underwater. Even if not killed outright, prey animals are likely to absorb the toxins and pass them on to the whales. This factor could impair reproduction in both whales and their prey.

Sperm whales are capable of producing clicking sounds that are roughly equivalent in volume to a rifle shot and rank among the loudest animal sounds. Such sounds may be used as a form of sonar to locate prey. The large head and its oily filling apparently help the animal to direct or aim its clicks. Some divers have reported feeling pulsations, probably from sound, emanating from nearby sperm whales.