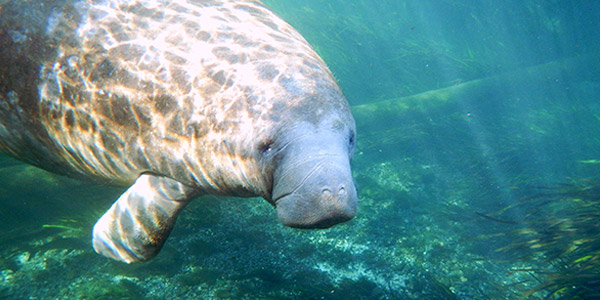 Sometimes known as “sea cow” because it forages on aquatic plants, the West Indian manatee is one of four living species of the aquatic mammal order Sirenia. There are two subspecies of West Indian manatee—the Florida manatee (Trichechus manatus latirostris) and the Antillean manatee (Trichechus manatus manatus). The two share many traits in common. They are most often gray in color but can range from black to light brown. Their wrinkled skin is covered sparsely with hairs and is sometimes spotted with algae or even barnacles. They have large, heavy, seal-shaped bodies with paired flippers, and a round, paddle-shaped tail. Their faces are wrinkled and bear whiskers. Their upper lip is flexible and split and used to pass food into the mouth.

At birth, calves are between three and four feet (0.9 and 1.2 meters) long and weigh anywhere between 40 and 60 pounds (18 and 27 kilograms). Once they reach adulthood, manatees average 10 feet (three meters) in length and weigh between 800 to 1,200 pounds (360 to 540 kilograms). Despite the manatee's large size, they are very agile in the water. They spend most of their time underwater, but return to the surface to breathe, often remaining just below the surface with only their snout peaking out above the water. They can remain underwater for as long as 12 minutes, but the average is 4.5 minutes.

Florida manatees are found primarily along the coast of Florida, the Gulf Coast, and the Caribbean. They migrate between winter grounds in the Caribbean and Florida and summer grounds that can be as far north as North Carolina and as far west as Texas, although they have been spotted as far north as Rhode Island. They have little tolerance for cold water because of their low metabolism and lack of insulating body fat. Antillean manatees are found in the Caribbean, in the Gulf and Caribbean coasts of Central America, and in northern and eastern South America.

Manatees eat aquatic plants such as cordgrass, turtle grass, and eelgrass, and even non-native water hyacinth and hydrilla. They consume anywhere from 4 to 9 percent of their body weight each day, which averages to about 32 pounds of plants a day. They spend about five to eight hours eating each day. They can use their flippers to dig up plants and use their upper lip to manipulate leaves of plants for feeding. They also occasionally eat invertebrates and fish.

With no breeding season, manatees can mate at any time of the year. Females reach sexual maturity between 3 and 10 years of age and will give birth to one or two calves every two to five years. The calves nurse underwater from a nipple behind the mother’s forelimb. They can start eating plants right away, but will continue to stay with their mothers and nurse for up to two years. West Indian manatees communicate with touch and with vocalizations that sound like squeals and squeaks. Mother and calf recognize each other through these vocalizations, which help them to remain in contact. The average lifespan is 30 years in the wild.

Manatees are considered threatened on the endangered species list, and their survival is seen as limited due to their low reproductive rates. Manatees were historically hunted, but now are protected under the Marine Mammal Protection Act, which prohibits the take of all marine mammals. Today the biggest threats to manatee survival are collisions with boats and loss of warm water springs that provide important habitat, but they are also vulnerable to entanglement in fishing gear, red tide blooms, and loss of seagrass beds they feed upon due to pollutants.

Sailors once mistook manatees for mermaids. The scientific name for the zoological order manatees belong to, Sirenia, comes from the word “siren,” a sea creature from Greek mythology whose beautiful songs lured sailors to shipwreck.