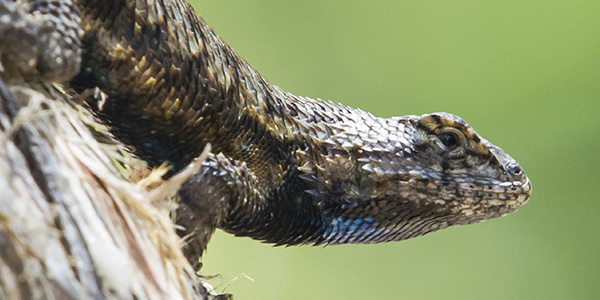 Fence lizards are spiny lizards, meaning they have rough, pointed scales on their backs. Their bodies are gray to brown in color, but males and females can be distinguished by certain color variations. Females have patterns of black horizontal stripes on their backs, while males have patches of bright blue scales on their bellies and throats. Adults usually reach 4 to 7.5 inches (10 to 19 centimeters) in length.

Eastern fence lizards are found from New York south to northern Florida and as far west as Ohio and Arkansas. Fence lizards live in a number of habitats—including woodlands, grasslands, and shrublands—but they usually stick to areas with trees. They spend most of their days basking on fence posts, trees, stumps, and rocks, and they crawl into rock crevices or go underground at night. Males ward off other males from their territories with displays of head-bobbing and push-ups.

Snakes, birds, cats, and other reptiles are predators of fence lizards. The fence lizard makes its escape by running up tree trunks and pausing on the opposite side to avoid being seen. If its pursuer circles around, the fence lizard will continue to spiral up the tree trunk until it ascends out of reach.

Fence lizards usually forage twice a day. Prey includes a number of invertebrates such as beetles, ants, moths, grasshoppers, spiders, and stink bugs. Females may eat more insects during the spring in an effort to save energy for laying her eggs.

To claim territory, male fence lizards will flash the blue scales on their underbelly. They have also been observed doing push-ups and head-bobs to deter other males from infiltrating their territories. This behavior is correlated with the availability of food in the area.

Male and female fence lizards mate from April to August, then quickly go their separate ways. Young females lay only one clutch of eggs per year, but older females can produce up to four clutches. The eggs are deposited underneath the soil and hatch after 10 weeks. The offspring receive no parental care, so juvenile mortality is high. The average lifespan of eastern fence lizards is unknown, but is probably less than five years.

Fence lizards are relatively common and their populations are stable. Currently they face only minor threats. Flooding can have a negative effect on hatchling populations.

Fence lizards are so fond of pine trees that they’ve also gotten the name “pine lizard.”