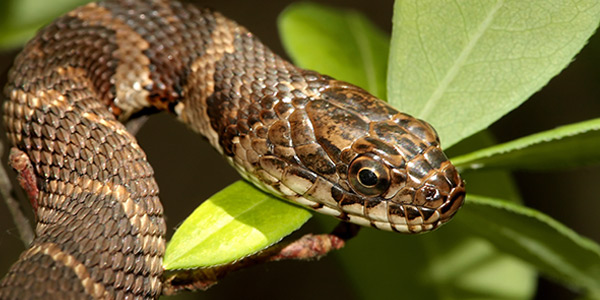 Northern water snakes are some of the most common water snakes in the United States. The reptiles’ bodies can be varying shades of gray, tan, buff, or brown, and the juvenile snakes are often more brightly colored than the adults. As adults, they have dark bands and are often mistaken for copperheads or cottonmouths, but these snakes are not venomous. However, when agitated they may flatten their bodies and bite. Fully grown water snakes are between 2 and 4.5 feet (0.6 and 1.4 meters) long, with most measuring about 3.5 feet (one meter) long.

These snakes can be found throughout the eastern half of the United States, especially in the Northeast and Midwest. Northern water snakes like a wide variety of aquatic habitats. They can be seen basking on rocks and prefer slow-moving or standing water near places where they can bask in the sun, such as ponds, vernal pools (seasonal pools of water), and lakes.

The northern water snake feeds heavily on fish and amphibians, swallowing its prey alive. These snakes have been known to eat a number of fish species, such as brook trout, sunfish, smallmouth bass, minnows, bullhead catfish, and hogsuckers. They have also been recorded eating northern cricket frogs, toads, southern leopard frogs, bullfrog tadpoles, and spring peepers.

These snakes are only social during fall and spring. They have been observed coiled together, basking in the sun. In the warmer months, they are solitary creatures found on overhanging branches, walkways, and cattail stems.

Northern water snakes mate after coming out of hibernation in late March to April. Females give birth between late August and early October to live young, having anywhere between 12 and 36 at a time. Their lifespan is nine years in captivity, but is unknown in the wild.

This species is stable, but it does face habitat loss. Additionally, northern water snakes are occasionally killed because they are mistaken for “water moccasins”—another name for the venomous cottonmouth.

An individual northern water snake may look different in water than on land. As its scales dry, the colors appear more uniform and it can be harder to see the snake’s bands of color.