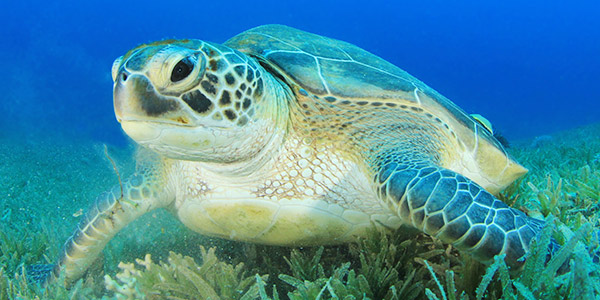 A green sea turtle is most easily recognized by its top shell. The shell covers most of the animal’s body, except for its flippers and head. Despite its name, a green sea turtle's shell is not always green. The smooth, heart-shaped shell can be a blend of different colors, including, brown, olive, gray, or black. The underside is a yellowish-white color. The green sea turtle’s head has brown and yellow markings.

Green sea turtles have paddle-like limbs called flippers that allow the turtle to move quickly and easily through the water. These dense, heavy animals can reach three to four feet in length and weigh upward of 300 to 350 pounds (136 to 159 kilograms). Despite their size, they are still not the world's largest sea turtles—that title belongs to the leatherback sea turtle.

Green sea turtles are found around the world in warm subtropical and tropical ocean waters, and nesting occurs in over 80 countries. There are populations with different colorings and markings in the Atlantic, Indian, and Pacific Oceans. Though not well understood, these turtles are highly migratory and undertake complex movements and migrations.

Once a green sea turtle hatches and heads into the ocean, it rarely returns to land. Instead it feeds on offshore plant blooms around islands and beaches. Green sea turtles stay in shallow waters until the breeding season. Every time the females breed, they make a long migration back to their natal beach, or the beach where they were born. They will travel long distances, even across oceans, to return to their preferred breeding site.

In the United States, green sea turtles are most often seen on the Hawaiian Islands, Puerto Rico, the Virgin Islands, and the east coast of Florida. Less frequent nesting also occurs on the Atlantic coast in Georgia, South Carolina, and North Carolina.

The breeding season occurs in late spring and early summer. The males arrive in offshore waters first and wait for the females to come to the beaches. Adult males can breed every year, but females only breed every three to four years.

A few weeks after mating, a female green sea turtle arrives on the beach and digs a hole in the sand for her eggs. Inside the hole, she lays 75 to 200 eggs and covers the hole with sand. At this point, her role is complete, and she leaves her eggs to fend for themselves. A female green sea turtle can lay several clutches of eggs before she leaves the nesting grounds.

After about two months, the eggs hatch and the hatchlings make their way to the water. The newly hatched green sea turtles are very susceptible to predators, exposure, and losing their way. Birds, mammals, and other predators love feasting on the young turtles.

For green sea turtle hatchlings that reach the water, it takes at least 20 to 50 years to reach sexual maturity. A healthy individual can be expected to live 80 to 100 years.

Green sea turtles are an endangered species that have undergone an estimated 90 percent population decrease over the past half century. Climate change and habitat loss are threats to these animals, as well as diseases such as fibropapilloma. Light pollution near beach nesting sites poses a risk to sea turtle hatchlings, which may get confused and crawl toward the light instead of traveling to the ocean. Green sea turtles and their food also face overhunting, including for use in sea turtle soup.

Green sea turtles are protected by national and state laws, as well as international treaties, and the National Oceanic and Atmospheric Administration’s National Marine Fisheries Service conducts regular monitoring of green sea turtle populations. Restoration efforts are underway in places like the Gulf of Mexico, where nesting beaches are being restored and enhanced.

Many coastal communities in Florida have developed lighting ordinances to help more hatchlings reach the sea. Bycatch (accidental capture by commercial and sport fishermen) of green sea turtles is being reduced thanks to fishing gear modifications (such as the use of TEDs, or turtle exclusion devices), changes to fishing practices, and closures of certain areas to fishing during nesting and hatching seasons. However, according to the U.S. Fish & Wildlife Service, due to the long-range migratory movements of sea turtles between nesting beaches and foraging areas, long-term international cooperation is essential for the recovery and stability of nesting populations.

Green sea turtles received their name for the color of their body fat, which is green.