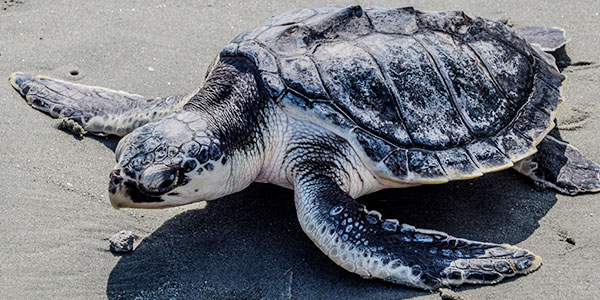 Kemp's ridley sea turtles are considered the smallest marine turtles in the world and are also the most endangered. The Kemp's ridley has a triangular-shaped head and a slightly hooked beak with large crushing surfaces. Adults have a nearly circular carapace (top shell) that’s grayish green, while the plastron (bottom shell) is pale yellow to cream in color. Hatchlings are black on both sides. The carapace is often as wide as it is long and contains five pairs of costal scutes. Each of the front flippers has one claw, while the back flippers may have one or two. On average, adults weigh about 100 pounds (45 kilograms) with a carapace (top shell) measuring between 24 to 28 inches (60 to 70 centimeters) in length.

Kemp's ridleys are usually found in nearshore and inshore waters of the northern Gulf of Mexico, especially in Louisiana waters, which are their primary feeding grounds. Known for their unique synchronized nesting habit, large groups of Kemp's ridleys gather off a particular nesting beach near Rancho Nuevo, Mexico, in the state of Tamaulipas. Females then come ashore in subsequent waves to nest. This event is known as an arribada, which means "arrival" in Spanish. Nearly 95 percent of Kemp's ridley nesting occurs in this one confirmed arribada. A small amount of females nest consistently in Veracruz, Mexico, and at Padre Island National Seashore, Texas.

Depending on their breeding strategy, male Kemp's ridleys appear to occupy many different areas within the Gulf of Mexico. Some males migrate annually between feeding and breeding grounds, yet others may not migrate at all, mating with females opportunistically encountered.

Kemp's ridleys are often found in estuaries, in particular in or near shallow seagrass habitats. The preferred sections of nesting beach are backed up by extensive swamps or large bodies of open water having seasonal narrow ocean connections. Hatchlings spend 2 to 10 years in an open ocean environment, then return to the shore area to develop until they reach adulthood. These shallow areas typically contain muddy or sandy bottoms where prey can be found. Kemp's ridleys rarely venture into waters deeper than 160 feet (49 meters).

This turtle’s diet consists mainly of swimming crabs, but may also include fish, jellyfish, and an array of mollusks. Foraging zones range from the Yucatán Peninsula to southern Florida, but primarily occurs on the Gulf of Mexico's continental shelf.

Because of its long migration patterns, the Kemp's ridley sea turtle spends much of its life in isolation. Socialization typically occurs during mating and nesting.

Female Kemp's ridleys return to nest on the same beach where they were hatched (from May to July)—usually in the daylight hours—to lay two to three clutches of approximately 100 eggs, which incubate for 50 to 60 days. Upon emerging from the buried nest, hatchlings weigh roughly half an ounce (14 grams) and measure around 1.5 inches (3.8 centimeters). Sexual maturity is estimated to be 10 to 15 years of age. Individuals surviving to adulthood may live 30 years and possibly up to 50 years.

Kemp's ridleys have been designated as endangered since 1970 under the Endangered Species Act, and are internationally listed as critically endangered. They’re considered the most seriously endangered of the sea turtle species. In addition to threatened nesting habitat, accidental capture in fishing gear like shrimp trawls, gill nets, longlines, traps, and dredges continues to be the primary threat to the Kemp's ridley.

Efforts to recover sea turtle populations led to a partial recovery prior to the Gulf oil spill. While on a road to recovery, the Kemp’s ridley still is a long way from to returning to population levels that would lead to removal from the endangered species list.

Kemp’s ridley sea turtles are protected by various international treaties and agreements, as well as national laws. Mexico's protection of the turtle’s nesting areas in that country has provided significant gains towards conservation of the species. Additionally, like for other sea turtles, NOAA’s National Marine Fisheries Service and the U.S. Fish & Wildlife Service conduct regular monitoring of Kemp’s ridley populations. Bycatch of ridley turtles (accidental capture by commercial and sport fishermen) is being reduced by fishing gear modifications (such as the use of TEDs, or turtle exclusion devices), changes to fishing practices, and closures of certain areas to fishing during nesting and hatching seasons.

The Kemp’s ridley sea turtle is named after Richard M. Kemp, the fisherman who first described the species in Florida.