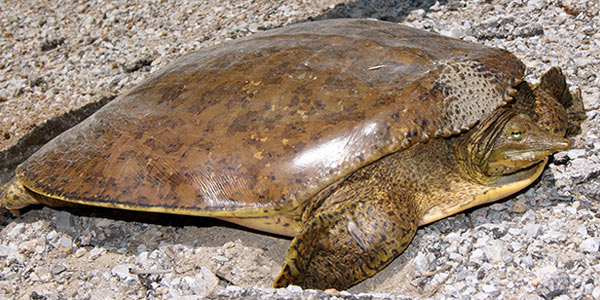 The spiny softshell turtle is one of the largest freshwater turtle species in North America. They can be distinguished from other turtle species by their carapace. Unlike most other turtles, their shell is soft, flat, and rubbery. The edges of the carapace are pliable with small spines (males have more than females). An adult female's carapace can be anywhere from 7 to 19 inches (18 to 48 centimeters) in length, while the male's is much smaller at 5 to 10 inches (13 to 25 centimeters) in length. The turtle’s nose is long and piglike, and its feet are fully webbed. This helps the spiny softshell turtle swim, since it spends most of its life in the water.

The spiny softshell turtle is spread throughout most of the United States, from the central-eastern U.S. to Wisconsin and Minnesota, and as far south as Mexico. Its habitat includes rivers, ponds, streams, and lakes with a sandy or muddy bottom and relatively little vegetation.

The spiny softshell turtle will eat almost anything in the water that will fit into its mouth, which may include aquatic insects, crayfish, and the occasional fish. They will bury themselves under a layer of mud at the bottom of a lake, with only their head sticking out, and catch prey as it passes by.

The spiny softshell turtle is a diurnal species. It spends most of the day in the sun, foraging for food. When it feels threatened, it buries itself in the sand and leaves just its head visible.

These reptiles are also able to breathe underwater due to the pharyngeal lining, cloacal lining, and skin.

Males nudge a female's head while swimming in an attempt to court her. With approval from the female, the male will swim above her, but will not clasp her with his claws like other turtle species. Spiny softshell turtles typically breed in May. Females lay anywhere from 4 to 38 eggs on sandbars or in loose soil. The eggs hatch sometime in August or September. They can live up to 50 years in the wild.

Although not listed as threatened in the United States, spiny softshell turtles still face some threats, including habitat destruction and chemical pollution.

The spiny softshell turtle, in parts of its range, hibernates in mud for about half of the year.