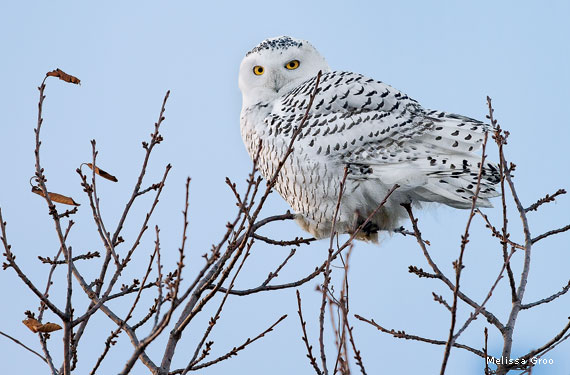 Ecologists at the University of Saskatchewan offer new insight into the winter survival skills of snowy owls that endure harsh weather on the prairies of northern Canada. Using data from volunteers who helped tag and track owls in subzero temperatures, the researchers found that few of the 537 birds they studied during 18 winters showed signs of starvation. Many of the raptors actually increased their fat stores during the cold, nonbreeding months. Because female snowies are larger than males, the ecologists report in The Auk: Ornithological Advances, they dominate prime territories (giving them better access to food) and seem to be healthier at winter’s end. Snowies, which have dense plumage that insulates them from cold, may use winter, the researchers speculate, “to recharge and build up their reserves before returning to their breeding grounds.”

Scientists have estimated that a swordfish can swim as fast as 60 miles per hour in the open ocean. Now, marine biologists in the Netherlands have identified the source of that speed: a large gland located at the base of the animal’s long, pointed upper bill. While examining specimens and MRI scans of swordfish, researchers at the University of Groningen discovered a network of capillaries that connects the gland to the animal’s skin and secretes an oily substance through tiny pores. Writing in the Journal of Experimental Biology, they note that oil from the gland, combined with microscopic projections on the skin, produces a super water-repellent surface that greatly reduces drag. Essentially, a swordfish lubricates itself as it rockets through the sea.

Snowy Owl Snowstorm
Winter Havens for Snowy Owls
Ranger Rick: Snowy Owls
How to Enjoy Owls in Winter (or Anytime)
Hooked on Billfish
Overexploitation of Fish and Other Aquatic Species
In Search of Guilt-Free Seafood