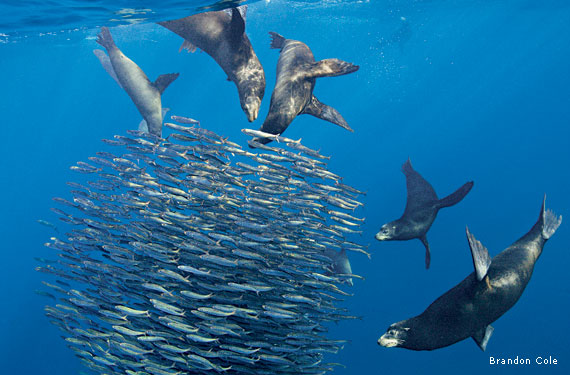 Sardines form a “bait ball” to hamper efforts of predators such as California sea lions to catch individuals.


A PROBLEM LONG BREWING IN THE OCEAN has become painfully obvious on land. Wildlife rehabilitators have found thousands of dying sea lion pups in central and southern California. The state’s brown pelicans have had difficulty breeding, and scientists have counted hundreds of dead or dying tufted puffins on the Pribilof Islands off the coast of Alaska. While these events may seem unrelated, all have the same culprit: starvation on an unprecedented scale because of declines in forage fish.

Once-plentiful schools of sardines, herring, anchovies and other small fish—which feed sea lions, birds and a host of other animals—have declined severely off the West Coast. Scientists estimate that during the past decade sardine numbers have plummeted more than 90 percent and the anchovy population has dropped from more than 1 million tons to as low as 22,000 tons.

While no one cause of their decline has been identified, a contributing factor may have been a hotter ocean. The so-called “Blob,” a large expanse of warm seawater off the Pacific Coast, was first noted in 2014. During the latest El Niño from 2015 to 2016, ocean temperatures in this region increased as much as 9 degrees F above normal. Such events could have chased fish to cooler waters.

In addition, because forage fish often swim in shimmering “bait balls” that ripple through the ocean, they can be easily overfished as fishermen’s nets can engulf entire schools. This can be devastating to a population already under stress. “We end up in cases where fishermen are catching 60 to 80 percent of the population at a time when the population is collapsing,” says Tim Essington, a University of Washington marine ecologist. “In times of scarcity, every forage fish really matters to predators.” 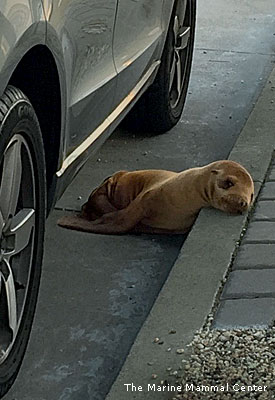 In 2015, alarmed by grim stock numbers and starving wildlife, federal fish managers banned commercial fishing of Pacific sardines, sand lance and silversides and are now considering reductions in anchovies. States are also getting on board. Oregon imposed limits on harvesting certain forage fish in October, and similar restrictions are pending in California.

The Association of Northwest Steelheaders, National Wildlife Federation’s Oregon affiliate, worked for four years to obtain such protections. “Forage fish are important food for larger species,” says Norm Ritchie, a Steelheaders and NWF board member. “This means as much for salmon, whales and seabirds as it does for sardines.”

The decline of such forage fish caused thousands of sea lion pups to starve, including one that collapsed in San Francisco last February.

Forage fish—which are typically less than a foot long—eat microscopic marine plants and animals drifting close to the ocean’s surface and then convert this food into protein. Many marine animals in turn depend on forage fish for food. The small fish can comprise as much as 70 percent of the diet of Chinook salmon and 90 percent of the food for brown pelicans. In the Atlantic, menhaden is the most important forage fish, feeding everything from striped bass and humpback whales to ospreys and eagles.

Forage fish also account for a third of the seafood harvested each year, with commercial fishing fleets scooping up an estimated $5.6 billion worth worldwide. Sardines and anchovies caught off the West Coast are shipped to Australia to fatten farm-raised bluefin tuna, while menhaden harvested from off the East Coast and the Gulf of Mexico are used in livestock feed, pet food, fertilizer and nutritional supplements. Leaving forage fish in the ocean, however—where they feed larger, commercially important species such as salmon and cod—could be worth more than $11 billion, report scientists of the Lenfest Forage Fish Task Force. 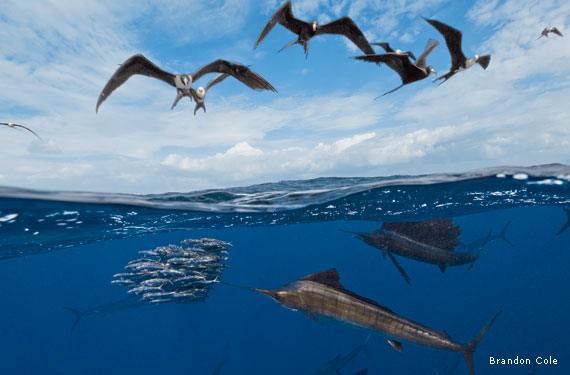 Frigatebirds and sailfish vie for sardines in the Gulf of Mexico. A host of seabirds and marine species rely on forage fish—a vital part of the intricate ocean food web.

Working with the Pew Charitable Trusts and state affiliates, NWF is promoting an ecosystem-based approach to managing forage fish, one that takes into account how these fish fit into the marine food web rather than managing them individually. “This is a positive decision for everyone who has a stake in a healthy ocean,” says Paul Shively, Pacific Ocean project director for the Pew Charitable Trusts.

This past fall, NWF joined its affiliates the Delaware Nature Society, Florida Wildlife Federation (FWF) and North Carolina Wildlife Federation (NCWF) in supporting the Atlantic States Marine Fisheries Commission (ASMFC) amendment that would take an ecosystem-based approach to managing menhaden. “It’s a very simple principle: You have to have forage fish if you are going to have game fish species and commercial fish species,” says Tim Gestwicki, NCWF chief executive officer.

In the Southeast, FWF also is working to persuade state wildlife agencies to take a proactive ecosystem-based approach to managing southern Atlantic and Gulf Coast forage fish. “We want to be prepared for potential increases in pressures on forage fish as has occurred elsewhere,” says FWF President Manley Fuller.

Indeed, forage fish are connected to so many other living creatures that their true importance has yet to be fathomed. One thing is certain: These moveable feasts help complete the marine circle of life—a circle that is very hard to repair once broken.


Environmental writer Ken Olsen is based in Portland, Oregon.