President’s View: To Save a Species, Save Its Habitat 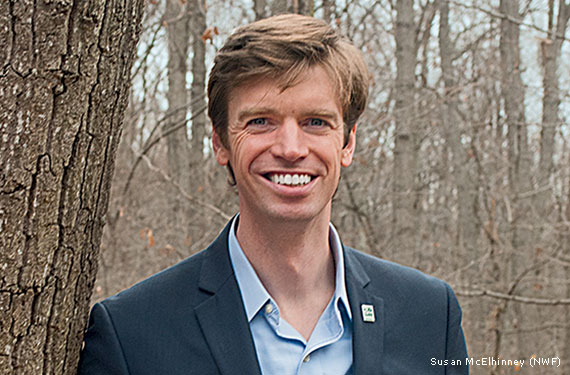 
IN THE FEBRUARY-MARCH ISSUE of National Wildlife magazine, we shared how more than one-third of North America’s fish and wildlife species are at risk of extinction in coming decades. Now we need your help both elevating the urgency of addressing America’s wildlife crisis and finding solutions to ensure wildlife thrive in our rapidly changing world.

Conservation successes across our nation are often considered the envy of the world. Yet for every successful recovery—from white-tailed deer, elk and bighorn sheep to wild turkeys, wood ducks and bald eagles—there are hundreds of species in trouble. Populations of songbirds, pollinators and amphibians, mammals from bats to moose and many aquatic species are plummeting. These are today’s canaries in the coal mine, serving as harbingers of the emerging sixth extinction and calling us to act, not just for wildlife but for our own health, prosperity and ultimate survival.

Healthy wildlife populations need healthy habitat. Habitat corridors bisected by roads, development or walls can impede the ability of animals to find food, mate, diversify the gene pool and make seasonal migrations. For these reasons, increasing landscape connectivity is a priority for the National Wildlife Federation.

Millions of acres of habitat are also being destroyed annually by raging forest fires. While natural fires can rejuvenate habitat by clearing out old brush, thinning the tree canopy and allowing new growth, we’re now experiencing record fires that burn hotter, longer and larger than ever before. These fires are fueled by drier soils, dead trees from bark beetle infestations and a lack of habitat restoration to improve forest health. To reduce the risk of devastating fires, the Federation and its state affiliates are working hard to secure sufficient funding for proactive forest restoration.

Both of these habitat challenges are exacerbated by warming temperatures due to a changing climate. Many species are having migratory problems as they expand their ranges northward or seek cooler elevations. Fires worsen as hotter summers reduce moisture levels in soils, and warmer winters prevent the traditional cyclical die-off of hungry bark beetles.

The good news is that we can address these challenges if we each do our part. The Federation will soon be spotlighting specific actions the nation needs to take to save America’s wildlife—and we’ll need your help making this vision a reality. Thank you for joining us in this noble pursuit!