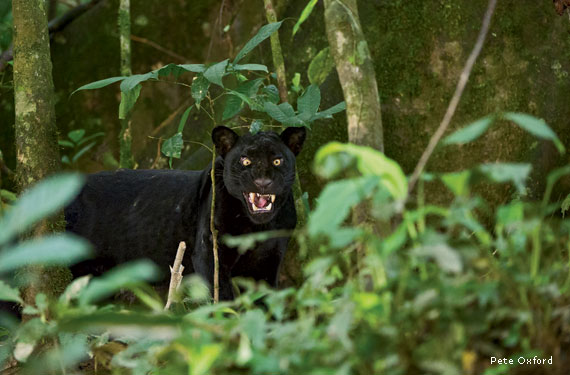 SIGHTING A RARE BLACK PANTHER in the wilds of Ecuador gave veteran conservation photographer Pete Oxford the thrill of his long career. “I had found the Holy Grail,” he says of this chance encounter—yielding what are likely the first images of a black panther (or melanistic jaguar) made in the wild without camera traps, baiting or weeks-long waits in blinds.

Oxford was exploring eastern Ecuador’s Tiputini River when he and a local friend rounded a bend and glimpsed the cat. It vanished in 30 seconds. After intently scanning the shore, they spotted it again—and that’s when the magic happened. “It walked straight toward us and began grooming!” says Oxford, who had a luxurious 80 minutes to observe the panther from less than 30 feet away. After a final languid yawn (above), the cat ambled off, leaving Oxford an indelible memory. “It was magnificent, evocative, velvety and majestic,” he says—“an iconic moment” in the wild that likely will never come again.

To submit images for consideration, write to nationalwildlifephoto@gmail.com with “Nature’s Witness” in the subject line.

Showing Big Cats to Save Them
Cougars: On the Trail of the Ghost Cat
The Cat the Loves Water
Keep the Wild in Wildlife Photography