Dragonflies’ brief but glorious life on the wing 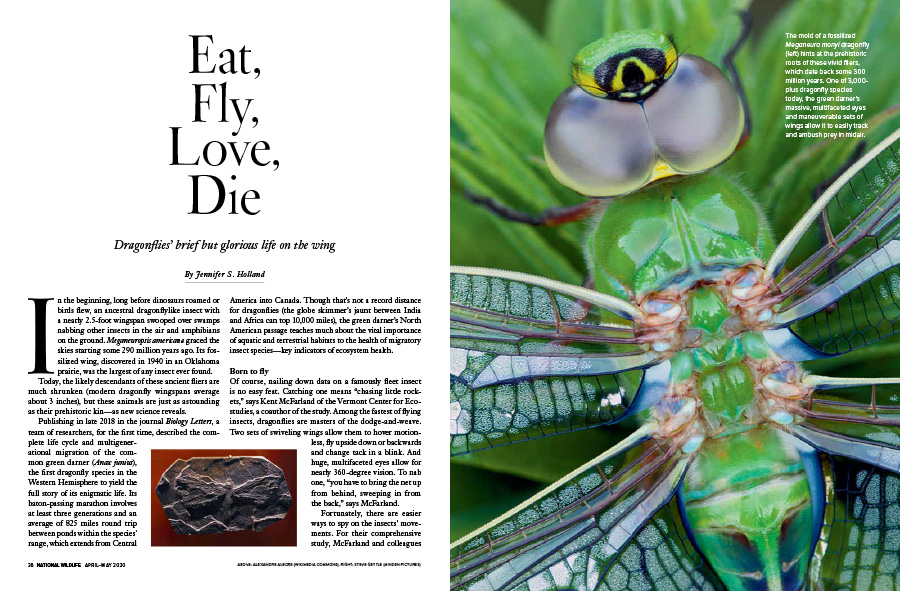 IN THE BEGINNING, long before dinosaurs roamed or birds flew, an ancestral dragonflylike insect with a nearly 2.5-foot wingspan swooped over swamps nabbing other insects in the air and amphibians on the ground. Meganeuropsis americana graced the skies starting some 290 million years ago. Its fossilized wing, discovered in 1940 in an Oklahoma prairie, was the largest of any insect ever found.

Today, the likely descendants of these ancient fliers are much shrunken (modern dragonfly wingspans average about 3 inches), but these animals are just as astounding as their prehistoric kin—as new science reveals.

Publishing in late 2018 in the journal Biology Letters, a team of researchers, for the first time, described the complete life cycle and multigenerational migration of the common green darner (Anax junius), the first dragonfly species in the Western Hemisphere to yield the full story of its enigmatic life. Its baton-passing marathon involves at least three generations and an average of 825 miles round trip between ponds within the species' range, which extends from Central America into Canada. And though that’s not the record for dragonflies (the globe skimmer’s jaunt between India and Africa can top 10,000 miles), the green darner’s North American passage teaches much about the vital importance of aquatic and terrestrial habitats to the health of migratory insect species—key indicators of ecosystem health.

The mold of a fossilized Meganeura monyi dragonfly hints at the prehistoric roots of these vivid fliers, which date back some 300 million years.

Of course, nailing down data on a famously fleet insect is no easy feat. Catching one means “chasing little rockets,” says Kent McFarland of the Vermont Center for Eco-studies, a coauthor of the study. Among the fastest of flying insects, dragonflies are masters of the dodge-and-weave. Two sets of swiveling wings allow them to hover motionless, fly upside down or backwards and change tack in a blink. And huge, multifaceted eyes allow for nearly 360-degree vision. To nab one, “you have to bring the net up from behind, sweeping in from the back,” says McFarland.

Fortunately, there are easier ways to spy on the insects’ movements. For their comprehensive study, McFarland and colleagues consulted 21 years of observations logged online by dragonfly enthusiasts and citizen scientists, which revealed clues about natural cues that prompt the insects to emerge and migrate. The biologists also analyzed wing samples of 852 dragonfly specimens from museum collections and recent field captures in eight countries, with some specimens dating back 140 years. Those wing bits yielded research gold.

Dragonfly eggs hatch in water, where the larvae, or nymphs, begin to develop what will later emerge as wings. Those wings pick up stable hydrogen isotopes—chemical signatures that are specific to the waters where the tissue develops. These isotopes help experts map an insect’s birthplace. It’s not as precise as a GPS tracker, says McFarland. “But we get regional information—this one came from the Gulf Coast or the mid-Atlantic, say—which is better than we had before.”

Birthplace is just the first piece of the puzzle. Turns out, the ratio of three forms of hydrogen in the atmosphere shifts with latitude, a clue that allowed the dragonfly researchers to piece together the green darner’s three-generation migration life cycle.

A twelve-spotted skimmer soars like a biplane on its hunt for insects in Vermont.

The darner family trip typically goes like this: As early spring temperatures hit 48 degrees F—“a seemingly magic number,” says McFarland—dragonflies born in the Caribbean, Mexico or southern United States emerge from natal ponds, unfurl their wings and fly an average of 400 miles north. There, that first generation mates, lays eggs in wetlands and dies—a total adult lifespan of less than two months. Once the nymphs of this second generation reach adulthood, they’ll swarm south again, mate, lay eggs and die. Those eggs become the third generation, which typically stays put, a resident population whose own offspring will eventually zoom northward, following in the wingbeats of their great grandparents.

Shedding additional light on the dragonfly’s migration, Samantha Knight, Ryan Norris and colleagues at the University of Guelph in Ontario glued raindrop-size trackers to the underside of 38 green darners (the only species large enough to handle them) to find out how environmental conditions might affect their flight. As the insects migrated from southern Ontario into the northern United States, satellites pinged back data on temperature and precipitation, plus the insects’ flight speed and distance flown.

Not surprising, “tailwinds positively influenced migration speed, as did warmer temperatures,” says Norris. Light rain didn’t trouble the insects. Their study yielded two new records: a darner that flew more than 30 miles an hour (and, without the transmitter, likely could have flown faster) and traveled 75 miles in a single day, nearly the distance between New York City and Philadelphia.

A dragonfly’s speed, agility and superhero vision make it a lethal ambush predator, able to track, nab and devour insect prey in midair, often sneaking up from below. Studies show that dragonflies successfully catch their targets more than 95 percent of the time, and their prey includes many insects that transmit disease or ruin picnics, including mosquitoes, gnats, horseflies, midges and flying ants and termites.

The dragonfly’s voracious appetite for insects has long piqued interest in the pest-management industry. “Since the 1960s, people have tried to use dragonflies as biological controls for malaria and dengue vectors,” says entomologist Jessica Ware of the American Museum of Natural History. That effort had limited success. Gardeners have more luck enlisting dragonflies as pest managers by building ponds for nymphs, then enjoying the adults’ aerial antics.

As a male common green darner grips his mate's head, she deposits her eggs in a Montana river. The hatchlings, or nymphs, live aquatic lives for months or years, eating mosquito larvae and other prey before emerging as adults, soon to fly.

Riding high, or fading out?

Though researchers are figuring out the dragonfly’s story, much remains unwritten, particularly about the animal’s ability to cope with environmental change. Found on every continent but Antarctica, dragonfly species face a litany of human-driven assaults across their range. Experts believe at least one in 10 species is at risk, particularly as the water bodies they depend on become degraded. Fluctuations in climate especially worry some experts. For green darners, “northward migrations are limited by temperature, and nymph development in the aquatic environment is also temperature dependent,” says Michael Hallworth of the Northeast Climate Adaptation Science Center, who led the stable-isotope study. “It means they could be impacted by climate change during one or more stages of their life cycle.”

Across the globe, we are in the midst of what some call an “insect apocalypse,” with an estimated 40 percent of all insect species at risk of extinction in coming decades due to habitat loss, pesticide use, shifting temperatures and other factors. “We don’t know whether the rate of dragonfly decline is similar to that of other insects,” says Ware. But she cautions researchers to “pick up the pace” in learning the secrets of this remarkable, ancient group of fliers.

Being a dragonfly champion

Efficient and voracious ambush predators, dragonflies can devour as many as 100 mosquitoes a day. They also munch on gnats, black flies and other peskies that can ruin your afternoon. So how can you lure these beautiful, water-dependent fliers to your yard?

Install a fish-free pond. Give it shallow sides and a center depth of about two feet. Place it in partial sun and add a mix of submerged, floating and emergent plants such as wispy grasses where dragonflies can roost and lay eggs.

Jennifer S. Holland explored oil impacts on deep-sea corals in the Gulf of Mexico in our February–March 2020 issue.