Rarely garnering public concern, thousands of native-plant species are at risk of extinction. 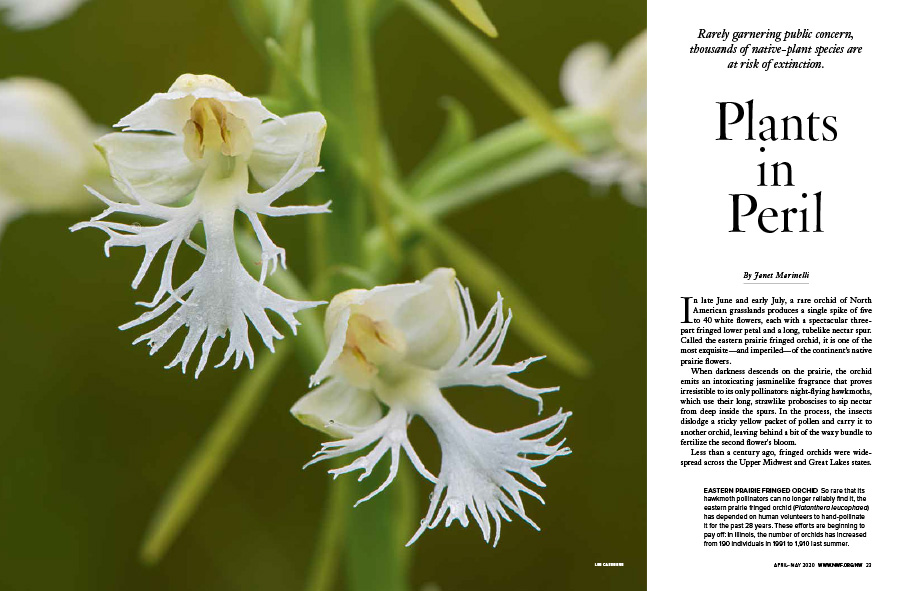 EASTERN PRAIRIE FRINGED ORCHID So rare that its hawkmoth pollinators can no longer reliably find it, the eastern prairie fringed orchid (Platanthera leucophaea) has depended on human volunteers to hand-pollinate it for the past 28 years. These efforts are beginning to pay off: In Illinois, the number of orchids has increased from 190 individuals in 1991 to 1,910 last summer. (Photo by Lee Casebere)

IN LATE JUNE AND EARLY JULY, a rare orchid of North American grasslands produces a single spike of five to 40 white flowers, each with a spectacular three-part fringed lower petal and a long, tubelike nectar spur. Called the eastern prairie fringed orchid, it is one of the most exquisite—and imperiled—of the continent’s native prairie flowers.

When darkness descends on the prairie, the orchid emits an intoxicating jasminelike fragrance that proves irresistible to its only pollinators: night-flying hawkmoths, which use their long, strawlike proboscises to sip nectar from deep inside the spurs. In the process, the insects dislodge a sticky yellow packet of pollen and carry it to another orchid, leaving behind a bit of the waxy bundle to fertilize the second flower's bloom.

Less than a century ago, fringed orchids were widespread across the Upper Midwest and Great Lakes states. (In 1927, Illinois botanist Herman Pepoon called the plants a “blanket of white on the low, moist prairie.”) But by 1989, the orchid was in such steep decline that the government listed it as threatened under the U.S. Endangered Species Act. Today, with all but 1 to 2 percent of the continent’s tallgrass prairie destroyed by bulldozer and plow, the eastern prairie fringed orchid hangs on primarily in small, isolated habitat fragments.

Unfortunately, few if any hawkmoths find their way to these tiny pocket prairies, says U.S. Fish and Wildlife Service biologist Cathy Pollack. Even if a potential pollinator were to show up, some sites have so few blooming orchids that the insect would likely miss them and instead seek nectar from more-abundant flowers. What’s more, the sheer distance between habitat fragments has made it difficult for moths that locate orchids to move freely among different plant populations to promote the cross-pollination that is needed to ensure genetic health.

Imperiled plants such as the fringed orchid rarely attract as much attention as at-risk animals, yet they actually outnumber them, with 943 U.S. plant species federally listed as endangered or threatened compared to 718 animals. Globally, Craig Hilton-Taylor, head of the International Union for Conservation of Nature’s Red List Unit, says that 3,229 plants are considered critically endangered (“an extremely high risk of extinction in the wild”), 5,727 endangered (“a very high risk”) and 6,817 vulnerable (“a high risk”). Because only 11 percent of known plant species have been assessed for inclusion on the Red List, these numbers are certain to rise, he adds.

In September 2019, German scientists published a report in Conservation Letters revealing that the majority of 355 plant species surveyed in the northeastern part of their country had suffered “significant losses” during the past two decades, with “moderately common” plants experiencing the greatest declines. Yet unlike comparable recent reports on insect and bird declines—which made headlines worldwide—the plant study was largely ignored. That troubles botanist Bruce Stein, the National Wildlife Federation’s chief scientist. “If we are interested in conserving the diversity of life on Earth,” he says, “we need to be very concerned about the large numbers of at-risk and declining plants.”

At-risk plants also receive considerably less conservation funding and legal protection than animals. According to Abby Meyer, executive director of Botanic Gardens Conservation International in the United States (BGCI-US), plants in this country get less than 5 percent of total federal funding for endangered species recovery. And while threatened or endangered animal species are protected on both public and private property, plants are safeguarded only on federal lands. Even if the last individual of a plant species was growing on private land, the owners “could legally pull it up out of the ground and throw it in the garbage,” says Johnny Randall, director of conservation programs at the North Carolina Botanical Garden.

Given this dearth of funding and legal protection, coaxing imperiled plants along the road to recovery can benefit from volunteer people power. There are many ways to engage in plant conservation, even in your backyard. “By gardening with native plants,” says Mary Phillips, senior director of NWF’s Garden for Wildlife™ program, “you can help prevent declining common species from suffering the same fate as endangered and threatened plants.”

SMOOTH CONEFLOWER This wildflower (Echinacea laevigata) is a close—but rare—relative of the familiar purple coneflower common in backyard gardens. Prior to European settlement, the species' native haunts—prairielike habitats and sunny oak savannas—were common throughout the southeastern United States, maintained by fire and large grazers such as bison. But agriculture, development and fire suppression have destroyed most of these habitats, and the plant now survives precariously along sunny roadsides.

SWAMP PINK Harbingers of spring, the fragrant flowers of swamp pink (Helonias bullata) are guaranteed to delight anyone willing to venture into the wet, shady and often-secluded locations where the plant grows on mossy hummocks. Like many wetland denizens, swamp pink has been decimated by the destruction and degradation of its habitat. Once found from New York to Georgia, this threatened wildflower’s last strongholds today are isolated pockets of suitable habitat on the coastal plain of New Jersey, Delaware and Maryland.

KUENZLER HEDGEHOG CACTUS Found only in the rocky central highlands of New Mexico, Kuenzler hedgehog cactus (Echinocereus fendleri var. kuenzleri) is distinguished from other hedgehog cacti by its white spines and large magenta flowers. The cactus is threatened by uncontrolled wildfires, livestock grazing and poaching for sale in the horticulture trade. It is far from the only cactus in trouble: A 2015 global assessment found that 31 percent of all cactus species are at risk of extinction—making these plants more threatened than birds and mammals.

MEAD'S MILKWEED Once each year, Mead’s milkweed (Asclepias meadii) produces a single stem with an umbel of nodding, pale-green flowers. Attracted to these blooms, monarch butterflies dangle upside down from the blossoms to drink nectar, and their caterpillars feed on both flowers and leaves. Once widespread across the Midwest, Mead's milkweed has become rare as its tallgrass prairie habitats have been destroyed. Surviving plants are plagued by a litany of threats, from agriculture and urbanization to herbicides and invasive species.

WESTERN LILY The United States is home to several native lilies, including the western lily (Lilium occidentale). This endangered wildflower grows only within a narrow, 200-mile stretch of coast between southern Oregon and Northern California, usually within sight of the sea. It is declining rapidly due to coastal development, cranberry farming, poaching for sale to plant collectors and clearing and draining of wetlands. Hummingbirds are the primary pollinators of the plant, which produces more nectar than any other U.S. lily.

ALABAMA CANEBRAKE PITCHER PLANT Like its relatives in the genus Sarracenia, Alabama canebrake pitcher plant (Sarracenia rubra ssp. alabamensis) is carnivorous, trapping insects at the bottom of its pitcher-shaped leaves where digestive enzymes dissolve the animals. This rare subspecies grows only in hillside seepage bogs and bottomland streamsides at about a dozen sites in two Alabama counties. These sites have been poached by plant collectors so often that conservationists no longer disclose their locations.

New York writer Janet Marinelli reported on the decline of native oaks in the October–November 2019 issue.

The U.S. Biodiversity Crisis »
Broader Role for Botanical Gardens »
More Than Dirt: Healthy soil can help save the planet »