What makes snakes and spiders so scary? And can we learn to give less-lovable animals their due? 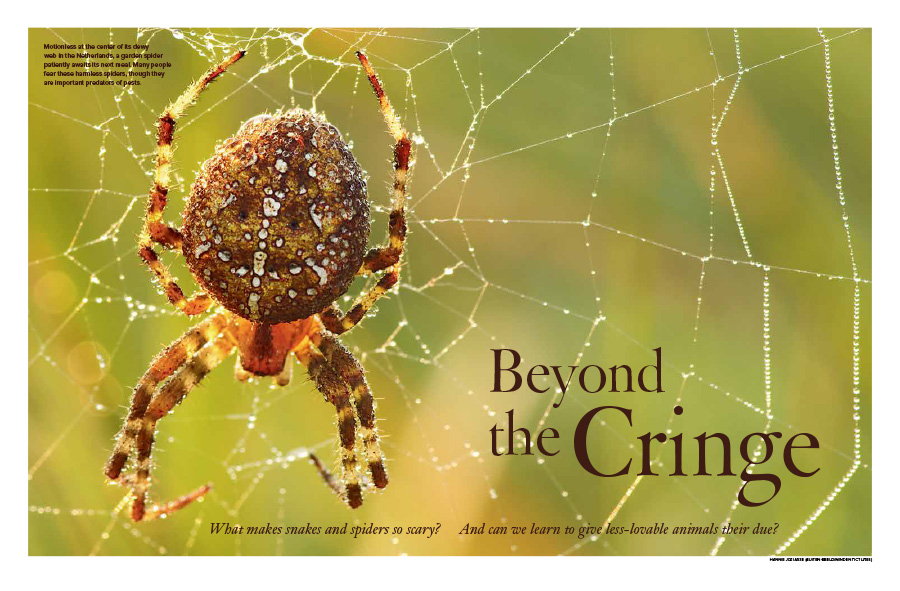 Motionless at the center of its dewy web in the Netherlands, a garden spider patiently awaits its next meal. Many people fear these harmless spiders, though they are important predators of pests. (Photo by Hannie Joziasse/Buiten-Beeld/Minden Pictures)

I ONCE HELD A FOUR-MONTH-OLD PANDA. Jealous? Of course you are.

Because, for most of us, there’s something about a panda cub that makes us say “awwwww.” Big eyes in a big head. Helplessness. A wobbly gait. Smallness. Squeaky sounds. Fuzziness. Such “cute” traits are evolution’s tricks to lure us in and activate our need to cuddle and protect. The same traits in our own babies draw us to pick up a crying infant, to feed and care for our young. Nature wraps us around their tiny fingers and toes to make sure we go on propagating our species. 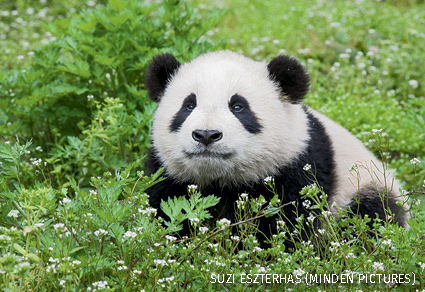 But there are plenty of animals that lack cuteness—or even worse, in many people they provoke fear, disgust or both. Some of us shudder looking at just a picture of a snake or spider. Scientists have long debated why we have these feelings and how deep the reactions go. Are they built into our DNA or do they develop from cues we get from kin and culture? The evidence suggests it’s a bit of both: We are primed to pay attention to certain animals because our earliest ancestors likely experienced them as dangerous (or in some cases, edible). But we also learn from our contemporaries whether to love or loathe these “unhuggables.”

“There’s a package of traits that make up what I call ‘the alien,’” says Jeff Lockwood, an entomologist at the University of Wyoming. That package includes “too many” legs (or none at all), a creeping or spasmodic gait and unpredictable movements. “We can’t quite deny these things are animals, and we recognize them as fellow beings, but they don’t do things in the proper way,” he says. “There’s something about the skittering of the cockroach, for example, that conveys it’s been up to no good.”

In their potential to reach high numbers, both insects and spiders tap into deep down fears of infestation—of our homes and bodies. “The aversion to these creatures can be like politics or religion,” says University of California–Riverside entomologist Rick Vetter. “Some people just hate them, period. They see them as robotic and cold,” unable to connect with us through meaningful eye contact. And along with snakes, they’re just not built to cuddle.

Even people who appreciate the less-huggable species have their limits. Lockwood has written about experiencing “blind, irrational, unaccountable terror” when caught in a swarm of grasshoppers. Joe Mendelson, a herpetologist at Zoo Atlanta, wouldn’t mind grasshoppers, he says, and he’d be quite content to be wrapped in snakes or covered in frogs. But spiders? “There’s a lot of shrieking and contortions if one gets on me,” he says. “I’m not worried about getting bitten; it’s something about all those legs. I’m sweating just thinking about them.” For some folks, these heebie-jeebies deteriorate into true phobias. About one in 10 people in the United States report suffering from one or more phobias—and spiders, insects and snakes consistently rank high on the list of things most frightening. 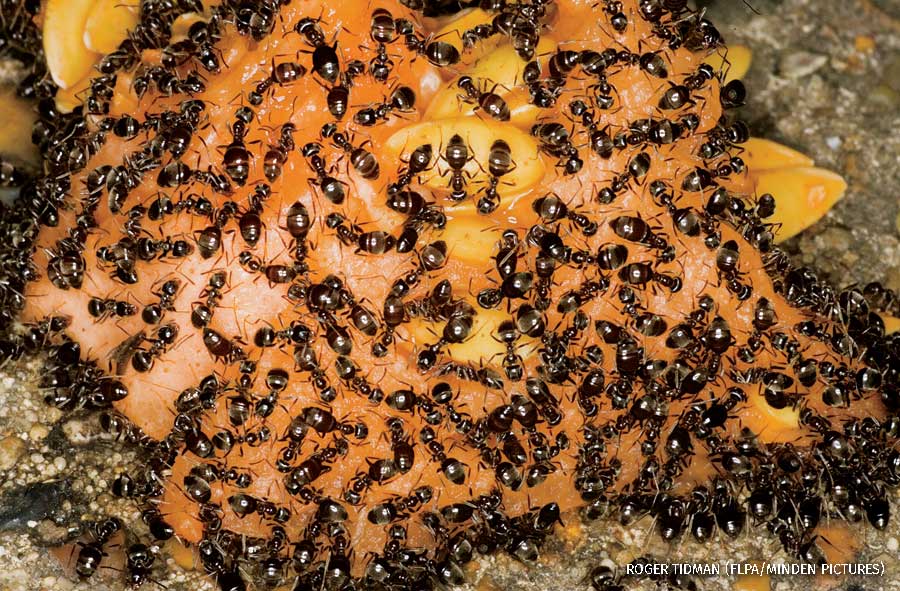 Hundreds of black garden ants (above) swarm over a ripe melon. With their capacity to reach huge numbers, ants and other insects tap into our fear of infestation. In contrast, the big head, helplessness and other “cute” traits of baby mammals, such as a giant panda cub (above), trigger a nearly universal human desire to hold and protect.

In truth, though members of some animal groups can be dangerous, the vast majority pose no threat. Most spider species don’t have fangs long or strong enough to break human skin. The fearsomely named, venomous black widow can bite people, but rarely does, and only in self-defense. Nationwide, about 2,600 black widow bites are reported annually, and a study of some 23,000 exposures to the spider’s venom over eight years found that only about half the victims suffered even mild effects. During two decades studying the brown recluse spider, Vetter and colleagues compiled a list of dozens of kinds of lesions wrongly blamed on this much-maligned arachnid, including infections from bacteria, viruses and fungi, poison ivy exposure, heat and chemical burns, drug reactions and even herpes.

Likewise, snakes are not the villains many feel them to be. Worldwide, only about 15 percent of the more than 3,800 snake species are considered dangerous to humans. In the United States, the Centers for Disease Control and Prevention estimates that 7,000 to 8,000 people are bitten by (potentially) deadly snakes each year, but just five die—usually those who do not seek immediate medical care.

Even some mammals make the fear-and-loathing list. Now that an Asian bat species has been fingered as the likely source of the new coronavirus, bats’ helpful role in controlling mosquito pests may be forgotten. And rats have long been viewed as nothing more than plague-bearing sewer scum. Are these animals vastly better at disease-spreading than other mammals? Not always. Adorable hedgehogs transmit Salmonella, for example, and burgeoning white-tailed deer populations are key contributors to the dramatic growth of Lyme disease and other tick-borne illnesses.

“Unfortunately, people get hung up on an aspect they find distressing, and they write off entire groups of important animals,” says Mendelson. “It’s a lazy, bad habit that makes something like a ‘Save the Snakes’ campaign a brutal challenge” for conservationists. That bad habit matters, because all of biodiversity matters. “Many of the species that people have an aversion to, including snakes and spiders, are absolutely essential for healthy ecosystems,” notes National Wildlife Federation Chief Scientist Bruce Stein. “They play critical roles in the food web and are key to keeping populations of their prey in check.”

And many of those same unloved animals are in trouble. A host of insect species are suffering major population declines, with incalculable effects. Snakes are important as both predators and prey wherever they live, yet the reptiles now face a deadly fungus reminiscent of the one that has killed millions of amphibians during the past 20 years. Bats are vital pollinators, seed spreaders and predators of flying pests. Their numbers, too, are dropping due to fungal disease, habitat destruction and other threats. 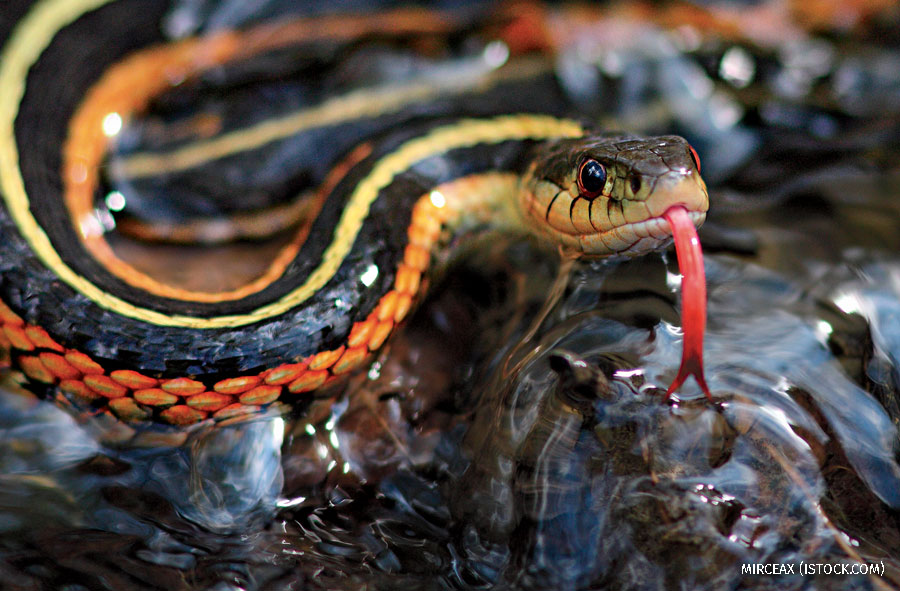 Still, the roots of our negative feelings run deep. Disgust evolved to protect us from pathogens and parasites. Things that might infest or carry disease or that have a trait that suggests sickness or death—a slimy texture or funky smell, for example—often gross us out. Like many mammals, we will scrunch up our noses, curl up a lip and back away.

Studies have shown that the brains of nonhuman primates evolved to rapidly detect snake-shaped objects—an adaptation to the genuine threat snakes can pose. It’s not surprising that such attentiveness also occurs in people. In a study of human six-month-olds, pictures of snakes and spiders elicited a stronger physiological response—specifically, pupil dilation—than did pictures of similarly sized and colored fish and flowers. But that reaction does not necessarily indicate innate fear. “It doesn’t tell us they are afraid or recognize danger per se,” says University of Vienna neuroscientist Stefanie Hoehl, who ran the study with colleagues at Uppsala University. Instead, enhanced instinctive attention to certain stimuli may offer humans, like our nonhuman primate kin, a head start on a quick, life-saving response. 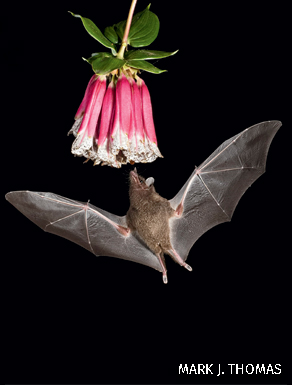 But it’s primarily social experiences (your brother put a spider in your bed when you were eight) and cultural cues (think of movies such as Arachnophobia and Snakes on a Plane) that turn such attentiveness to anxiety, studies suggest. Kids especially pick up on others’ fears. “Even if you have children fascinated by the ‘yuck factor’ of creepy-crawlies,” parents who are hesitant to interact may incline kids to become wary as well, notes Harvey Lemelin, a social scientist at Ontario’s Lakehead University. But when adults are open-minded and curious, that can rub off, too. “Research has demonstrated that people’s perspectives towards wildlife are malleable,” Lemelin says. “It’s never too late to correct bad impressions.” Introducing kids (and anxious adults) to the cool characteristics of particular animals can help guide them away from fear and disgust.

Positive hands-on exposure can yield even more dramatic changes. In one study of more than 500 schoolchildren, learning about—and especially touching—nonvenomous snakes had a significant impact on the kids’ feelings about snakes in general. After their experience, the vast majority expressed a liking for snakes and a desire to protect them. “I think there’s a level of familiarity that diminishes fear,” Lockwood says, “and that can help us reclaim the ability to distinguish between what’s dangerous and what’s not.”

Still, let’s be honest: Loathing is a hard habit to break. But at least we can protect the habitats that even viscerally unpopular species depend on—and try to leave them be. “Maybe we can’t expect that everyone will love all creatures great and small,” Lockwood says. “But how about just stop killing them on purpose? If we treat them as worthy others and stop the intentional acts of destruction, that would be huge progress.”

Ssssssssssservice Animals »
Blog: 10 Reasons You Should Love Bats »
Blog: Should You Be Sacred of These Three Creepy Creatures? »