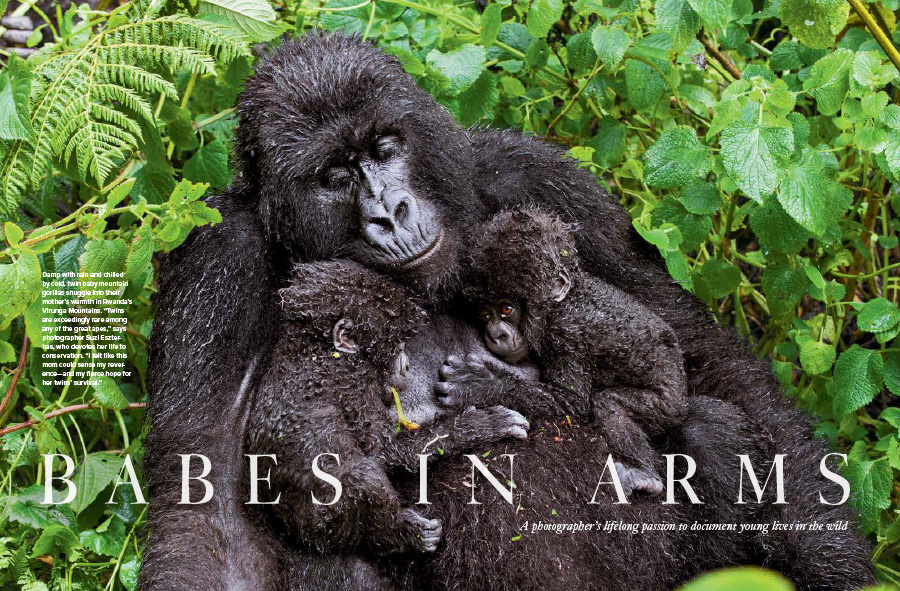 Damp with rain and chilled by cold, twin baby mountain gorillas snuggle into their mother’s warmth in Rwanda’s Virunga Mountains. “Twins are exceedingly rare among any of the great apes,” says photographer Suzi Eszterhas, who devotes her life to conservation. “I felt like this mom could sense my reverence—and my fierce hope for her twins’ survival.” (Photo by Suzi Eszterhas)

OBSESSED WITH BABY ANIMALS SINCE CHILDHOOD, photographer Suzi Eszterhas has devoted her 20-year career to documenting the lives of newborns and their parents in the wild across all seven continents, often focusing on the planet’s most endangered species. These images from her latest book, New on Earth, hint at the variety and intimacy of her subjects. But why focus on babies?

“I’ve always been drawn to vulnerability and innocence,” she says. In addition, “‘cute’ has incredible power to arouse compassion and love”—and inspire conservation.

Dedicated to saving species, Eszterhas donates proceeds from her work to the conservation of sloths, cheetahs, Sumatran orangutans and many other creatures. But creating that work ethically without disturbing her subjects is challenging. Building trust with animals is “the real work,” says Eszterhas, who spends years learning about their behaviors and documenting their lives in the wild, where respect is more important than the camera. “Animals can feel your energy,” she says. Though species declines dishearten her, “working with baby animals gives me hope,” she says. “New generations need our protection.... Every new life truly matters.” 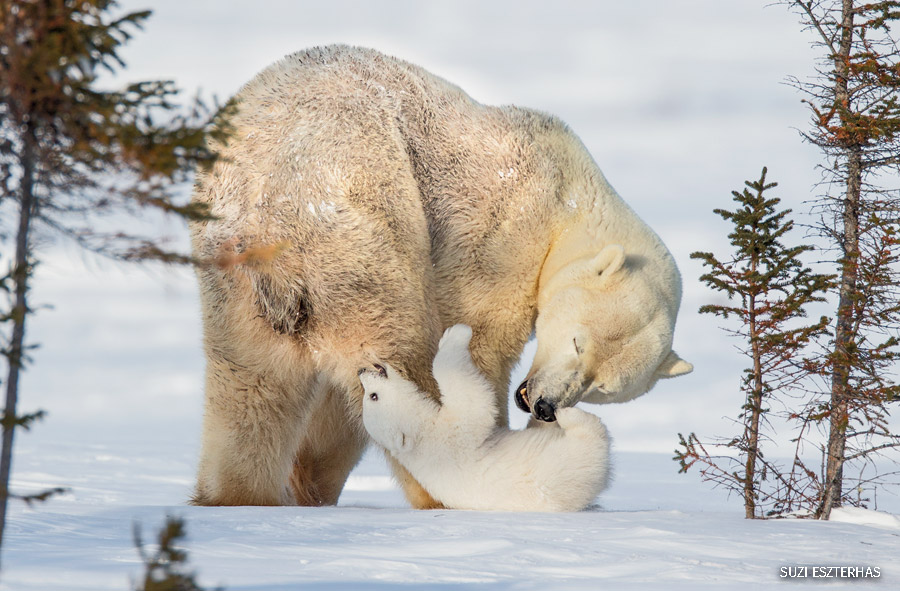 Polar Bear
After emerging from their nearby den, a polar bear mother helps her young cub acclimate to its new world above the snow. “Cubs begin to get used to the light and build muscle by running and playing,” says Eszterhas. “They often get rambunctious and do naughty things like biting mom, and she’s not thrilled about it at all. But like many mothers, polar bears are very tolerant and obliging, especially when it comes to play.” 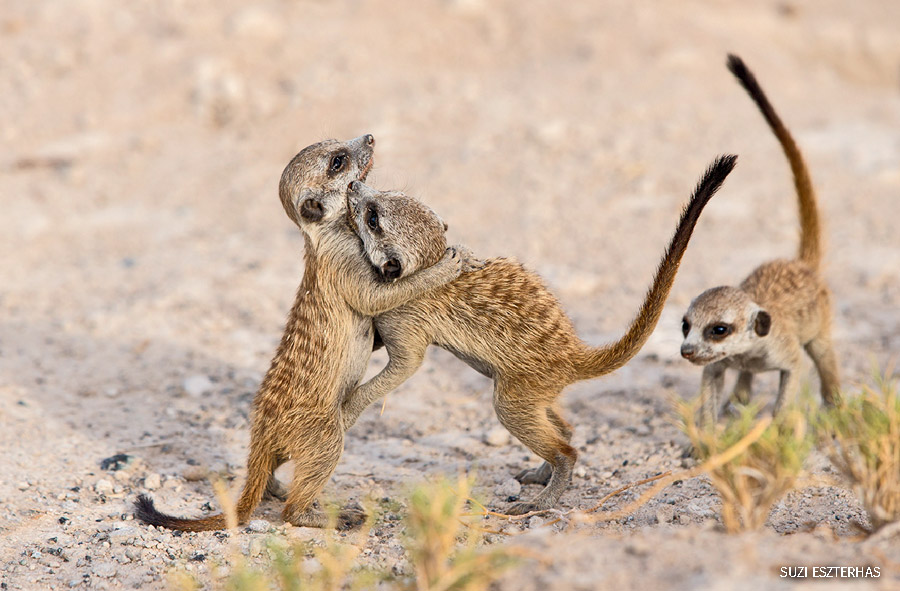 Meerkat
They may look adorable, but “meerkats are some of the fiercest animals on Earth,” says Eszterhas, who spent weeks documenting the mammals in Botswana. These 6-week-old pups are play fighting, “practicing for serious fights they’ll have as adults, either to defend territory or show dominance.” Though fierce, meerkats are also very protective of their family groups, with adults sharing child care and sounding alarms to warn of potential danger. 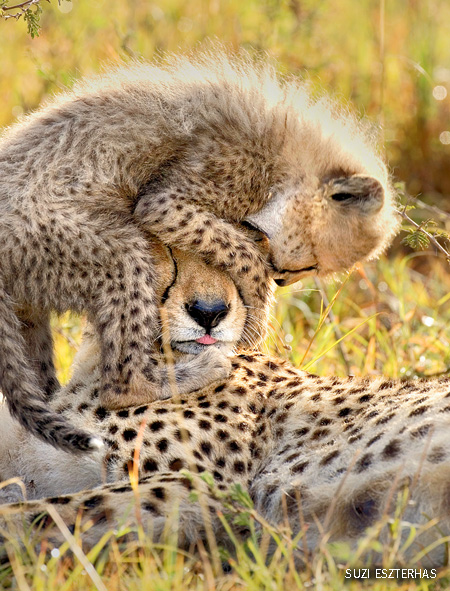 Cheetah
“Cheetahs are one of my first loves,” says Eszterhas, who spent three years camping in Kenya’s Maasai Mara to document cheetah families in the wild. “Babies are excessively playful and love to pounce on mom’s head”—just like this 6-week-old cub—“and the mothers are pure tolerance.” Such antics build muscle and coordination, but Eszterhas also believes the contact is emotional. “I’ve seen so much joy in baby animal play.” 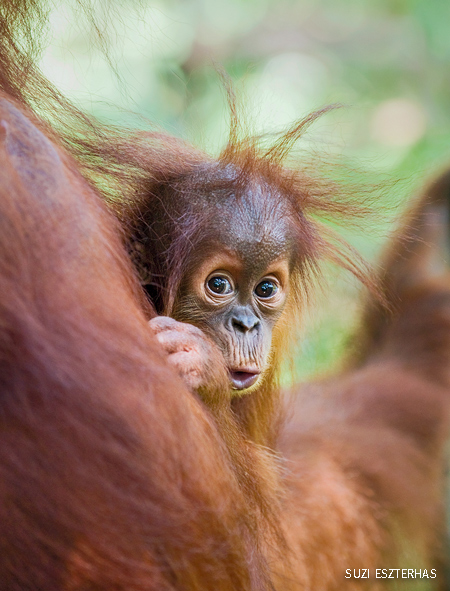 Orangutan
“Some baby orangutans living in Sumatra’s Gunung Leuser National Park are the wild-born offspring of mothers rescued from the illegal wildlife trade,” says Eszterhas. Critically endangered due to deforestation for the palm oil trade, orangutans hold a special place in her heart, as does this endearing portrait of a 9 month old having a “quintessential baby orangutan bad hair day—sweaty tufts sticking out in all directions.” 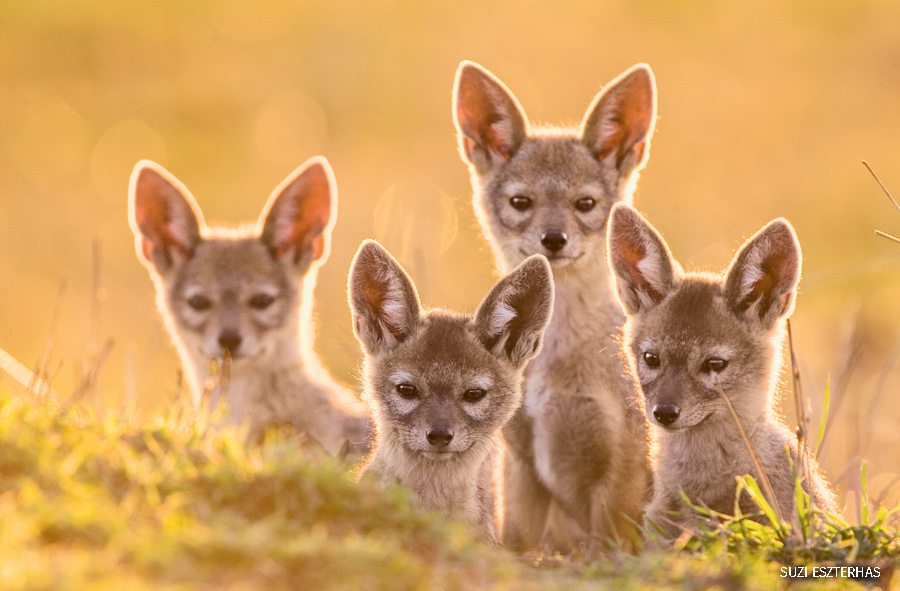 Jackal
Four jackal pups pop up from their den to glance across the Kenyan savanna. Deeply shy animals unaccustomed to humans, they were “extremely challenging” subjects, says Eszterhas. To gain their trust, she approached very slowly over 17 days, inching forward each day and spending 14 hours at a stretch just watching and clicking her shutter to get them used to the noise. “Trust is fragile,” she says. “If you mess it up, they are unforgiving.” 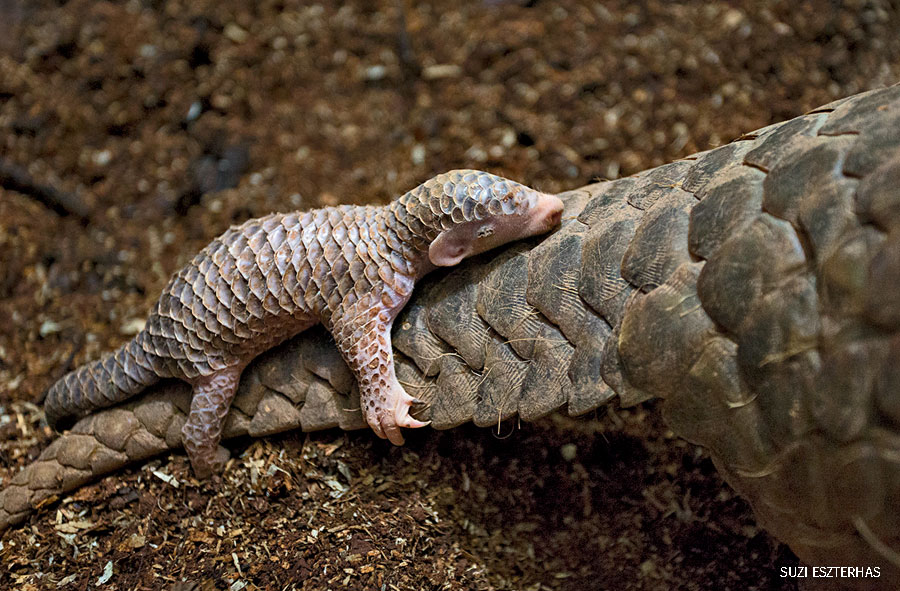 Pangolin
Born in Taiwan’s Taipei Zoo as part of a captive-breeding program to save critically endangered Chinese pangolins, a 2-week-old baby clings to the tail of its mother, which had been rescued from poachers. “To me, pangolins are the epitome of vulnerability, decimated by humans” who covet their scales for medicine, says Eszterhas. “Their only defense is to curl into a ball. If that doesn’t deserve empathy, I don’t know what does.” 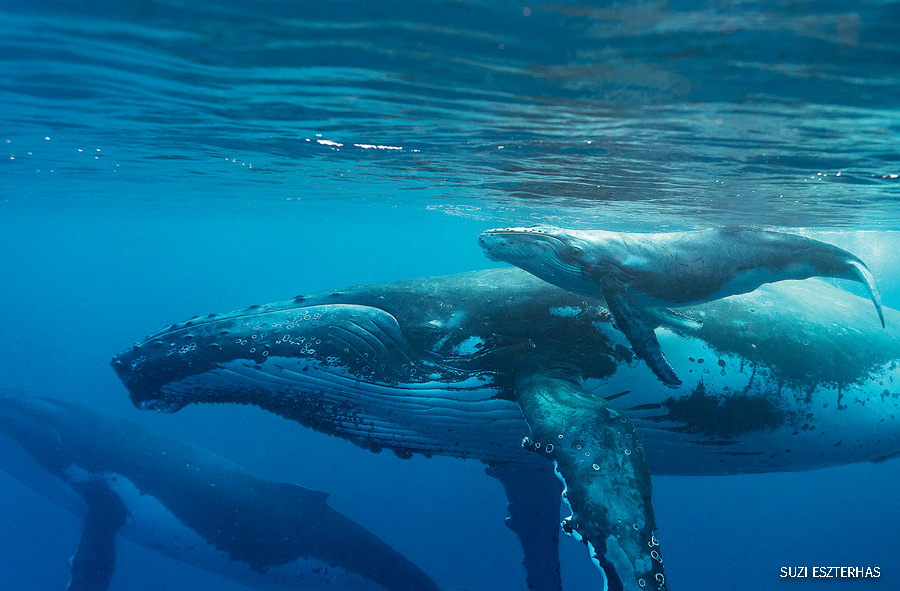 Humpback Whale
Inside a calm cove off the island of Tonga, a newborn humpback whale calf—locally known as a “freshy”—sticks close to its mother while an escort swims nearby to ward off potential predatory orcas. “Being out of my element, swimming with these massive animals, I felt so tiny,” says Eszterhas. Despite their size and power, humpbacks are “incredibly peaceful and friendly,” she adds. “This experience was deeply humbling, even spiritual.” 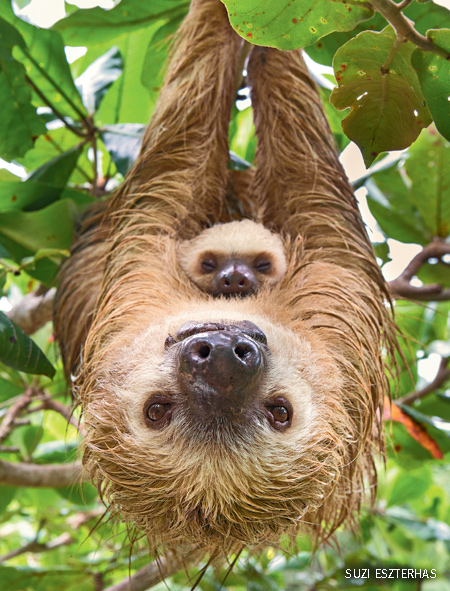 Sloth
After their birth tree was felled by loggers, this Hoffman’s two-toed sloth and her baby were rescued then released into a wild area in Costa Rica that’s protected from deforestation. Shortly after their release, Eszterhas climbed up to photograph them. Babies stick to their moms “like Velcro,” she says. Admitting to a “major love affair with sloths,” Eszterhas has covered five of the six species and helps fund their conservation—a true labor of love.