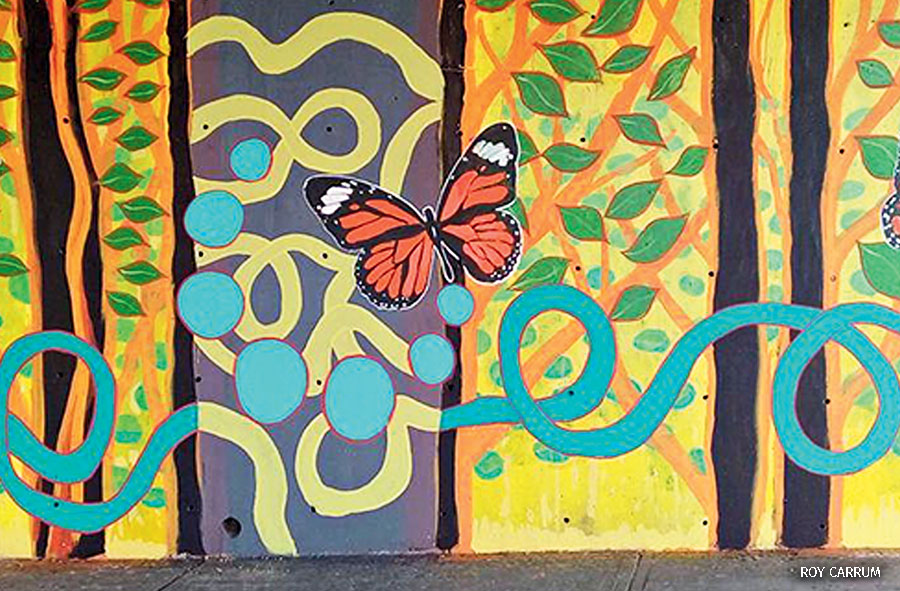 In Saltillo (above), a mural honors Rocío Treviño. Known as “the granny of the monarchs in Mexico,” she helped trace the insect’s migration route. Residents of Apodaca, Mexico (below) help create a monarch mural.

THE LIFE CYCLE AND MIGRATION of the monarch butterfly is one of the most celebrated of any pollinator species. Eastern monarchs breed in the Great Plains and across the central and eastern United States and southeastern Canada, and migrate south to central Mexico in late summer and fall. Their transnational migration connects many of us to this iconic species.

But the monarch is in trouble. Habitat loss, pesticides and the spread of nonnative plants have wiped out much of the continent’s native milkweed—the only food monarch caterpillars eat—causing significant declines in both the eastern and western monarch populations. To address this crisis, more than 600 mayors across the United States, Canada and Mexico have taken the National Wildlife Federation’s Mayors’ Monarch Pledge, committing to actions—such as planting native milkweed and nectar plants—that will help sustain the monarch butterfly for generations to come. 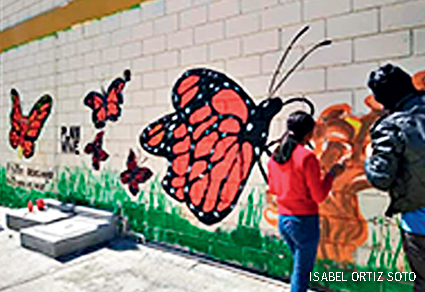 In Mexico, the Mayors’ Monarch Pledge program (known in Spanish as “Mi Municipio con la Monarca”) is run by NWF’s partner organization Profauna A.C.—a conservation organization dedicated to promoting biodiversity—through its Programa Correo Real. Since 2015, Correo Real and its partner organizations have worked with elementary schools and youth arts centers to paint 29 monarch murals across several cities in the Mexican states of Nuevo León and Coahuila.

Since the first mural was painted in 2015, dozens of schools and municipalities have fused the mission of monarch conservation with that of art and youth engagement. For example, Profauna A.C. partnered with the Manuel Rodríguez Vizcarra Kindergarten in Apodaca to help students, parents, teachers and faculty create a mural named “Soy Monarca” (“I Am a Monarch”) on school grounds. Engaging students through art and creativity, the project helped them learn about wildlife in a fun, collaborative environment.

In 2017, the city of Saltillo in the Mexican state of Coahuila created a mural that was a tribute to Rocío Treviño, known as “the granny of the monarchs in Mexico.” Treviño coordinated Profauna’s Correo Real program for 28 years and is recognized as the woman who managed to trace, with the help of hundreds of volunteers, the migratory route of the monarch butterfly in Mexico.

The Office of Urban Art, Culture and Youth in Apodaca, in the state of Nuevo León, and the elementary school Héroes de la Independencia in Apodaca have organized multiple successful youth programs that raise awareness of the monarch butterfly and its epic migration. Dozens of students have been directly involved in designing and painting murals at the school, community centers and public squares.

“Our students and professors are committed to work for the environment and the preservation of the monarch butterfly,” says Leslie Azucena Gutiérrez, principal of the Héroes de la Independencia school. “Teachers, parents and students work together to plan projects, and one of the many projects includes murals that give life and color to our schools. We have found an excellent way to spread the love for the environment.”

Abel Zacarías Rodríguez Chapa, coordinator of the Office of Urban Art, Culture and Youth in Apodaca, says his office supports murals because “we are committed to the development of young talent through the Express-Art program.” This program, he says, “provides material, space and training for the promotion of culture and urban art.” Murals help beautify and rehabilitate spaces “for the good of the community,” he adds, “reflecting positive messages such as inclusivity [and] allowing the greatest number of people to appreciate quality works of art.”

As vivid as the butterflies they celebrate, young people gather at a monarch festival in McAllen, Texas—the second U.S. city to sign NWF’s Mayors’ Monarch Pledge.

Monarchs and neotropical birds share many of the same migratory pathways across the U.S.–Mexico border—and face many of the same challenges finding suitable habitat. To create stepping stones of healthy habitat along migration routes, NWF’s Climate-Resilient Habitats program and many local partners—including the Quinta Mazatlan World Birding Center in McAllen, Texas—are restoring 150 acres of native habitat in urban areas and along roadsides of the Lower Rio Grande Valley.

The Federation is also supporting creation of a monarch-themed mural at the Quinta Mazatlan World Birding Center to showcase habitat restoration and celebrate monarch migration. Due for completion in 2022, the mural will be called Destino Monarca, reflecting the name of the Lower Rio Grande Valley’s Monarch Conservation Plan. Through such efforts, the monarch butterfly may continue to soar well into the future.

Art of the Possible »
Peril at Journey's End »
Blog: Celebrating the Monarch Butterfly in Mexico »