Bugs in the System

Spotted lanternflies are eating their way across America 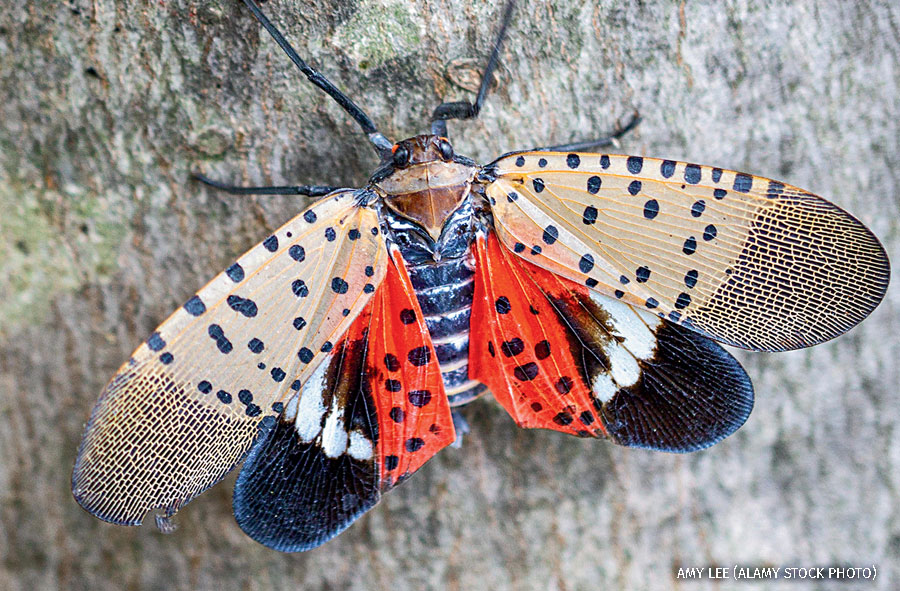 Stunning with wings unfurled (above), lanternflies multiply quickly (below).

NEITHER A FLY, AS ITS NAME IMPLIES, nor a moth, which it resembles, the invasive spotted lanternfly is a beautiful bug—but a very bad one, at least in the United States. What to do if you see one? “Kill it! Squash it, smash it … just get rid of it,” advises a Pennsylvania Department of Agriculture alert.

Native to Asia, the lanternfly, a planthopper, was first reported on this continent in 2014 in Pennsylvania. By late 2021, it was established in 10 U.S. states and had been sighted in 10 more—a list that keeps growing, says Julie Urban, a Pennsylvania State University evolutionary biologist who has studied the species for two decades. 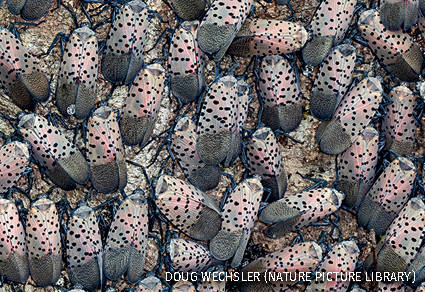 Some secrets to its success: “Unlike most sap-feeding insects, the lanternfly doesn’t lay eggs only on a handful of host plants,” says Urban. The insect, in fact, deposits egg masses—each containing 30 to 50 eggs—on “virtually anything,” she adds, including automobiles, train cars, shipping crates and airplanes. Another adaptive trait, lanternflies thrive on more than 100 plant species, including valuable crops. According to a 2019 study, the pest could cause annual losses of $325 million in Pennsylvania, where it already is costing farmers tens of millions a year, mainly by killing grapevines.

Even if it doesn’t kill its host, the pest produces copious quantities of a sticky liquid called honeydew as it feeds, which “can make it feel like it’s raining on a sunny day if you’re picnicking under a tree,” says University of Maryland entomologist Michael Raupp. Honeydew also fosters growth of a black mold that can block sunlight and inhibit photosynthesis.

Scientists are fighting back on all fronts—from traps and quarantines to researching targeted insecticides and imports from Asia of tiny wasps that parasitize lanternfly nymphs. But we also need to look to native natural enemies, says Raupp, who reports that mantids, assassin bugs and spiders already are gobbling up lanternflies.

So are birds. For her Ph.D. research at Penn State, biologist Anne Johnson compiled reports of 63 species preying on the pests, including jays, catbirds and cardinals. But noting that lanternflies—like monarch butterflies and other distasteful insects—sport bright colors and black patterns, she wondered if the bug might pick up chemical defenses from its favorite food: tree of heaven, another Asian invader. In an experiment, she found that birds offered suet laced with lanternflies that had fed on tree of heaven and those that had not indeed chose the latter. Removing tree of heaven, already recommended to slow the pest’s spread, “may also bring more avian predators into play,” Johnson says.

Space Invaders »
A Downward Spiral »
Too Much Wiggle Room »