Eavesdropping on an Elusive Cat 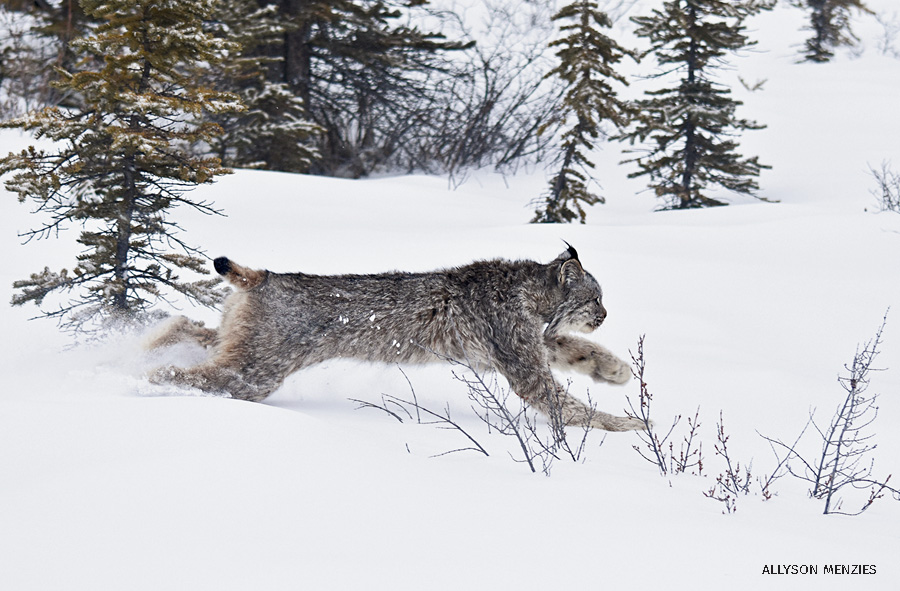 In Canada’s Yukon, a trapped and tagged Canada lynx (below) awaits release and another runs toward freedom (above).

THE FOREST HAS EYES—the eyes of a creature so solitary it’s rarely seen in the wild, even by the biologists who study it. Somewhere in the shadows of a winter dusk that falls over Kluane Wildlife Sanctuary in Canada’s Yukon, those eyes are watching—and they belong to the Canada lynx.

This elusive boreal forest wild cat ranges across Canada, Alaska and northern areas of the contiguous United States, easily navigating deep snow on its snowshoelike paws as it hunts for its main prey, snowshoe hares. Now, researchers have devised a way of spying on this furtive species, even recording sounds of the hunt.

“Observing animals in the wild, especially those like lynx that roam across vast landscapes, is extremely challenging,” says wildlife ecologist Emily Studd of the University of Toronto–Mississauga. “We had to resort to sneakier ways,” including “spy microphones”—acoustic recorders attached to GPS collars—and the equivalent of Fitbits for lynx, called accelerometers, which track the cat’s speed and distance. 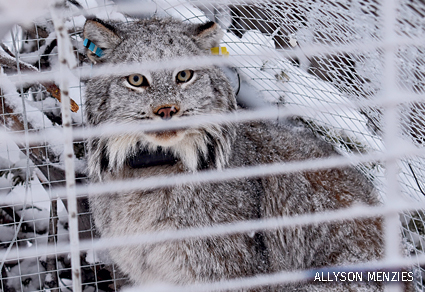 Over five winters from 2015 to 2020, Studd and her colleagues—Allyson Menzies of the University of Guelph and Rachael Derbyshire of Trent University—livetrapped Canada lynx in southwestern Yukon. The team used custom-made box traps baited with roadkill, scented with essence of skunk and lined with what the scientists call visual attractants: tinsel and compact discs, which glint in sunlight. The lures worked, allowing the team to trap 131 adult lynx—60 distinct individuals.

The team sedated the cats to weigh them and take blood samples, then fitted them with GPS collars and accelerometers. Twenty-six individuals got acoustic recorders. “When we figured out how to attach a small microphone to our lynx collars,” says Studd, “it opened a whole new world.”

Much to the researchers’ initial surprise, “these recorders were very effective at capturing the behavior of the lynx,” Studd says. “We were able to listen in on cats being cats.” The devices caught the lynx grooming, sleeping, purring and growling. They also captured hunting behavior—chases, kills and feeding on prey—which the team believes are the first audio recordings of hunting behavior in a terrestrial mammal.

In the study area, lynx densities range from 2.3 to 36.7 cats per 100 square kilometers. Lynx reproduction syncs with that of their hare prey. Snowshoe hare numbers peak every 10 years, with lynx numbers reaching highs a year or so later. In 2022, the hare-lynx cycle was at its low end.

The findings, she believes, will benefit conservation efforts for Canada lynx, listed as threatened in the Lower 48 under the Endangered Species Act. In Canada, lynx are designated “not at risk” by the Committee on the Status of Endangered Wildlife in Canada, but they face growing competition from coyotes spreading north as the climate warms. 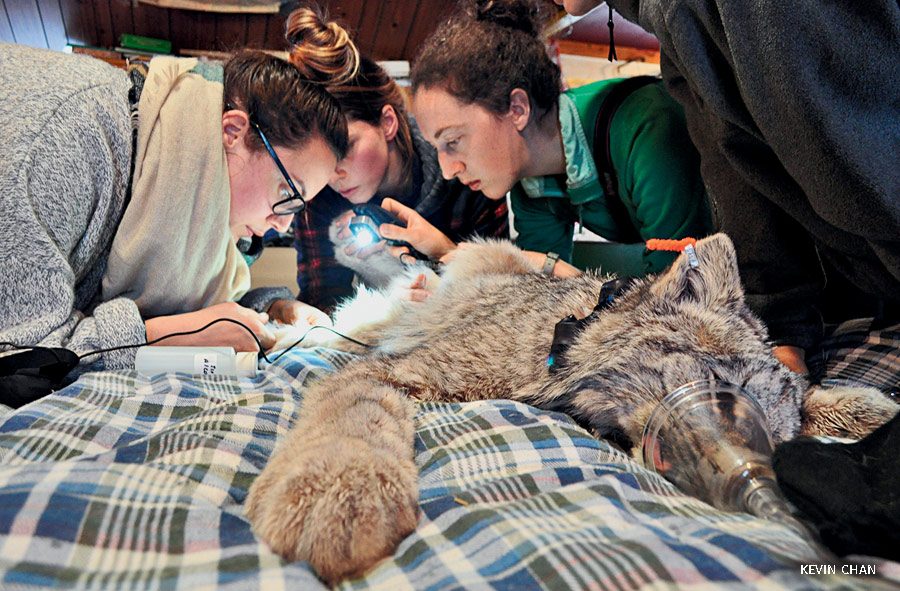 In five years of study, the biologists amassed more than 14,000 hours of audio recordings from 26 individual lynx and were able to identify prey kills with 87 percent accuracy. Before the new method, confirming a single kill required hours of snowshoeing and tracking in the Yukon’s short winter days. “By recording the lynx, we could collect information 24 hours a day,” says Studd, “while we warmed our feet by a wood stove.”

As the scientists discovered, the “soundscape”—the combination of sounds in an environment—of a Canada lynx’s life is not exactly idyllic. “We recorded chases, screams of prey as they were caught, calls of prey as they escaped and bones crunching,” says Studd.

For each prey chase, the researchers documented the sprint’s duration, which ranged from one to 39 seconds, and the prey species based on vocalizations. “Chases were successful if feeding was heard within 10 minutes, or the sounds of the chase ended in a death-associated vocalization of the prey,” the biologists write in the journal Methods in Ecology and Evolution. In other words, the “death rattle” was heard when chewing sounds were recorded within 10 minutes of lynx triumphs with no subsequent chases, which happened 91 percent of the time.

“For all feeding events,” Studd and her colleagues state, “we recorded prey type (prey vocalization), feeding duration and whether the event was a new kill (preceded by a chase), a stolen kill (preceded by vocalizations of other predators and no chase) or scavenging (no chase or lynx vocalizations).” The researchers labeled a series of audio clips as a feeding event when there were more than 6.25 minutes of chewing in a 10-minute window of time.

Lynx eat an average of 1.2 large prey items each day, the study shows. The kills were snowshoe hares 70 percent to 100 percent of the time, depending on the individual lynx, with red squirrels making up 0 percent to 27 percent of lynx lunches. 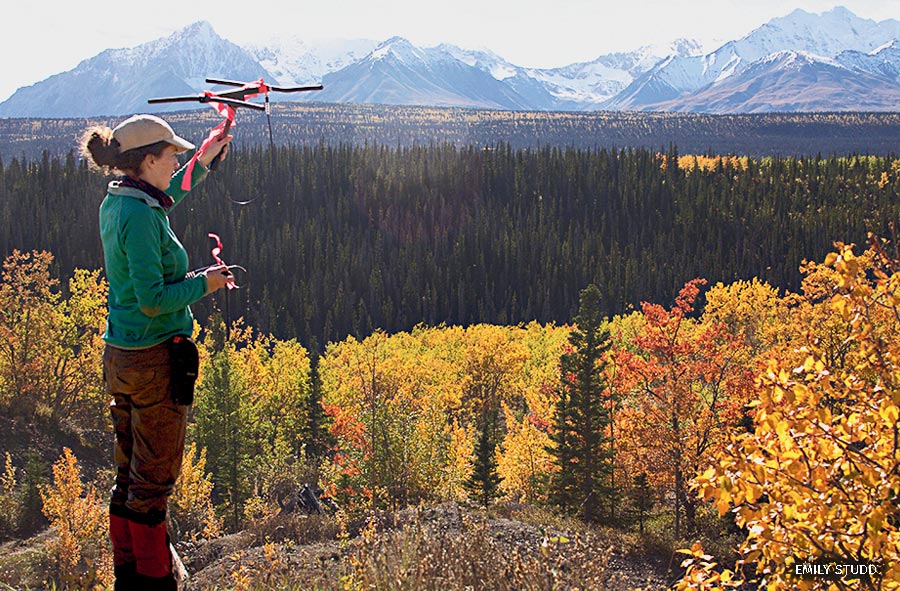 Researcher Emily Studd holds a receiver to check the location of cats collared with accelerometers, which provide data on the cats’ speed and distance.

For such solitary animals, lynx were more social than the biologists expected. “Many of our collared lynx, especially adult females, appeared to interact extensively with each other in groups of two to three,” the authors write, “sleeping, grooming, traveling and even hunting side by side.”

In the usually solo world of the lynx, however, the line ends there. The cats apparently don’t share their prey. After a kill, the researchers heard growling and snarling, possibly a warding off of feeding attempts by other lynx.

Wildlife biologist Jim Williams, author of Path of the Puma: The Remarkable Resilience of the Mountain Lion, thinks the new technique will also be helpful in studies of other cat species. “This technology will refine our understanding of wild felid predation ecology,” says Williams, “For pumas in particular, the audio data from bone-crunching would probably be quite identifiable and loud.”

Despite the new revelations, the Canada lynx, known to some Indigenous Peoples as the “keeper of secrets,” still roams largely incognito.

Cheryl Lyn Dybas wrote about life under snow in the February–March 2021 issue.