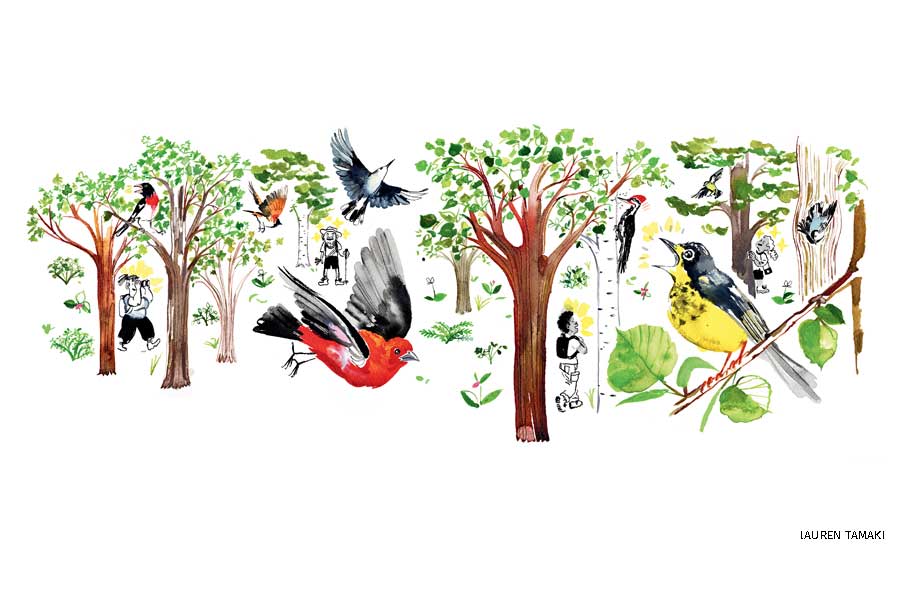 FOR AS LONG AS SHE CAN REMEMBER, Danielle Ferraro has been captivated by birds. “Just seeing them or hearing them sing makes me happy,” says the Colorado State University wildlife biologist. Her feelings are not surprising. In recent years, scientists have gathered extensive evidence that spending time in nature positively affects people’s emotional and physical health. Three years ago, Ferraro, then a biology graduate student at California Polytechnic State University, decided to investigate how birds, in particular, may play a role in producing such beneficial effects.

Focusing on the impact birdsong may have on a person’s sense of well-being, Ferraro and her colleagues played recordings of various avian species’ calls on two trails in a Colorado park for several weeks. They then interviewed hikers about their experiences walking the paths. Among their objectives, the researchers wanted to know if participants could discern changes in the number of different bird species singing.

They discovered that hikers who heard the recordings could indeed sense such changes in bird diversity. Those hikers also reported experiencing greater feelings of joy and pleasure than others who walked the same trails when the recorded calls were not playing. “Remarkably,” Ferraro says, “we found that even just 10 minutes of exposure to the recordings had very positive effects on people’s moods.”

Published in Proceedings of the Royal Society B, Ferraro’s paper is far from the only study finding that the presence of wild birds—particularly multiple bird species—can lift people’s spirits. In the first continent-wide analysis of its kind, German researchers, for example, poured through a massive European Quality of Life Survey for socioeconomic data on some 26,000 people in 26 countries. Based on information from the European Breeding Bird Atlas, they also tallied the number of avian species in various locations. “We found that Europeans are particularly satisfied with their lives if their immediate surroundings host high [bird] species diversity or if they live in near-natural surroundings that are home to many species,” says the study’s lead author, Joel Methorst, an ecologist at Helmut Schmidt University.

In a subsequent analysis of medical data provided by German authorities for 30,000 residents, Methorst and his colleagues confirmed that the larger the number of bird and plant species in a region, the more content people are. While they did not uncover a relationship between residents’ physical health and their experiences with birds, the researchers did find evidence of a link between the subjects’ mental health and their bird encounters. As a result, they emphasize in a 2021 report in Landscape and Urban Planning, preserving bird diversity is not only important for nature but also for human happiness.

A team of British scientists came to the same conclusion after surveying several hundred people of different ages, incomes and ethnicities about their mental health. The researchers learned that British residents living in neighborhoods with more birds active during the daytime, along with an abundance of foliage, are less likely to suffer from depression, anxiety and stress compared to people who live in areas with fewer birds and plants. Many residents said they enjoyed the same positive psychological benefits from bird-watching no matter what species they saw. Published in the journal BioScience, the study “starts to unpick the role that some key components of nature play for our mental well-being,” says University of Exeter researcher and lead author Daniel Cox. Birds living around homes—and nature in general—he adds, show great promise in preventative health care.

According to Ferraro, “There could be an evolutionary reason why so many of us get pleasure from hearing and seeing birds.” Human brains might be genetically attuned to enjoying nature, she suggests. “It could be our natural inclination.”

Based in California, Mark Wexler is a frequent contributor.