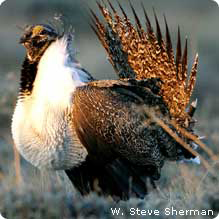 The U.S. Fish and Wildlife Service's decision to give state and federal conservation efforts an opportunity to save the greater sage grouse and its habitat is the right decision for the grouse, the hundreds of other species of the sagebrush steppe and the sportsmen, wildlife enthusiasts, ranchers and local economies that depend on this Western landscape.

Collin O’Mara, president and CEO of the National Wildlife Federation, attended Tuesday’s announcement at the Rocky Mountain Arsenal National Wildlife Refuge near Denver during which federal officials said the greater sage grouse won’t need the protections of the Endangered Species Act because of the safeguards in state and federal conservation plans and work by private landowners.

"What’s good for the bird is good for the herd—and today’s decision will help rebuild greater sage grouse populations and conserve sagebrush habitat that supports more than 300 species, including pronghorn, mule deer, and elk.  This decision illustrates what the Endangered Species Act is supposed to be all about: galvanizing collaborative efforts to save wildlife species before they’re on the brink of extinction," O’Mara said. "It follows years of work by private landowners, ranchers, sportsmen, conservationists, industry, and state and federal agencies to develop achievable conservation plans based upon sound science, which, when implemented with sufficient resources and adjusted as needed, provide a blueprint for sustaining healthy wildlife populations and habitats across the West. It’s a good day for all sportsmen and outdoor enthusiasts.

"The campaign to save the greater sage grouse is an unprecedented collaboration in its geographic scope – 11 Western states – and the diverse parties involved, including governors from both parties, federal and state agencies, sportsmen and women, private landowners, ranchers, conservationists, industry groups, and outdoor recreationists,” O’ Mara added. “The National Wildlife Federation, with its 6 million members and supporters and its state affiliates, will push to ensure this crucial work is implemented effectively and will oppose attempts in Congress to derail these efforts to save an iconic species and landscape."

Here is what NWF affiliates in the West are saying about the Fish and Wildlife’s decision:

"After the decision by the U.S. Fish and Wildlife Service not to list greater sage grouse, maybe we can take some time to appreciate the efforts that enabled the agency to reach this point. Private landowners, ranchers, sportsmen, state and federal officials, outdoor enthusiasts and wildlife advocates have been part of the endeavor to save the bird and its habitat," said Janet Marschner, Wyoming Wildlife Federation board member. "We in Wyoming, with all the work by the state and many stakeholders, helped blaze a trail for the many steps to come in the conservation journey ahead."

"The last several years, we’ve seen people across the political and social spectrum working together to save sage grouse and the Western sagebrush lands that are important to ranchers, sportsmen and women and the people who recreate there. Now comes the hard part: making sure the state and federal sage grouse conservation plans are carried out so we can save greater sage grouse, the habitat and see that the work done so far pays off," said Michael Gibson, Idaho Wildlife Federation executive director.

"The current debates about who should control Western public lands have played up the region's divisions. The campaign to save two Western icons – the greater sage grouse and the sagebrush steppe – has shown collaboration is possible even when the Endangered Species Act, private property, the economy and different layers of government are involved,” said Suzanne O’Neill, Colorado Wildlife Federation Executive Director. "If we stay on track and sage grouse populations rebound, maybe a chicken-sized bird known for its flashy mating dance will become a symbol of what's possible when we search for common ground."

"Over the last few years, Montanans from all walks of life have worked together to protect sage-grouse habitat on public and private land.  Today's decision demonstrates that when we roll up our sleeves and put aside politics, we can preserve both Montana's wildlife and our working farms and ranches.  Now we need to dedicate ourselves to fully implementing these protections and recovering this important species for future generations," said Dave Chadwick, Montana Wildlife Federation director.

Read more about greater sage-grouse and NWF’s support for conserving the bird and sagebrush lands.