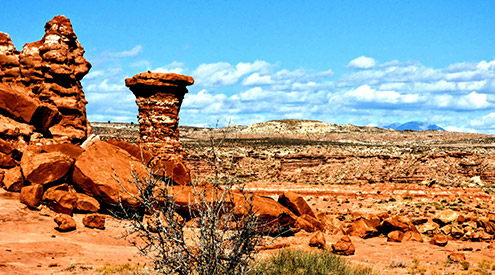 WASHINGTON, DC  – The National Wildlife Federation condemned today’s announcement that the Trump administration intends to shrink and divide up two Utah national monuments as an attack on our public lands legacy that must not stand.

“The Trump administration’s attempt to remove conservation protections for the vast majority of Bears Ears and Grand Staircase-Escalante national monuments is the largest single attack in history on our nation’s conservation heritage.

“For the past 80 years, the National Wildlife Federation has worked with presidents of both parties to conserve America’s treasured landscapes. No president has broken this bipartisan conservation covenant of building upon the conservation achievements of his predecessor— until today. The only other significant removal of protections occurred a century ago when President Woodrow Wilson sought to allow more timber harvest from Mount Olympus National Monument during World War I. Today’s action, far from being done for national security reasons, is intended to open more public lands to coal and uranium mining and oil and gas drilling at a time when roughly 14 million acres of land under oil and gas leases sit idle and coal leases are going for cents on the dollar.

“And while our Federation is deeply concerned about the impacts of today’s action on wildlife populations and outdoor recreational opportunities, the most galling aspect of the decision is the blatant disregard for the Native American tribes, who have worked for 80 years to protect thousands of years of critical cultural artifacts and sacred lands.

“The National Wildlife Federation stands resolute with our tribal partners and the overwhelming majority of Americans who are determined to fight what we believe is an illegal assault on our public lands heritage—and we will win.”