Mysteries of the Twilight Zone

Once dismissed as a biological wasteland, the deep sea teems with surprising life forms, most of them unknown to science 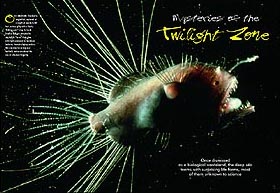 ODD CREATURE: This fanfin anglerfish, captured at a depth of nearly 5,000 feet, entices prey with a fleshy "fishing pole" atop its head. Smaller fish are attracted to anglerfish "lures" that glow with light produced by luminous bacteria. Female anglers such as this one may be as big as a football; males are about the size of a human fingertip.

A COLORLESS, FACELESS animal that lives rooted to a rock wall and, like a Venus's-fly trap, eats by snapping its "mouth" around passing prey. A fish with a "fishing pole" atop its head, baited by a lure glowing with light produced by bacteria. A gelatinous sea monster that gets dinner by unfurling a giant net of stinging tentacles; no fatter than a broomstick, it grows longer than a blue whale. All three creatures come from an alien world--one that exists on Earth in a deep-sea canyon less than ten miles from where tourists shop and sip latte in Monterey, California.

Deep-sea ecosystems such as Monterey Bay's two-mile-deep canyon make up the single largest environment for life on Earth--more than 90 percent of the planet's entire living space. Yet most of this vast realm is a mystery. "The deep sea is by far the least explored habitat in the world," says Laurence Madin, senior scientist at the Woods Hole Oceanographic Institution in Massachusetts. Today, however, Madin and other scientists, armed with new tools such as manned and unmanned submersibles, are beginning to unlock some of the secrets of this underwater twilight zone. Their most surprising finding is that the deep sea, once considered a biological wasteland, teems with both an abundance and diversity of living things, many of them so strange they might have been plucked from the pages of science fiction.

Until the mid-nineteenth century, scientists believed that conditions in the deep sea were too harsh to support any life at all. Indeed, with an average depth of about 12,000 feet, this zone is characterized by extremes of darkness, high pressure and cold that could not be tolerated by either terrestrial or shallow-water animals. But deep-sea creatures have evolved special traits to cope with their environment. These adaptations include large eyes that pick up slivers of light penetrating the inky blackness as well as an ability to produce their own light--called bioluminescence--which helps them avoid predators and attract both mates and prey. Aside from bottom dwellers, about 90 percent of all animals living below 300 feet generate light for at least one of these purposes.

In addition to harsh physical conditions, deep-sea animals face another daunting challenge: scarcity of food. Unlike most ecosystems, which are made up of both plants (producers) and animals (consumers), deep-ocean habitats are too dark to support the plants that trap and pass on solar energy, through photosynthesis, to the rest of the system. Instead, most creatures rely on bits and pieces of organic matter--marine snow--that rain down from productive surface waters above. Some species commute thousands of feet up and down the water column every day, feeding in shallower water at night and returning to the depths by morning. Biologists believe these vertical commutes may represent the greatest mass migration of animals on Earth. 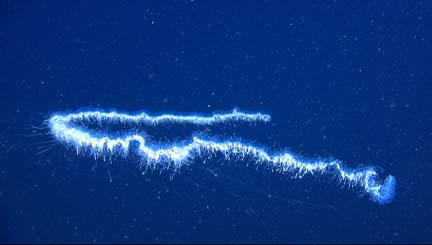 DEEP FEEDING: Gelatinous siphonophores, which may be Earth's most abundant predators, capture fish and other prey by unfurling curtains of stinging tentacles; thin as a broomstick, the largest grow longer than blue whales.

Given the deep sea's dearth of food, marine biologists were amazed to discover that it supports an extraordinary diversity of animal life--perhaps as many as ten million species, most of them still unidentified by science. "The deep ocean is home to species diversity much, much higher than any of us imagined," says marine biologist and deep-sea explorer Robert Hessler of the Scripps Institution of Oceanography in California.

Particularly surprising has been the number and variety of species discovered in the deep ocean's midwater zone, a region that extends roughly from about 1,000 feet below the surface to just above the seafloor. Many of these creatures are soft and gelatinous, from transparent squid, octopuses and jellyfish to large colonial animals called siphonophores. Growing to a length of 160 feet or more, one siphonophore, Praya dubia, may be the world's longest animal.

Because such fragile creatures are destroyed by trawl nets--unlike fish, which are more easily collected--scientists did not even know most of them existed until the advent of specially designed submersibles in the 1980s. According to pioneering midwater explorer Bruce Robison, a biologist at the Monterey Bay Aquarium Research Institute (MBARI) in Moss Landing, California, ignorance of these animals "meant that we probably underestimated the biomass of the sea by a third." The deep ocean's midwaters, he adds, "contain the largest animal communities on Earth." And within these communities, siphonophores rule, consuming so much food that they compete with big, hard-bodied carnivores such as sharks and whales. "It's the squishy, diaphanous fragile things that are knocking off the most prey," says Robison.

In addition to the surprising mass and variety of deep-sea life, one of the most revolutionary findings so far has been the discovery of entirely new ecosystems that are fueled by energy sources other than the sun. In Monterey Bay's submarine canyon, for example, clumps of clams and tube worms cluster around sulfide-emitting "cold seeps," gathering energy thanks to sulfide-eating bacteria housed within their bodies. Needing no other food, the worms lack digestive systems.

The most-celebrated deep-ocean habitats--seen for the first time about 100 miles off the Galýpagos Islands in 1977--are the hydrothermal vents now known to occur along deep, midocean ridges throughout the world. Vent ecosystems are created when water as hot as molten lead erupts through cracks in the seafloor. Laden with chemicals such as hydrogen sulfide--fed upon by bacteria that form the basis of food chains--these hot-water geysers support communities of extraordinary animals, including bright-red tube worms that grow more than three feet long.

Such species discoveries are both exciting and important, yet marine biologists still know virtually nothing about the life histories of most deep-sea creatures they've identified. A public exhibit at MBARI's sister institution, the Monterey Bay Aquarium, is now helping to change that, at least for a handful of species. To devise methods to capture and keep the exhibit's deep-sea animals alive at sea level--a world of light, pressure and temperature as alien to them as the deep ocean is to us--aquarium scientists had to learn much about the biology of their charges. One of their most interesting discoveries is the slow growth rate, and resulting longevity, of many deep-ocean animals. The researchers calculate that a mushroom soft coral, for example, will live at least 30 to 40 years; the life span of a deep-sea rockfish in the exhibit is estimated to be a century. 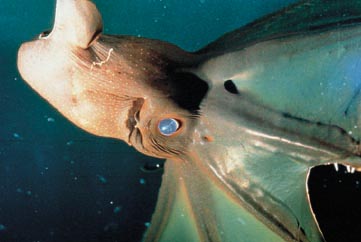 LIVING FOSSIL: The vampire squid belongs to an ancient evolutionary line that eventually split into modern-day octopuses and squid. "We don't yet know how far down they live, what they eat, who eats them or much about their behavior," says one marine biologist, reflecting how little is known about the majority of deep-sea creatures.

Mounting evidence for the longevity and slow growth of deep-sea creatures has some scientists worried about the animals' future. Recently, several industries, ranging from multinational mining companies to drug manufacturers, have begun turning to the deep ocean as a new source of potential profits. Last spring, for example, scientists announced that compounds extracted from deep-sea sponges of the Indo-Pacific were potent agents against malaria (and possibly TB and AIDS) in laboratory tests on mice. Their next challenge is to collect enough of the sponges to move on to human testing.

Meanwhile, commercial fishermen, who have depleted many shallow-water stocks, are using more advanced gear to harvest new species from deeper and deeper waters. Because deep-ocean fish grow slowly, are late to mature sexually and do not travel far, they are particularly vulnerable to overfishing. Populations of one such fish, New Zealand's orange roughy (which doesn't breed until its mid-twenties and can live more than 150 years), have fallen 97 percent since the mid-1980s.

Like tropical rain forests, the deep sea could lose many animal species before they're discovered by science. Marine biologists estimate that they've explored less than one percent of the deep ocean's massive territory. One limitation is the sheer expense of deep-sea exploration; one of MBARI's unmanned submersibles, ROV Ventana, is much cheaper than a manned sub, but still costs $8,000 a day to operate. Robison also suspects that the noise and bright lights of submersibles are scaring off many creatures even in well-explored zones. He says, "It's like driving a tractor trailer through the trees to study forest ecology."

Laura Tangley is a senior editor for this magazine.