Creating a Haven for Hummingbirds 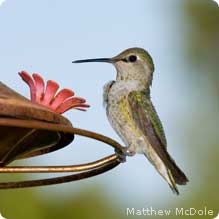 ON A HUMID MORNING IN OCTOBER, a bird bander named Rusty Trump reaches into a pull-string trap and lifts out a calliope hummingbird. This species, which summers in western mountain meadows and forests, normally migrates to Mexico in the fall. But this young male has been captured in a backyard in Augusta, Georgia.

Two other eastward migrating calliopes spent last Thanksgiving in a park on the northern tip of Manhattan. Green-breasted mangos—a tropical species of hummer—have been spotted at feeders in North Carolina and Texas. In central Colorado, master bander Brenda Wiard is trapping significantly greater numbers of black-chinned hummingbirds just outside of their normal range. And Anna's hummingbirds are showing up as far north as British Columbia.

What is going on in the world of hummingbirds? Some biologists believe global warming may be a factor, but no one knows exactly why these changes are occurring. Many hummingbird experts do agree, however, that there's never been a better time to try to entice one or more of the 21 species of hummers that range in this country into your backyard. Besides the possibility of helping provide information to researchers, you can also help these pioneering birds survive with feeders and flowers.

Start this fall by hanging a feeder. "They don't stop hummingbirds from migrating," says Bob Sargent, a master bander who maintains 55 feeders on his ten acres just north of Birmingham, Alabama. "Hummingbirds are programmed to move south when the days get shorter," he adds, "not when the food supply begins to dwindle." According to Sargent, a fall feeder will even help lingering hummers put on extra fat, which fuels them during their migration.

To prepare sugar water for a feeder, mix one part sugar to four parts boiling water. Never use honey or artificial sweetener. Both can cause a fungal infection in the birds. And Sargent says that the use of red dye is completely unnecessary and may be harmful to the hummers. You can, however, make extra sugar water and store the excess in the refrigerator for as long as two weeks.

Change the feeders sugar water frequently, even if no birds are visiting the site. The "nectar" can spoil quickly, sending a hummer away no matter how hungry it is. Replace the solution every five to seven days during the cooler months, and as often as every two days when summer temperatures remain above 90 degrees F. Rinse the feeder thoroughly—without soap—before refilling. Clean it once a month with a very mild, diluted bleach solution.

Another thing you can do to attract hummingbirds—indeed, perhaps the most important—is to add flowering plants to your yard. Sargent, who along with his wife Martha runs the nonprofit Hummer/Bird Study Group, points out that hummingbird habitat is being lost to development all across the United States and Canada. Backyard gardeners can help replace some of this disappearing habitat by creating hummingbird gardens.

When you begin to choose plants, think about when they will bloom. One of the keys to luring hummers to your yard, and keeping them coming, is to set out annuals and perennials with different blooming periods. By doing so, you'll be certain that there will be a steady supply of flowers in your yard from early spring until well into the fall. In warmer climates, some plants that bloom during the winter months will provide the birds with a year-round source of nectar.

You should also consider the color and shape of the flowers. Almost anything red and tubular is a favorite, according to Wiard. Pink and orange are also desirable, followed in descending order of preference by purple, blue and yellow blossoms. As a rule, the hummingbirds choose flowers that contain a lot of nectar and just a little fragrance.

Some excellent plants are native honeysuckles such as red honeysuckle and twinberry; most varieties of sages or salvia; many types of columbine including crimson, Canadian and western; and perennial penstemons such as scarlet bugler or firebird. Other good bets are bee balm or wild bergamot, cardinal flower, trumpet creeper, ocotillo, lupines, scarlet monkey flower and fire pink. Check with a local native plant society or your local nursery to determine which of these native plants will grow best in your part of the country. Natives require a lot less care compared to nonnative plants, and the birds generally evolved with them as well. What's more, native plants thrive without having to rely on pesticides and other potentially dangerous chemicals.

"Insecticides can be very harmful to hummingbirds," says Allen Chartier, a hummingbird researcher who bands the birds in Michigan and Ontario. "Most people think they feed exclusively on nectar, but this is not true. Hummingbirds feed their young almost entirely on small insects and only a little nectar." Also, the adults need regular doses of protein from mosquitoes, spiders, thrips, gnats and other arthropods to round out their diet. Some hummer aficionados even go so far as to hang an overripe melon or banana near one of their feeders to attract extra insects.

A constant source of water will complete your hummingbird haven. If you have a birdbath, place a couple of flat rocks in it to give the tiny birds an opportunity to bathe. Or add a drip fountain attachment, available at most garden centers. Running water seems to be a magnet to hummers—they will even fly through the spray of a sprinkler.

Once hummingbirds discover your garden, they apparently will remember it from year to year. Sometimes they even reappear on the same day. Bob Sargent has caught the same migrating rubythroat at the same feeder on the same day for four years in a row. "Hummingbirds seem to have a beautiful clock that runs," he explains, "putting them exactly where they're supposed to be on exactly the right day." With a little work on your part and a little luck, that spot could even be your backyard.