The Guru of Gnu

Richard Estes wrote the book on African mammals; now the zoologist is in the final stages of his definitive research on wildebeest of the Serengeti 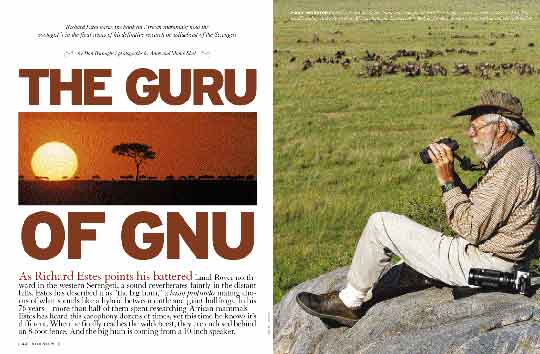 AS RICHARD ESTES POINTS his battered Land Rover northward in the western Serengeti, a sound reverberates faintly in the distant hills. Estes has described it as “the big hum,” a basso profundo mating chorus of what sounds like a hybrid between cattle and giant bullfrogs. In his 76 years—more than half of them spent researching African mammals—Estes has heard this cacophony dozens of times, yet this time he knows it’s different. When he finally reaches the wildebeest, they are enclosed behind an 8-foot fence. And the big hum is coming from a 10-inch speaker.

The world’s leading authority on wildebeest behavior, and on the behavior of large African mammals as a whole, Estes is in the midst of his last and most important research project: understanding the clock that sets the rhythm of the Serengeti—the wildebeest breeding cycle. Every February, give or take a couple of weeks, more than a million wildebeest, or gnus, gather in the southeastern quadrant of their quasi-circular migration route. There, amid the green flush of the short-grass plains, females give birth to some 500,000 calves, about half of them within a two-week window.

Such synchronicity, unparalleled among African mammals, is made possible only by an equally amazing trick eight months earlier, when hundreds of thousands of wildebeest cows strung out over hundreds of square miles come into estrus within an equally short period. But why do they all move to the same beat? Does the moon make them swoon, an idea advanced by some observers? Is it the love hum of rutting bulls, a theory first hypothesized by Estes 40 years ago? Or is it some other force? To solve the mystery, Estes has enlisted several scientific colleagues, the latest advances in molecular chemistry and 16 wildebeest cows. 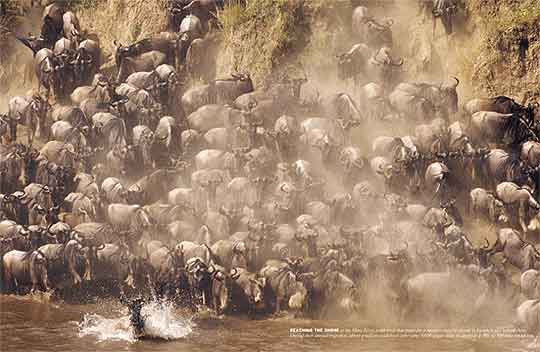 There is no doubt that the Serengeti belongs to the wildebeest. Add together all the elephants, warthogs, giraffes, gazelles, zebras, impalas, topis, lions and hyenas that live on these fertile plains and woodlands, and they still do not outnumber the humble gnu. With their teeth, hooves, dung and horns, wildebeest have literally cultivated these grasslands. Still, it is the lions, elephants and other charismatic mammals that are featured in coffee-table books. In the popular film The Lion King, wildebeest didn’t even get a speaking part.

Estes does speak for them. “They are my constituency,” he says. Today most of what’s known about wildebeest behavior is based on the observations of “the guru of gnu,” as he is called by Rod East, former cochair of the Antelope Specialist Group of the IUCN-World Conservation Union. Estes plans to spend the next few years writing the definitive tome on these bovids. “The wildebeest deserves its own book,” he says, “and if I don’t write it, no one will.”

From atop a granite koppie, we have a 360-degree panorama of wildebeest stretching out on an emerald carpet until they fade into black pinpricks on the horizon. Perhaps 100,000 animals are within sight. Estes, who leaves his New Hampshire home to visit the Serengeti nearly every year during the May-June rut, still gasps at the sight. “Whew,” he exclaims, “that is what I call wall-to-wall wildebeest.”

Clusters of five to 50 cows and calves are resting or grazing. Each small herd is overseen by a territorial bull, patrolling continuously with his head held high, frequently in a rocking canter. For the duration of the rut, territorial bulls within smelling distance of cows will barely pause long enough to munch a mouthful of grass. They chase young males out of their domain and herd the cows in. They must remain constantly on guard to repel cow-rustling rivals, often in violent head-to-head combat.

“Just watch those two,” says Estes, “they’re going to bash heads.” As if on cue, two wildebeest bulls accelerate head-on, hunker down on their knees and clash. The impact of the two horn bosses splits the air. When no neighbor is available for sparring, the testosterone-overdosed males attack the ground and raise up horns festooned with grass. Some become so worked up that they froth at the mouth. “It’s total mayhem,” says Estes with boyish delight. “The rut is one of the greatest mammalian events.”

The bulls’ motto for breeding success seems to be “location, location, location.” The animals must hold a sufficiently attractive piece of real estate to encourage cows to linger until they are ready to mate or to stay for multiple copulations if they are already in estrus. Throughout this period, the air pulsates with the the bulls’ deep, guttural grunting. The cumulative effect rumbles “like waves against a headland,” says Estes, creating perhaps the loudest noise of any assemblage of antelope in the world.

When Estes first witnessed the rut in 1964, he developed his theory that the big hum brings on an epidemic of estrus. “The calling of the bulls was so conspicuous,” he says, “there had to be a reason.” Technology to test the hypothesis was not available in the 1960s, so Estes began answering other questions about wildebeest life—such as why cows give birth to calves out in the open amidst their noisy herd (which means wobbly newborns must be up and running in as little as three minutes) and why female wildebeest sport horns, fake “penile tufts” of hair on their bellies and other masculine traits. Estes suggests these characteristics evolved to make young males less conspicuous to dominant bulls that might drive the youngsters away from the safety of the herd. 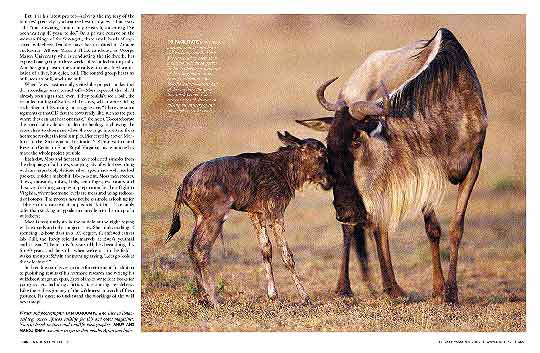 Given enough lives, Estes would shower all African mammals with equal scientific devotion. As he drives across the plains, he sings the praises of each species he passes, enthusing that “elephants are endlessly entertaining” and that “warthogs have got terrific character.” During pauses in his wildebeest studies, the zoologist has conducted formal research on Thompson’s gazelle, wild dog, topi, Grant’s gazelle and giant sable. He even discovered a warthog scent gland that turned out to be shared among all swine—and that had gone unnoticed in the 7,000 years since pigs were domesticated.

Estes’s encyclopedic interests are showcased in his 1991 Behavior Guide to African Mammals. To write it, he spent 13 years condensing the knowledge of more than 600 scientists and dozens of his own observations into a 611-page book. He followed it with The Safari Companion, a field guide for tourists and other laymen. According to Duncan Butchart, a scientific consultant for Conservation Corporation Africa—which runs award-winning safari lodges in six countries—the behavior book is “by far the best tool for use in the field by our guides.”

But it is his latest project—solving the mystery of the females’ precisely synchronized estrus cycles—that Estes calls “the crowning point of my research, something I’ve been waiting 40 years to do.” On a private reserve on the western fringe of the Serengeti, three small herds of captured wildebeest females have been isolated in 25-acre enclosures. Allison Moss, a Ph.D. candidate at George Mason University who is conducting the fieldwork, has exposed one group to three weeks of recorded rutting calls. Another group heard the same calls with the added stimulation of a live, but quiet, bull. The control group hears no bull, sees no bull, smells no bull.

When Estes most recently visited the project—a day that the recordings were turned off—Moss reported that she’d already seen signs that, even if they couldn’t see a bull, the recorded rutting calls affected the cows, which were sniffing each other and becoming more aggressive. “There are some segments of that CD that the cows really like, such as the part where they can just hear one male,” she notes. To corroborate the anecdotal evidence, modern technology is allowing the researchers to determine when the cows go into estrus from hormone residues in fecal samples. Pioneered by Steven Monfort at the Smithsonian Institution’s Conservation and Research Center in Front Royal, Virginia, this technique has made the whole project possible.

Each day, Moss and her staff have collected samples from the droppings of all cows, scooping bits of wildebeest dung with an improbably delicate silver spoon into well-marked packets. Inside a makeshift lab-in-a-tent, Moss then freezes, thaws, measures, mixes, boils, centrifuges, evaporates and dissolves the dung samples in preparation for their flight to Virginia, where hormone levels are measured using radioactive isotopes. The process may not be as simple as looking for a blue stripe on an ovulation predictor kit, but it’s certainly safer than sticking a hypodermic needle into the rump of a wildebeest.

Moss is frequently up in the middle of the night coping with leopards and other project crises. She thinks nothing of spending 12-hour days in a 100-degree, fly-infested canvas lab. Still, the hardy scientist marvels at Estes’s youthful enthusiasm. “The man is 76 years old, he’s been doing this for 40 years, and he still—when we’re out in the field—wakes me up at 5:30 in the morning saying, ‘Let’s go look at the wildebeest!’”

Such enthusiasm leaves no time for retirement. In addition to publishing results of his hormone research and writing his wildebeest magnum opus, Estes plans to write four books for young readers, including a fictional tale starring a wildebeest. Like the endless journey of the wildebeest in search of fresh pastures, his quest to understand the workings of the wild never stops.

Writer and photographer Don Boroughs, who lives in Johannesburg, covers African wildlife for this and other magazines.