Wake Up!! Sleep Secrets from the Animal Kingdom

Studies of species from orcas to thrushes are teaching us about human sleep needs. 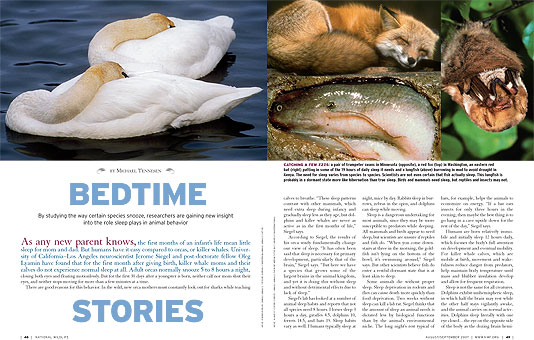 Orcas: Those Wakeful Whales
Humans are born pretty helpless and apparently very tired, because newborns sleep around 12 hours a day. Why? To keep the body’s full attention on development and eventual mobility. But, the first months of life don’t work that way for all creatures. Consider orca, a.k.a. killer whale, calves. They start swimming at birth, and for the first month or so of their lives stay awake and on the move with hardly a break. All that activity helps them stay clear of predators and maintain their body temperature until their size and their blubbery insulation develop and allow. Movement also keeps them breathing properly in a watery environment in which young calves can drown.

Does Orca Sleep Differ from That of Humans?
You better believe it does! A lot. University of California–Los Angeles neuroscientist Jerome Siegel and post-doctorate fellow Oleg Lyamin have found that for the first month after giving birth, killer whale moms and their calves don’t get a wink of normal sleep, not ever, not at all. Adult orcas normally snooze 5 to 8 hours a night, closing both eyes and floating motionlessly. But for the first 30 days after a calf is born, forget about it, neither babe nor mom shut their eyes, and neither stops moving for more than a few minutes at a time, because new orca mothers must constantly beware of sharks and teach calves to breathe.

It’s a Fact: We Need Shut Eye
For unknown reasons, closed eyes seem to be a prerequisite for most forms of sleep.


Missed Sleep: It Can Be a Killer
Going a month without sleep may be child’s play for an orca calf, but some animals die without proper sleep. Rodents and flies can die more quickly from lack of sleep than from lack of food. Two sleepless weeks can kill a lab rat. Siegel thinks that the amount of sleep an animal needs is dictated less by biological functions than by the animal’s environmental niche. The long night’s rest typical of bats, for example, helps the animals save energy. Siegel: “If a bat eats insects for only three hours in the evening, then maybe the best thing is to go hang in a cave upside down for the rest of the day.”

Different Sleep for Different Creatures
In case you haven’t noticed yet, sleep is not the same activity for one creature as it is for another. How peculiar is this: In dolphins, half the brain may rest while the other half stays wide awake; meanwhile, the dolphin carries on normal activities. Dolphins sleep literally with one eye closed—the eye shuts on the side of the body opposite the dozing brain hemisphere, since the right-brain hemisphere works the left eye and vice versa. Like killer whales, dolphin calves spend less than 1.5 percent of their time snoozing shortly after birth but gradually increase to 16 percent by three months. 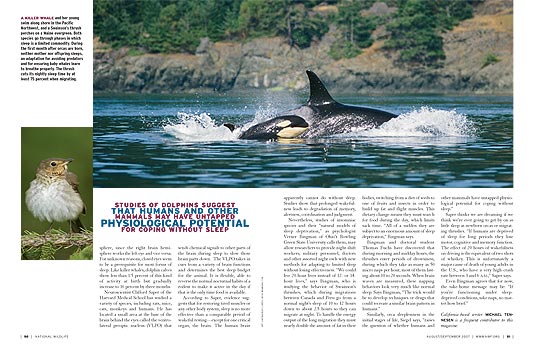 Why the Human Brain Needs Sleep
Neuroscientist Clifford Saper—a Harvard Medical School researcher who has studied a variety of species, including rats, mice, cats, monkeys and humans—says evidence suggests that sleep is no more effective for restoring tired muscles or any other body system than is a similar period of wakeful resting—except for one critical organ: the brain. The human brain apparently cannot do without sleep. Studies show that going too long without sleep makes memory, alertness, coordination and judgment decline. So if you are reading this late at night, go to bed!  The text will still be here in the morning.


Ponder This Risk of Missing Sleep

“If humans are deprived of sleep for long periods they lose motor, cognitive and memory function. The effect of 20 hours of wakefulness on driving is the equivalent of two shots of whiskey.” – Harvard neuroscientist Clifford Saper


What Sleepless Species Teach Humans
Studies of creatures that normally undergo periods of sleeplessness may allow researchers to provide night-shift workers, military personnel, doctors and other assorted night owls with new methods for adapting to limited sleep without losing effectiveness. “We could live 20-hour lives instead of 12- or 14-hour lives,” says psychologist Verner Bingman of Ohio’s Bowling Green State University.

How Much Sleep for Whom?
A sleep lab at the University of California-Los Angeles has looked at a number of animal sleep habits and reports that not all species need 8 hours a day. Some sample sleep needs:

The All-nighter Bird Catches the Worm

Bingman is studying Swainson’s thrushes, which during migrations between Canada and Peru go from a normal night’s sleep of 10 to 12 hours down to about 2.5 hours. To handle the energy output of the long migration they must nearly double the amount of fat in their bodies, switching from a diet of seeds to one of fruits and insects. This dietary change means they must search for food during the day and fly at night, which limits sack time. Bingman: “All of a sudden they are subject to an enormous amount of sleep deprivation.”

Thrushes Take Many Naps
Bingman and doctoral student Thomas Fuchs have discovered that during morning and midday hours, the thrushes take as many as 50 micro naps per hour, most lasting about 10 to 20 seconds. Brain monitoring shows that these napping behaviors look very much like normal sleep. Bingman: “The trick would be to develop techniques or drugs that could recreate a similar brain pattern in humans.”