Getting to Know North America’s Rarest Mammal: The Black-footed Ferret 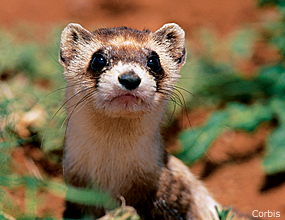 The black-footed ferret is North America’s rarest mammal and one of its most elusive, a small predator that feeds on animals nearly its own size. Found nowhere else in the world, the species is an American original. Here are 13 ferret facts you may want to know.


1. The black-footed ferret (BFF), a member of the weasel family (which includes otters and wolverines), grows up to 30 inches long, including its tail, and weighs up to two-and-a-half pounds.

2. Ferrets probably got their start 3 or 4 million years ago in Europe and came to North America at least 100,000 years ago via the Bering Land Bridge, which connected Siberia to Alaska during the most recent ice age.

3. Once established in North America, the BFF ranged from the prairies of southern Canada to Texas (perhaps even into northern Mexico), and from the Rockies east into the Dakotas, living in a dozen states and two Canadian provinces.

4. In North America, the ferret became a specialist in preying on prairie dogs. It lives in prairie dog towns, coming out at night to hunt. A family of four can pack away an average of some 760 prairie dogs yearly. 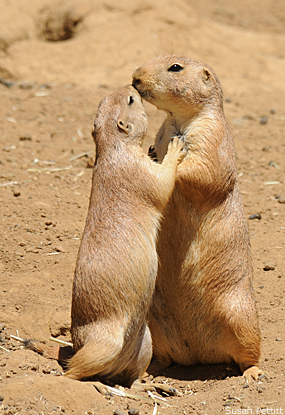 5. The grasslands favored by North America’s three prairie dog species once covered 100 million of the 500 million acres of western rangeland.

6. Travelers in the 19th-century West passed through prairie dogs up to 50 miles wide and 250 miles long.

7. Agriculture and poisoning of prairie dogs (because settlers saw them as competitors for livestock forage and were feared their burrows as a source of broken legs for cattle and horses) have reduced occupied ferret range to less than 2 percent of its their original extent. Today, the BFF is one of the world’s most endangered mammals.

8. Black-footed ferrets have always been rare for as long as they’ve been known. Between 1851, when the species was first recognized by naturalists, and 1896, only six specimens (all skins) accounted for everything known about the animals.

9. BFFs have been declared extinct several times in the recent past, including in the 1960s and 1970s.

10. In 1981, on a ranch near the town of Meeteetse in northwest Wyoming, a dog named Shep came home carrying a dead ferret. This discovery caused quite a to-do among biologists, who had suspect the species was extinct. Researchers soon located a population of about 130 ferrets near Meeteetse. Eighteen of these ferrets were taken into captivity between 1985 and 1987 for captive breeding.

12. According to the U.S. Fish and Wildlife Service, the captive breeding program keeps a core population of at least 240 adults (90 males, 150 females; the current total is around 290) housed in six locations across the United States and Canada.