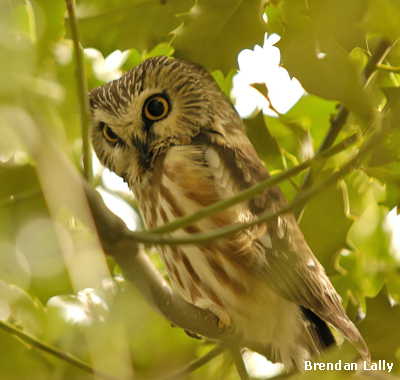 IT'S 3 A.M. IN DEEP LOBLOLLY PINE WOODS near Cape Charles on Virginia's Delmarva Peninsula. Dankness wafts through the forest on this November night. In the darkness, researcher Fletcher Smith points to a 36-foot-long mist net strung between steel poles. Caught in the netting are two tiny northern saw-whet owls. Their eyes blink at us in the glare of flashlights we hastily turn off. Smith attracted the birds using recordings of saw-whet owl calls on a tape player placed in covered plastic buckets beneath the nets. These hoots—which sound like a saw being sharpened by hand—bring in the raptors.

A biologist for The Center for Conservation Biology at The College of William & Mary and Virginia Commonwealth University, Smith collaborates with a group of dozens of professional and citizen scientists researching the autumn migration of northern saw-whet owls. The birds breed primarily in North American boreal forests and winter in mid- to upper-latitudes of the United States and Canada. The effort, launched by David Brinker of the Maryland Department of Natural Resources and known as Project Owlnet, has been monitoring the birds for more than 25 years at stations across the continent. Now numbering about 120, most of these sites are located along the owls' Atlantic Coast flyway. Cape Charles is the southernmost continuously staffed outpost.

"The number of saw-whets caught at Project Owlnet stations is a good indicator of trends in the species" population size," Smith says. Because the owls stay hidden in conifers except during migration, it's hard to spot them in other counts such as breeding bird surveys. Network scientists also are documenting the cyclical nature of saw-whet migrations. "In some years, we catch very few owls, in other years hundreds and sometimes a thousand," Smith says.

How far south the owls go during winter depends on food supplies—mice and other small rodents—in boreal forest breeding grounds. When there is ample food, owls do not make it to Virginia. But when food supply drops, especially after a productive breeding season, large numbers sometimes migrate as far south as Alabama and Georgia.

The pine forests of western Maryland once were considered the southern limit of the owls' wintering grounds. But during the 1990s, biologists at Cape Charles began documenting saw-whets. "Coastal forests here are very important to the owls," says Smith. He and colleagues learned that saw-whets stop by the Delmarva's piney woods—sometimes for as long as 10 days—before either crossing open water or heading back up the peninsula to migrate down the western shore of the Chesapeake. Such information may affect future policy decisions, such as where to build wind farms.

Farther north, other places where land meets water are also critical migratory stopover points. Scientists at Maine's Biodiversity Research Institute, for example, found that saw-whets regularly use fir-topped islands in the Gulf of Maine during migration."

In Virginia's loblolly pines, researchers head out on net checks at 9 p.m., midnight, 3 a.m. and 6 a.m. "In case you forgot how to pull an all-nighter, you're about to relearn," Smith says. Each owl caught is measured, weighed, banded and released.

At 4 a.m., the fifth of eight owls researchers will capture tonight is all-systems-go, flapping its diminutive wings. Smith carefully holds its talons and opens his hand, and the little bird flitters to a nearby cedar tree. There it lands, shakes once to settle its ruffled feathers and takes off into the predawn blackness. With luck, it will be miles away by sunrise, safely on the far side of a Chesapeake crossing.