On the Trail of Native Bees

With no paid staff or budget, a federal biologist launches an effort to assess the status of more than 4,000 wild bee species—animals vital to both agriculture and healthy ecosystems 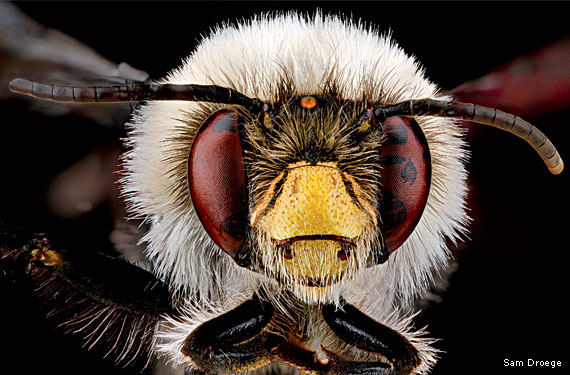 PINNED IN TIDY ROWS inside a plain-white pizza box, the two dozen bees biologist Sam Droege shows a visitor had traveled far since they were foraging a year ago in California’s San Dimas Experimental Forest. Attracted by bright colors painted inside the rims of plastic beer cups, the insects flew into a water-soap-glycol solution at the bottoms of the cups. Two weeks later, U.S. Forest Service (USFS) employees strained out the specimens, placed them in plastic whirl paks and mailed the packages to Droege’s lab at the U.S. Geological Survey’s (USGS) Patuxent Wildlife Research Center in Maryland. During the following months, volunteer technicians washed and dried each insect to remove all dirt and debris. “A bad-looking bee is hard to identify,” Droege explains.

He should know. For the past decade, it has been Droege’s job to ID more than 300,000 bees sent to his lab from around the country. Identifying the specimens is key to the biologist’s current life’s work: establishing an inventory and monitoring program for the nation’s more than 4,000 native bee species. “Nothing so ambitious ever has been attempted before,” says Mace Vaughan, pollinator program director at the Xerces Society for Invertebrate Conservation. According to Droege, a USGS-USFS pilot project at 20 sites, including San Dimas, shows that by standardizing methods and enlisting volunteers, the full-scale inventory can be done both reliably and inexpensively—a good thing given he has neither a budget nor staff so far.

Compared with other animal species—even insects such as butterflies and dragonflies—bees are poorly known scientifically. Unlike those large, popular invertebrates, bees must be captured and examined with expensive microscopes to be identified. Even then, distinguishing one species from another involves, in Droege’s words, “a horrendous amount of minutia” that only a handful of experts have mastered.

Yet knowing the status of wild bees is vital. Not only are bees the most important pollinators in natural ecosystems—essential to the reproduction of nearly 70 percent of all flowering plants—they’re needed to produce more than a third of all foods and beverages humans consume. “In the United States alone, native bees contribute at least $3 billion a year to the farm economy,” Vaughan says. “We grossly overlook the critical role these animals play.”

Seven years ago, when European honeybees began to decline nationwide, many press reports warned that native bees also were disappearing. Yet—except for several bumblebee species that undeniably are in trouble—no baseline data exist on indigenous bee populations in this country and how they are changing over time. 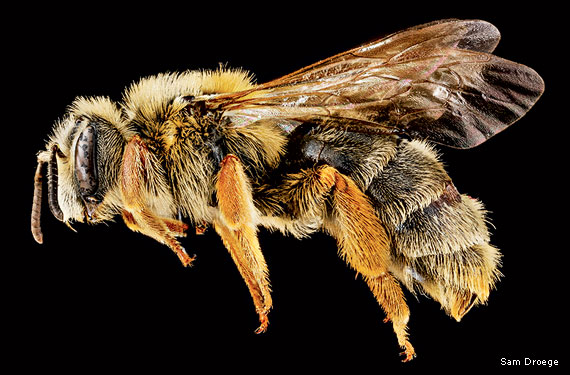 In a study published last year in the Journal of the Kansas Entomological Society, Droege and his colleagues discovered a bit of good news. After compiling a list of 770 bee species historically found in the eastern United States, they consulted with regional experts and found that 95 percent have been spotted again within the past two decades. Because the study did not address whether species are declining, the report “does not warrant complacency,” the scientists concluded.

Droege’s project, which he hopes to scale up soon, should reveal within a decade how most North American wild bees are faring. Meanwhile, he remains optimistic. Because the majority of native bees are solitary—and therefore less susceptible to pests and diseases plaguing colony-dwelling honeybees and bumblebees—“my gut feeling is that most natives are doing fine,” Droege says. “But so far, we just don’t know.”

See a slideshow of close-up images of native bees.

Certify your yard and welcome pollinators. >