When Water Is Gone 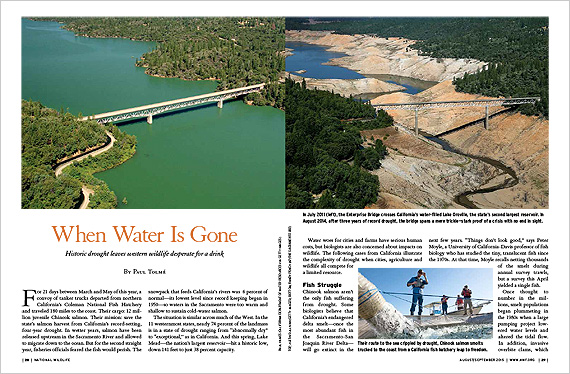 FOR 21 DAYS BETWEEN MARCH AND MAY of this year, a convoy of tanker trucks departed from northern California’s Coleman National Fish Hatchery and traveled 180 miles to the coast. Their cargo: 12 million juvenile Chinook salmon. Their mission: save the state’s salmon harvest from California’s record-setting, four-year drought. In wetter years, salmon have been released upstream in the Sacramento River and allowed to migrate down to the ocean. But for the second straight year, fisheries officials feared the fish would perish. The snowpack that feeds California’s rivers was 6 percent of normal—its lowest level since record keeping began in 1950—so waters in the Sacramento were too warm and shallow to sustain cold-water salmon.

The situation is similar across much of the West. In the 11 westernmost states, nearly 74 percent of the landmass is in a state of drought ranging from “abnormally dry” to “exceptional,” as in California. And this spring, Lake Mead—the nation’s largest reservoir—hit a historic low, down 141 feet to just 38 percent capacity.

Water woes for cities and farms have serious human costs, but biologists are also concerned about impacts on wildlife. The following cases from California illustrate the complexity of drought when cities, agriculture and wildlife all compete for a limited resource.

Chinook salmon aren’t the only fish suffering from drought. Some biologists believe that California’s endangered delta smelt—once the most abundant fish in the Sacramento-San Joaquin River Delta—will go extinct in the next few years. “Things don’t look good,” says Peter Moyle, a University of California-Davis professor of fish biology who has studied the tiny, translucent fish since the 1970s. At that time, Moyle recalls netting thousands of the smelt during annual survey trawls, but a survey this April yielded a single fish.

Once thought to number in the millions, smelt populations began plummeting in the 1980s when a large pumping project lowered water levels and altered the tidal flow. In addition, invasive overbite clams, which compete with smelt for algae, and silverside fish, which eat smelt eggs, proliferated. Habitat restoration projects and pumping restrictions imposed to save the smelt have not worked. “Pumping changed the hydrology of the delta,” Moyle says. “Historically the rivers flowed out to sea and the tides pushed water back up. The smelt rode those tides. Now water flows across the delta. In some respects the delta is now a warm lake. That’s very confusing to a fish trying to migrate upstream to spawn.” The current drought may be the final nail in the coffin for smelt, the only survivors being specimens kept in researchers’ tanks for posterity. 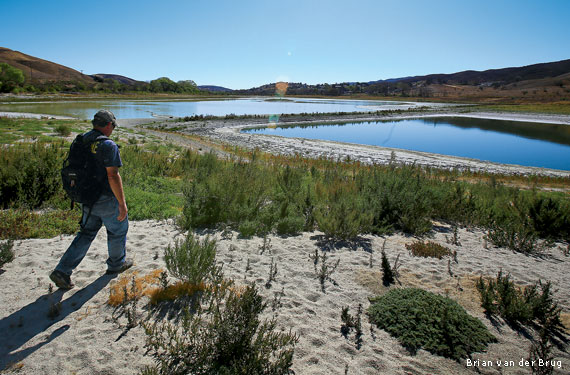 Some populations of California’s native turtle—known as the Western or Pacific pond turtle (below)—are also in jeopardy due to lakes drying up. “We might see local extinctions,” says Paul Gibbons, managing director of the Turtle Conservancy. Of particular concern is a population in Elizabeth Lake, which some experts say may hold the largest population of the turtles in southern California. 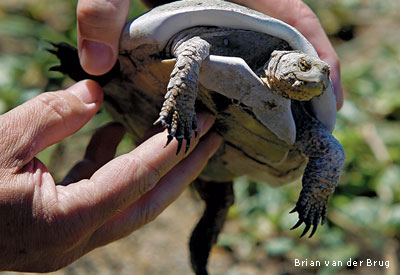 Recent testing identified this population as genetically distinct, but by last year, drought had shrunk the lake to a few feet of salty, alkaline water, threatening the turtles’ survival. As part of a rescue mission aided by the California Department of Fish and Wildlife, biologists from the Turtle Conservancy and University of California–Los Angeles helped remove 60 of the turtles from the lake and housed them in tanks at the university and at a Turtle Conservancy facility. The goal was to return the animals to the lake, but due to a lack of rain to replenish the water, they were released at a nearby site this May.

A keystone species of California’s Carrizo Plain National Monument, giant kangaroo rats are starving as drought turns these once-vast grasslands into desert, depriving the rodents of plants and seeds they depend on for food. Before the drought, researchers estimated the rodent’s population in the hundreds of thousands, with up to 100 of the animals per acre. That number had fallen to only seven per acre this spring—a crisis for the entire ecosystem.

Giant kangaroo rats are a main prey source for endangered San Joaquin kit foxes as well as for coyotes, raptors, snakes, weasels and other predators. In addition, the rats’ burrowing churns up nutrient-rich soils that lead to higher levels of plant and invertebrate diversity. Due to habitat loss outside the national monument, the Carrizo Plain kangaroo rat population is the largest remaining in California, says Justin Brashares, a professor of wildlife ecology at the University of California–Berkeley. “If we lose this population, we could see federal support for the start of a captive-breeding population.”

Drought is hitting shorebirds, waterfowl and wetland-dependent songbirds hard in California, whose large size and range of ecosystems provides habitat for more than 600 bird species. One of particular concern is the tricolored blackbird. California granted it an emergency endangered-species listing in 2014 after the population plunged by 60 percent to approximately 145,000. “Drought is definitely a factor,” says Andrea Jones, director of bird conservation for Audubon California. There isn’t enough water in the birds’ wetland habitats, and the farm fields where they nest have dried up. 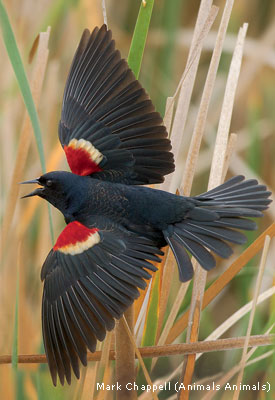 Waterfowl also suffer as wetlands and fields wither. In California’s Central Valley, rice fields flooded with water after the fall harvest provide winter habitat for millions of birds. Yet U.S. Fish and Wildlife Service (FWS) scientist Greg Yarris estimates the amount of flooded rice-field acreage is down two- to threefold from water-rich years to about 100,000 acres and says waterfowl populations appear to have moved eastward away from the worst drought-stricken farms. With water allotments to farms diminishing, “this is going to be a bad winter for geese and other waterfowl,” Audubon’s Jones says.

Shorebirds are hurt by lower water levels in California’s Mono Lake and Salton Sea, where increased salinity is killing the brine shrimp and brine flies that are an important food source. Ninety percent of North America’s eared grebes and 30 percent of the nation’s great white pelicans winter on the Salton Sea. “If they can’t find enough habitat and food, I don’t know where they will go,” Jones says.

Drought can also spawn disease. Communicable diseases including avian cholera are rising as birds concentrate around smaller water sources. Last year in California, an estimated 10,000 band-tailed pigeons died from avian trichomonosis, and up to 20,000 waterfowl died of avian botulism, both cases linked to drought.

Few species are spared. Parched mountain lions drink from backyard birdbaths. Diminished snowpack in the West means less denning habitat for wolverines and lynx, and snow-free mountains allow coyotes and other lowland predators to reach alpine areas, increasing food competition. “We are seeing fewer moose and elk births in Wyoming because they aren’t getting enough nutrition to conceive,” says John Gale, conservation director for Backcountry Hunters and Anglers. In the Southwest, conservationists are installing more rainwater collecting “guzzlers” to save desert bighorn sheep populations whose water has disappeared.

“Water scarcity is increasingly going to be the face of climate change in California and the dry West,” says Bruce Stein, senior director of NWF’s Climate Adaptation and Resilience Program. “We need to be less wasteful, and we have to leave some water for wildlife.”

That includes California’s Sacramento River, where water withdrawals for urban and agricultural use have contributed to the current salmon crisis. With luck, the fish trucked to the coast this year will thrive in the Pacific and return to their spawning grounds three years from now. What they will find remains to be seen.

Writer Paul Tolmé wrote about the 50th anniversary of the Wilderness Act in the October/November 2014 issue.