How NWF and our affiliates strive to save national treasures 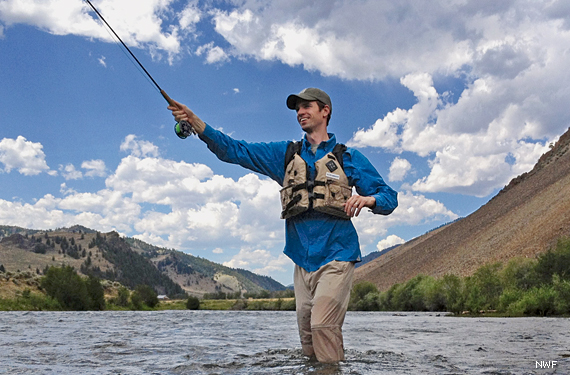 IT'S OFTEN SAID THAT PUBLIC LANDS are the birthright of all Americans—and the envy of the world. Who can forget their first trip to Yosemite or Yellowstone, fishing or birding at a national wildlife refuge, or hiking in a national forest? I’ll never forget the sense of wonder that my daughter Riley had picking blueberries atop Beehive Mountain at Acadia National Park, laughing while seeing magpies at Rocky Mountain National Park, or watching avocets and stilts at the Bombay Hook National Wildlife Refuge along the Delaware Bayshore.

For more than a century, Americans have enjoyed our nation’s public lands—critical natural resources, contiguous stretches of wildlife habitat, unique geologic formations, diverse recreational experiences and historically significant sites—because our nation’s visionary leaders prioritized their protection. These lands are not only protected for the benefit of our current and future generations, but are also accessible to all visitors, not just the privileged few.

By any metric, the benefits of conserving these lands are overwhelming. For wildlife, they provide critical habitat for thousands of native species. Economically, public lands support more than 2 million jobs and billions of dollars of economic activity—and that’s not quantifying the richness of the experiences of hundreds of millions of visitors annually. Despite all this, a growing number of politicians are working to degrade or sell off our public lands for resource extraction and development. The Dickensian dissonance is deafening.

On one hand, the U.S. Department of the Interior is making great strides on improving the management of public lands. For example, the Bureau of Land Management has been developing Master Leasing Plans, which have the potential to ensure that energy development occurs in ways that reduce impacts on ecosystems to the benefit of wildlife like bighorn sheep, elk, mule deer, sage grouse and pronghorn.

The administration has also designated a series of new national monuments and is considering others—and the National Wildlife Federation’s state affiliates have often been leading this charge. For example, the New Mexico Wildlife Federation built support from thousands of hunters and anglers for permanent protection of Río Grande del Norte and Organ Mountains-Desert Peaks National Monuments, both of which the president designated in the past two years. In September, the White House expanded Pacific Remote Islands Marine National Monument, which the Conservation Council for Hawai‘i—an NWF affiliate—helped promote.

I’m proud that NWF is working with its state affiliates to protect such critical habitats. In July, I had a chance to fly-fish in the awe-inspiring Boulder-White Clouds area, which the Idaho Wildlife Federation is working hard to have designated as a national monument. We are also working with the Colorado Wildlife Federation on protecting Browns Canyon and with the West Virginia Rivers Coalition on designating the Birthplace of Rivers. We were especially gratified when, in October, President Obama designated part of California’s spectacular San Gabriel Mountains as a national monument, a move that NWF advocated to protect valuable habitat for mountain lions, Nelson bighorn sheep and other species.

On the other hand, as more politicians advocate selling off public lands, we find ourselves having to explain why these lands matter. Across the nation, we’re working hard against federal and state legislation that would undermine a century of progress. In May of this year, our affiliates unanimously passed a resolution affirming their strong support for public lands and against their sale or transfer, and NWF is teaming with former Secretary of the Interior Ken Salazar and other leaders to make a strong defense.

Protecting public lands for future generations is a fight worth fighting, and we need your support. This isn’t a partisan issue—it’s about basic wildlife conservation and democratic access. Let’s keep public lands in public hands and pass on a conservation legacy worthy of the amazing bounty that previous generations provided. See you outdoors!