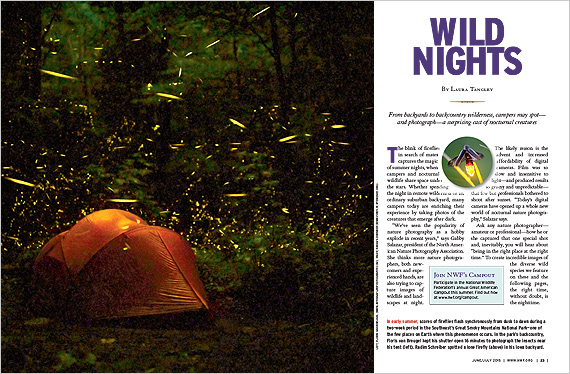 THE BLINK OF FIREFLIES in search of mates captures the magic of summer nights, when campers and nocturnal wildlife share space under the stars. Whether spending the night in remote wilderness or an ordinary suburban backyard, many campers today are enriching their experience by taking photos of the creatures that emerge after dark.

“We’ve seen the popularity of nature photography as a hobby explode in recent years,” says Gabby Salazar, president of the North American Nature Photography Association. She thinks more nature photographers, both newcomers and experienced hands, are also trying to capture images of wildlife and landscapes at night. The likely reason is the advent and increased affordability of digital cameras. Film was so slow and insensitive to light—and produced results so grainy and unpredictable—that few but professionals bothered to shoot after sunset. “Today’s digital cameras have opened up a whole new world of nocturnal nature photography,” Salazar says.

Ask any nature photographer—amateur or professional—how he or she captured that one special shot and, inevitably, you will hear about “being in the right place at the right time.” To create incredible images of the diverse wild species we feature below, the right time, without doubt, is the nighttime. 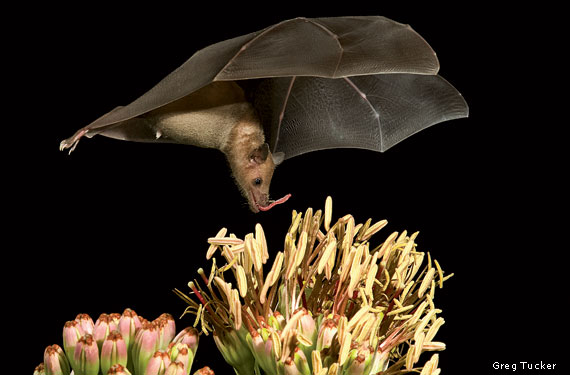 Hoping for a midair meal, a lesser long-nosed bat flicks its tongue at an agave bloom near Tucson, Arizona. These bats feast on nectar and pollen from flowers of native cacti and agaves. To make this photo, Greg Tucker mounted his camera on a tripod focused on the flower, then fired his shutter remotely when the bat approached. “Lacking the ability to hover, the bat used its long tongue to extract as much nectar as possible with each passing,” Tucker says. 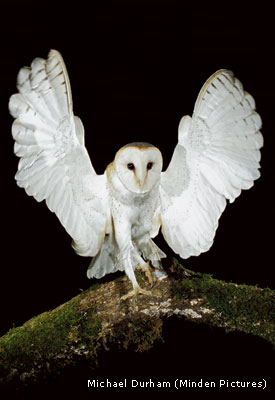 Ready for take off (and dinner), a barn owl on Oregon’s Sauvie Island prepares to attack prey. This image was captured when the owl triggered a remote camera’s motion sensor and flash. Photographer Michael Durham prepared for the shot by drilling holes in a fallen log and stuffing them with peanut butter to attract rodents, a favorite prey of barn owls, which are strictly nocturnal hunters. Durham set up the camera and left for a week. Upon my return,” he says, I had exactly two photos. Both had the owl in the frame. 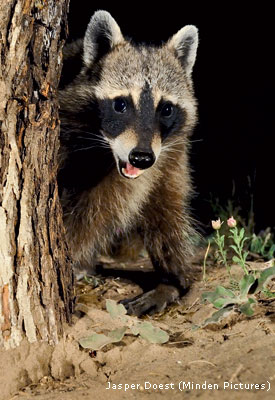 A timely peek around a tree yields a playful portrait of a common raccoon in Texas. Adaptable animals that thrive near humans, raccoons are one species campers are almost sure to see after sunset, even in their own backyards. Still, it took effort for Jasper Doest to capture this “intimate point of view.” First, he placed a remote-controlled camera with a wide-angle lens outside a blind. Before entering the blind, he focused manually on the tree trunk, “hoping the raccoons would be curious enough to start looking at my camera.” Indeed, this one was. 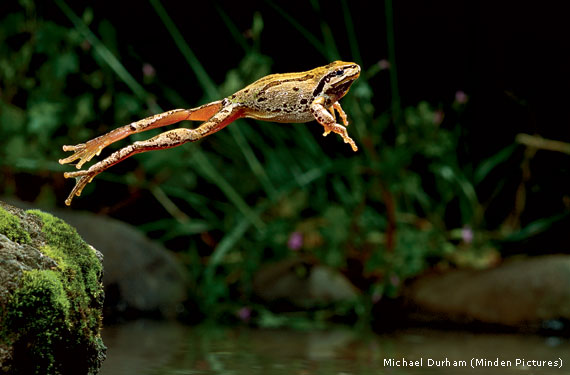 A solo game of leapfrog animates the night as a tiny chorus frog blasts off. At less than 2 inches long, these secretive, nocturnal frogs are more often heard than seen. Nonetheless, Michael Durham was able to capture this one in midjump by spending time next to a friend’s backyard pond in Tualatin, Oregon. “Although I was using specially designed, high-speed flash units,” he says, “getting the image was mainly a matter of timing—and trying many times. 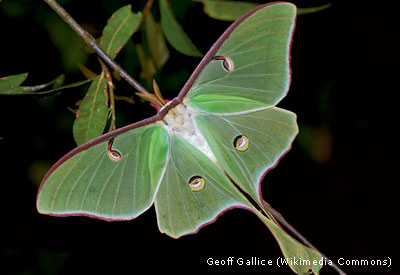 With symmetrical grace, a luna moth rests on a branch during a balmy night in Florida, where Geoff Gallice photographed the insect. Found across the eastern United States, this is one of about two dozen silk moth species native to North America. The life span of these nocturnal beauties is surprisingly brief: Because they lack mouths, silk moths cannot eat and live only a few short days just long enough to mate and lay the eggs that will carry on the line. 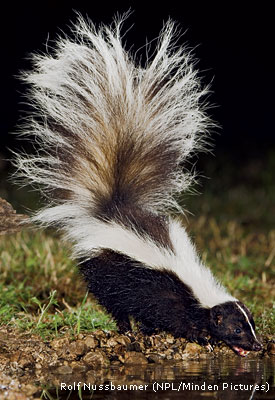 Sprayer at the ready, a striped skunk sips from a watering hole during a period of drought in Uvalde County, Texas. Rolf Nussbaumer photographed the animal at midnight using four flashes. Because a raccoon had arrived to drink at the same time, the skunk was on alert, says Nussbaumer, “keeping his tail up the whole time he enjoyed a refreshing drink. 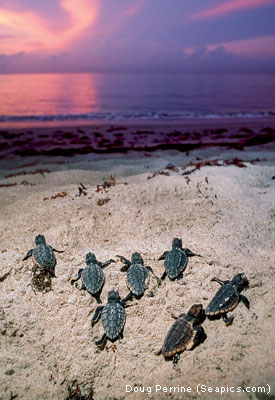 A dawn journey holds beauty and peril for loggerhead sea turtle hatchlings as they leave their nest and crawl toward the sea on Florida’s Juno Beach. It was just before sunrise in early summer when Doug Perrine spotted the turtles. He lit the foreground with a strobe, relying on natural light for the background. Containing 100 to 120 eggs, “most nests hatch at night, which is the safest time, says Perrine. But some of the baby turtles do not emerge with the rest of their cohort, struggling out later on their own.” Those that survive predation by crabs, gulls and other animals may one day return—and perhaps a patient photographer will be ready to capture the next generation. 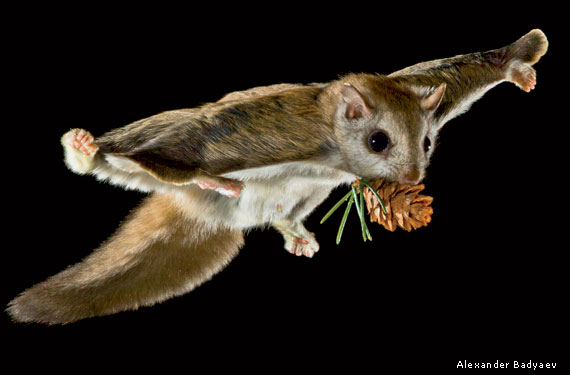 Not bird nor plane nor superhero, a northern flying squirrel carries a spruce cone as it glides between trees in Montana’s Bob Marshall Wilderness Area. “It often takes weeks to map and time the exact routes the animals take,” says biologist and photographer Alex Badyaev. “There’s a lot of waiting and hundreds of empty frames from mistimed camera firings. But when you get lucky, it is an incredible show of midair acrobatics.” 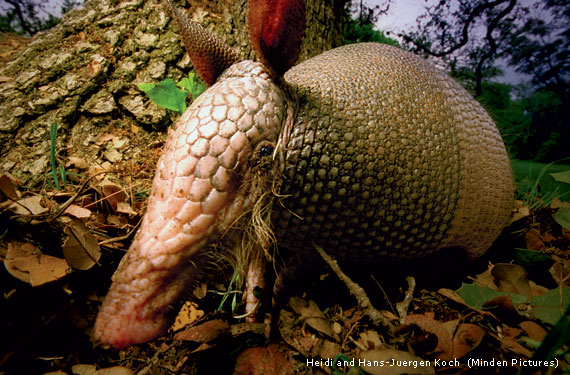 Caught up close and personal, a nine-banded armadillo snuffles through leaves on a hunt for beetles, roaches, snails and other food. Found throughout the southeastern United States, armadillos have been expanding their range northward for more than 100 years, with a handful spotted as far north as Nebraska and Illinois. To make this unusual portrait, Heidi and Hans-Jürgen Koch lay on the ground near the animal, which seemed used to people. They employed a single flash to lighten the foreground—a technique that also highlights the animal’s odd armor.

See amazing photos and enter your own in the 2015 National Wildlife Photo Contest!