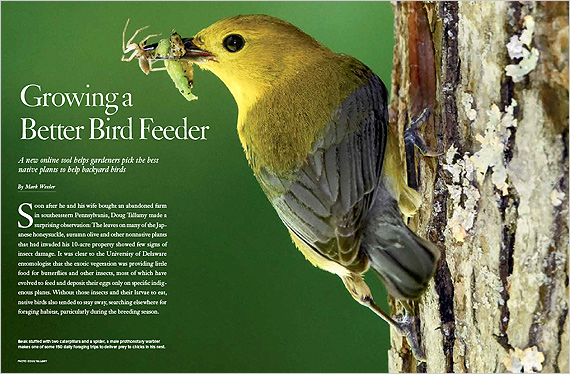 SOON AFTER HE AND HIS WIFE bought an abandoned farm in southeastern Pennsylvania, Doug Tallamy made a surprising observation: The leaves on many of the Japanese honeysuckle, autumn olive and other nonnative plants that had invaded his 10-acre property showed few signs of insect damage. It was clear to the University of Delaware entomologist that the exotic vegetation was providing little food for butterflies and other insects, most of which have evolved to feed and deposit their eggs only on specific indigenous plants. Without those insects and their larvae to eat, native birds also tended to stay away, searching elsewhere for foraging habitat, particularly during the breeding season.

“Ninety-six percent of all terrestrial birds rear their offspring on insects, primarily caterpillars,” Tallamy explains. To build “a better bird feeder” on his property, he began to investigate which trees and other plants host the greatest abundance and variety of insects so he could put in those plants after removing nonnative species.

Today, 15 years later, the farm’s woody native plants alone support at least 1,000 caterpillar species, and more than 50 bird species breed on the property. “I discovered at home that suburban restoration really works,” Tallamy says. “None of my academic training prepared me for how well and how fast it can happen.”

The National Wildlife Federation has long been aware of the important role suburban properties can play in wildlife conservation. According to a 2005 study by the Federation and its partners, roughly two-thirds of all North American wildlife species in the lower 48 states range within urban and suburban areas, including more than 500 rare or endangered animals that live only in large metropolitan areas. “To conserve biodiversity, we can no longer ignore the important role residential areas play,” says NWF Naturalist David Mizejewski. “Even those of us who only have small yards can make a difference for wildlife by planting native species around our homes.”

In suburban Chicago, landscape ecologist Amy Belaire and colleagues at the University of Illinois–Chicago reported similar results last year after surveying avian populations and landscaping in 25 Cook County communities during peak breeding season. “Our findings showed that when it comes to native bird diversity, having a neighborhood with many wildlife-friendly elements in yards is more important than having a neighborhood surrounded by parks or forest preserves,” she says. Her research revealed that residential areas with properties containing a variety of tree species attract twice as many bird species as nearby neighborhoods lacking such vegetation. 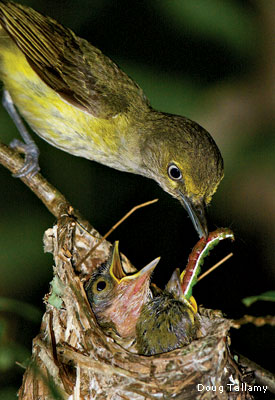 But those trees should be native. “Nonnative trees may sustain a few nonnative insects, but they don’t support the number and diversity of insects that birds need to reproduce,” Tallamy says. To confirm that hypothesis, he and his students tested the reproductive success of four native moth species on both native and exotic trees. Though the moths they studied are considered “generalists”—they feed and deposit eggs on a wide range of vegetation—all four reproduced best on oak, black cherry, plum and other native trees. Most of the nonnative trees failed to provide any nourishment for caterpillars, so they quickly died. On the few exotics that did sustain caterpillars until the end of the experiment, surviving larvae were significantly smaller than those on native plants.

For breeding birds, every caterpillar can count. Carolina chickadees, for instance, require more than 9,000 moth or butterfly larvae to successfully rear a single clutch of four to six offspring. What’s more, most chickadees forage no more than about 150 feet from their nests. “The more caterpillars a yard produces,” Tallamy says, “the greater the chances a bird will nest successfully.”

In the Mid-Atlantic region, native woody plants, on average, support 13 times more caterpillar species than plants not historically found in the region. Native oaks are the most productive of all, hosting a whopping 557 caterpillar species. By contrast, gingkoes, which are originally from China and line the streets of many U.S. urban areas, support only three species.

Two years ago, Tallamy began working with University of Delaware research specialist Kimberley Shropshire to expand the scope of his studies. In a highly ambitious project—a partnership between Tallamy, NWF and USFS—the scientists began tracking down the plant preferences of every Lepidoptera (butterfly and moth) species that ranges in the continental United States and Alaska—some 12,750 species. He and the Federation also joined forces to develop an online database to organize this research into scientifically accurate lists of wildlife-friendly plants for each of the nation’s roughly 3,000 counties. Such a tool is badly needed, Mizejewski says: “The number one question NWF receives from the public is, ‘Which plants are best for wildlife?’”

Scheduled for release this spring, the database will enable gardeners and others to search for native plants by zip code. As the primary funder, USFS is especially interested in the tool’s use for trees. “Selecting a tree to plant is a long-term decision that affects the future tree canopy of a city and the next generation of its residents,” says Elizabeth Larry, national leader of the USFS’s urban research program. “This tool makes it easier for property owners and tree-planting organizations to know which tree species have wildlife value.”

Each zip code in the database will include a list of native plants ranked in order by the number of caterpillars they host and broken down by woody and herbaceous species. Naomi Edelson, NWF’s senior director for wildlife partnerships, says that while previous guides have recommended native plants suitable for specific regions, “this is the first nationwide tool that tells people which species are valuable specifically to caterpillars—and therefore valuable to birds.”

Gardening for birds and other wildlife brings pleasure to human garden visitors as well. Almost every day, Tallamy and his wife stroll around their property and marvel at the creatures that come and go with the seasons. In springtime, brightly colored warblers, grosbeaks and other songbirds take turns serenading the couple. During summer, iridescent hummingbirds hover over the yard’s crimson blossoms, while woodpeckers tap out a steady beat on nearby trees. “We regularly see things we didn’t expect to see,” Tallamy says. “It’s very entertaining. It makes us smile. 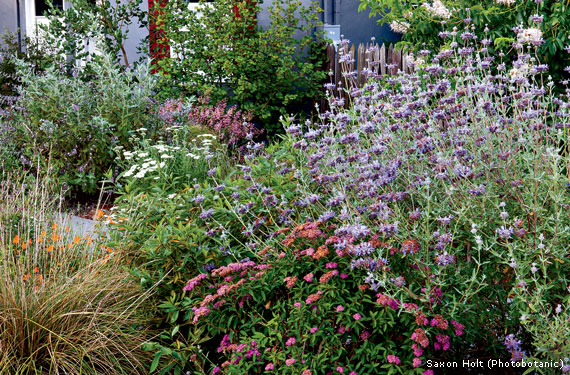 A flowering buckeye tree, Cleveland sage and other native plants adorn the Northern California yard of Nalani and Anna Heath-Delaney (above), attracting a variety of insects and the birds that eat them. The National Wildlife Federation has a new mobile friendly tool  to help you pick by zip code the best native plants that attract butterflies, moths and support the birds in your area. Visit www.nwf.org/nativeplantfinder.