Habitat Help in the Age of Zika

As peak mosquito season arrives, take steps to prevent disease without killing off the good bugs 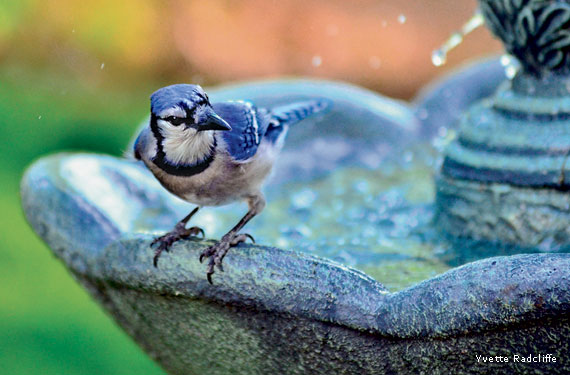 A blue jay perches after a dip in a suburban Virginia birdbath. With some planning, you can discourage mosquitoes and still provide backyard birds such relief during summer.

HEADING INTO THE HEART OF SUMMER, the mercury is rising—along with widespread fear about the mosquito-borne Zika virus. As this issue went to press in June, the Centers for Disease Control and Prevention (CDC) had confirmed more than 800 Zika cases in the continental United States—including more than 260 pregnant women—as well as a link between the virus and severe fetal abnormalities. Though no Zika-carrying mosquitoes had been detected on the U.S. mainland (victims got the disease elsewhere or through sex with infected partners), officials warned that as more travelers return from virus-infested countries in mosquito season, there’s a good chance for such “local transmission” before summer is over.

Conservationists, meanwhile, have additional concerns this season: “In many parts of the world, including the United States, spraying pesticides is the knee-jerk reaction to mosquito-borne disease,” says Scott Black, executive director of the Xerces Society for Invertebrate Conservation. “But the data from mosquito control efforts over the past 150 years show that spraying for adult mosquitoes does not work well—and it can have profound impacts on pollinators as well as on insects that are food for fish, birds and other wildlife.”

As an example, Black cites mosquito spraying as “a major factor” in the decline of Florida’s federally endangered Schaus swallowtail and Miami blue butterflies. In the Midwest, University of Minnesota biologist Karen Oberhauser found that monarch butterfly larvae reared on milkweed from an area sprayed for mosquitoes have significantly lower survival than average, even on leaves collected three weeks after spraying.

“Fortunately, what works best to control mosquitoes also is least harmful to wildlife and human health,” says Black, whose group helps communities develop mosquito management plans. The most important steps, he says, are to eliminate mosquito breeding sites and protect yourself with clothing and repellent.

Spraying, in fact, may worsen mosquito problems. Not only are the insects developing resistance to pesticides, the poisons also kill natural enemies of mosquitoes. “In healthy habitats, there is a balance,” says National Wildlife Federation Naturalist David Mizejewski. “You have pests like mosquitoes, but you also have predators and parasites that can keep mosquito numbers in check.”

Larvae of the mosquitoes that can transmit Zika (primarily Aedes aegypti, left) take a week to develop into blood-sucking adults (right). To keep them from maturing, change the water in your birdbath every two to three days or treat with a natural larvacide.

The Federation’s Garden for Wildlife™ program offers these tips for wildlife gardeners and others who want to spend time outdoors while minimizing their disease risk:

Eliminate the source: Once you find where mosquitoes breed, get rid of the water or, if not possible, treat with a larvacide such as the natural soil bacterium Bacillus thuringiensis (sold in granules or as mosquito “dunks”).

Target water features: “To keep mosquitoes from producing young in your birdbath, dump the water out—along with any eggs and larvae—every few days,” Mizejewski says. “You need to do that anyway to keep the water fresh for birds.” For backyard ponds, add a pump or fountain (mosquitoes prefer stagnant water) and treat with mosquito dunks.

Nurture native predators: “Both adult mosquitoes and larvae are on the menu for a wide variety of wildlife, from birds and bats to frogs, lizards and dragonflies,” Mizejewski says. “Planting native plants and taking other steps to support these predators can minimize the local mosquito population.”

Spread the word: No mosquito control program in the country has the money or staff to patrol every backyard. If you eliminate standing water in your yard, but your neighbor does not, you will still have to deal with mosquitoes and the diseases they can transmit.

This summer, Mizejewski is gardening in his Washington, D.C., yard as usual, but applies repellent before he heads outside. “I’m being much more vigilant,” he says.